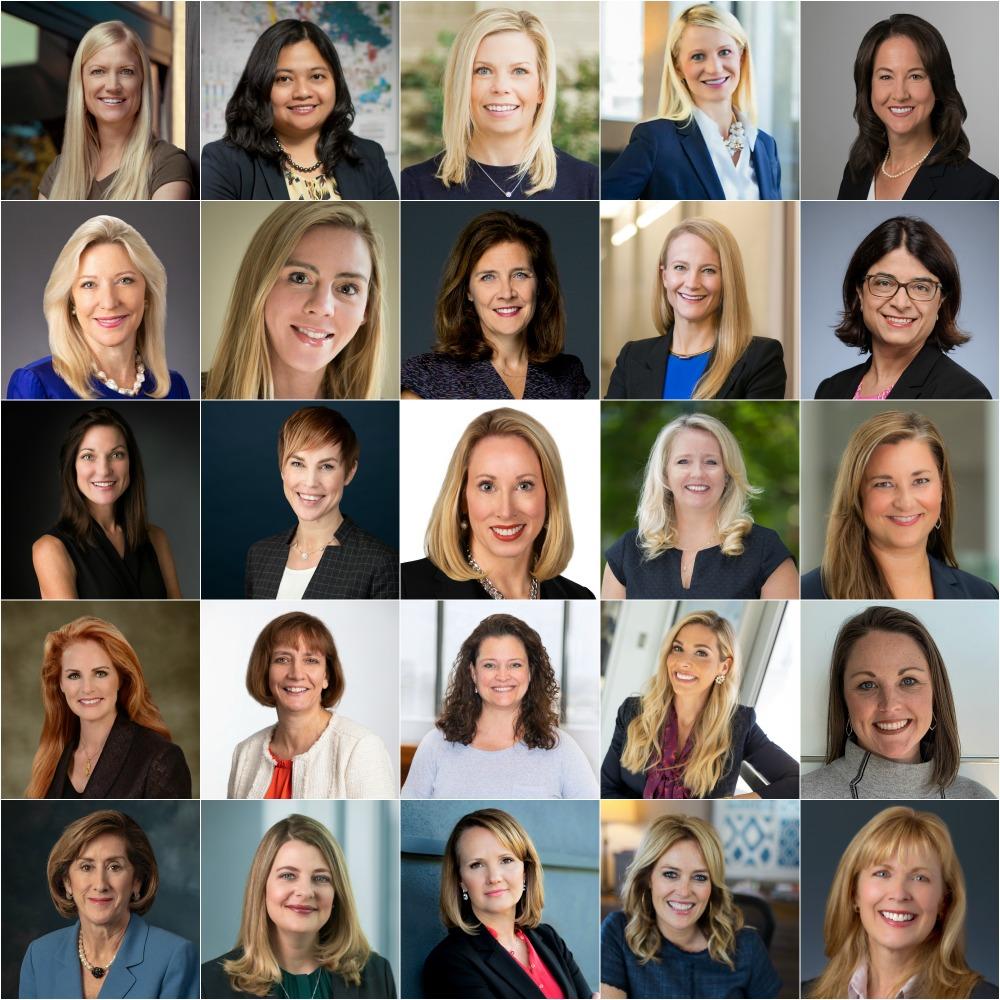 They serve as top-level executives such as CEO, COO and vice president. They are directors and partners. They’ve risen through the ranks, turning around struggling assets, helping to launch new companies and finding “sleeping elephants.”

Today, Hart Energy and Oil and Gas Investor will recognize the accomplishments of 25 Influential Women in Energy alongside this year’s Pinnacle Award recipient Dr. Sharon L. Wood, dean of the Cockrell School of Engineering at The University of Texas at Austin (UT-Austin). The award, sponsored by Schlumberger, recognizes her dedication to the advancement of architectural and environmental engineering.

As dean of one of the largest engineering schools in the U.S., with more than 8,000 students, Woods—a civil engineer—is the first woman to hold the title at UT-Austin. It is a position she’s held since 2013.

Attendees will also hear from retired U.S. Air Force Colonel Nicole Malachowski, a 21-year combat veteran and fighter squadron commander. Malachowski is also a first in history in 2005 when she became the first female pilot for the Thunderbirds, which carry out precise aerial maneuvers showcasing their skills and the operational performance of aircraft. In a video posted on her website, Malachowski recalled being “bristled” at the mention of her being the first female Thunderbird. She later realized, “It means something to see someone who looks like you succeed,” embracing being a role model for girls.

However, anyone—young, old, man or woman—could be motivated to shoot for your dreams using as inspiration the stories of Wood, Malachowski or one of this year’s 25 honorees. As reported by Hart Energy staff, the honorees shared their experiences, accomplishments, advice and motivators.

Tanya Andrien, COO, Enverus: After getting an MBA, Andrien had two routes from which to choose: education or energy, she said. She opted for energy but ended up with the “best of both worlds” teaching University of Texas in the McCombs energy center. Today, she’s influencing decision-makers as COO of one of the industry’s top data and software analytics firms.

Ami Arief, senior vice president, Tellurian Production LLC: Tellurian’s global scope is important to Arief because oil and gas’s capacity to transform “not just production or prices or access to energy, but the geopolitics of the world” motivates her.  “Clean air is a luxury, and what we are trying to do in the industry, like replacing coal with natural gas, is truly transformative.”

Andrejka Bernatova, investor and advisor, Energy Technology and Infrastructure: With a skillset of strategic and financial solutions for the energy industry, Bernatova wanted to have an even more meaningful impact in the industry. “I’m not naturally wired to be an advisor,” she says. “I’m very direct; I like to drive real efforts toward real results.”

Bonnie Black, vice president, drilling, Pioneer Natural Resources Co.: Black began working full time for Pioneer in 2007, overseeing health, safety and environment for its Alaska operations. She took to Pioneer’s philosophy of doing what’s right. “When challenged with, ‘what are we going to do?’ the answer is that we’re going to do the right thing,” she says. And after cleaning up after companies’ messes, she was now in a position to prevent mistakes.

Jaime Butler, vice president, Permian, Baker Hughes Co.: The energy transition underway and its future keeps Butler motivated about the oil and gas industry today. Meeting Baker Hughes’ goal to achieve net-zero CO2 equivalent emissions by 2050 “while also changing the mindset about our industry and reducing our carbon footprint is what motivates me.”

Stephanie Cox, CEO, Wood: Cox counts among her career milestones her first role managing manufacturing at Schlumberger. “My whole team probably had 15-plus more years’ seniority than I did,” she says. “They had never worked for a female before, and I had a lot of really significant responsibilities with that job.”

Kate Day, partner, Bracewell LLP: Day’s advice to other women getting into law firms is to “Show up, ask questions and work on every deal you can get your hands on, even ones where you don’t yet have the relevant expertise. There’s no way to become an expert without getting your hands dirty.”

Hinda Gharbi, executive vice president, reservoir and infrastructure, Schlumberger Ltd.: Gharbi believes it is a defining time for women in the oil and gas industry. She is impressed to see that women who are joining the industry possess a clarity of purpose, quest for learning and strong determination to progress.

Andrée Griffin, unconventional development manager, ExxonMobil Corp.: As a woman on the job, Griffin knew that her gender was a factor, but her approach was to establish the importance of every job whether held by her or her male colleagues. The more she maintained a level of respect, the more receptive the onsite team was to helping her get the job done.

Johanna Haggstrom, director of technology, Halliburton Co.: One of Haggstrom’s key priorities is being an advocate for diversity. “The future of this industry is still to be shaped,” she says. “Companies know they must focus on diversity and inclusion in order to move the industry into the future.”

Sam Holroyd, principal, Golden Advisory Services: One factor helping drive Sam’s career is a “passion” she has to be a communications catalyst. This has enabled her to bridge the gap that often exists between those assessing geotechnical and operational issues and those evaluating commercial factors and, in turn, developing an aligned valuation proposition for a specific asset.

Wendy King, vice president, Great Plains Business Unit, Lower 48, ConocoPhillips: Years learning the business, and her keen curiosity to understand geology, led to perhaps the pinnacle of her career so far. Last year, she was offered to lead the Great Plains unit, though her husband and son would have to remain in Australia.

Cathy Lebsack, vice president, land and exploration, new ventures, Devon Energy Corp.: Lebsack is a woman of faith and, while she describes herself as “incredibly competitive,” she wants her staff to feel her kindness and love and to succeed as a team. Young professionals, she advises, should be proactive.

Shauna Noonan, SPE president, director of artificial lift, Occidental: Noonan says she has no problem staying motivated in her career, even after reaching such heights. “There are [approximately] 840 million people on this planet that still do not have access to electricity,” she says. “Knowing that I work in an industry that contributes to reducing energy poverty and improving the standard of living for individuals in this world is such a motivation.”

Eileen Perillo, vice president finance, unconventionals, Shell USA Co.: Perillo’s advice to others, “I’ve told college students and young professionals that they have to find ways to work collaboratively in teams, because it’s challenging to do things by themselves,” she says. “But, equally, you need to figure out how to stand out as an individual.”

Tiffany Polak, development director, Marathon Oil Corp.: While delivering “optimum, capital efficient production” is Polak’s intent, she feels that teambuilding is a crucial piece of the puzzle. It doesn’t have to be expensive or elaborate, she explains. Knowing employees’ strengths and how to leverage individual talents makes a difference.

Heather Powell, president and CEO, Ventana E&P LLC: Powell believes one of her greatest career milestones is building Ventana E&P LLC from scratch. “Having a group of investors and board members that believe in me and our team enough to back us not once but twice is extremely humbling.”

Kristen Ray, vice president of technology of petroleum and legacy U.S. Assets, BHP: Ray says that, throughout her career, she’s had personal experiences of being selected and not being selected for roles due to gender. “These experiences have made me critically focus on the hiring process to ensure objective measures are put in place prior to interviews and as part of the selection criteria.”

Julie Robertson, chairman, CEO and president, Noble Corp.: Robertson urges industry rookies to spend the time to understand the business. Driving out to a rig, as she did, may no longer be feasible (Noble’s operations are in predominantly foreign offshore locations), but there is knowledge to be gained in an office tower, too.

Liz Schwarze, vice president, global exploration, Chevron Corp.: For Schwarze, success comes via a “strong combination of technical skills and soft skills” she believes all leaders must possess. Her leadership style is focused on data, strong relationships, and listening and asking rather than speaking and directing, she says. It’s also goal-oriented.

Kristin Thomas, senior vice president, public relations, Continental Resources Inc.: Thomas, the first woman to become a senior vice president at Continental, says women are increasingly being recognized in leadership roles for their contributions to the oil industry. “I do feel as a senior executive it’s my duty to remind women there is opportunity here,” says Thomas. “You’ve got to be tough if you want to do anything big, but we’re making a difference.”

Cindy Yeilding, senior vice president (incoming OTC chairwoman), BP America Inc.: Yeilding cites her time as the exploration team leader at the Thunder Horse discovery in 1999 as one of her career highlights. Twenty years later, Thunder Horse continues to be one of BP’s largest deepwater producing fields in its Gulf of Mexico portfolio.