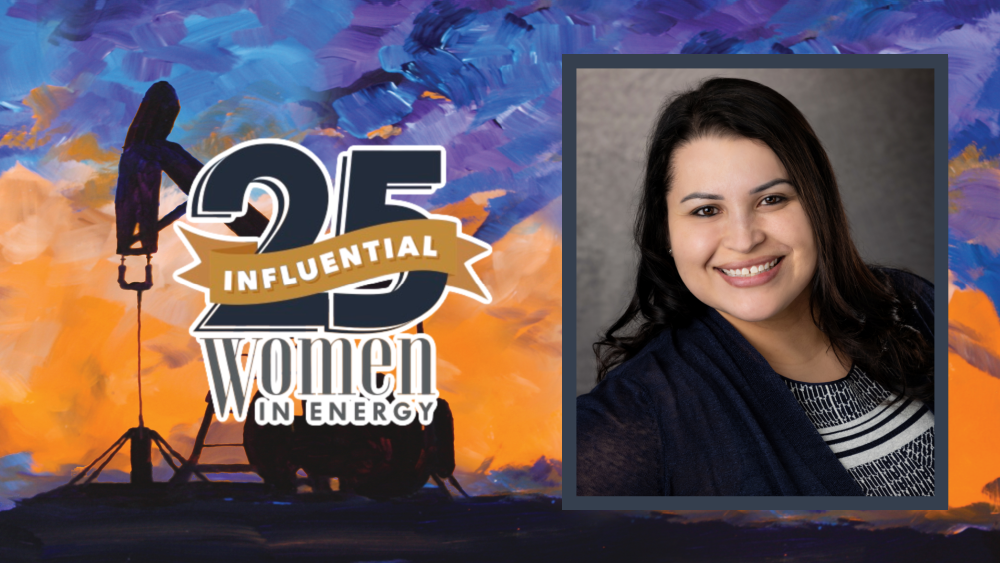 Bernadette Johnson was recently promoted from vice president of strategic analytics with Enverus to a new role focused on developing and growing the power part of the Enverus business as it keeps pace with the energy evolution underway.

“The intersection of markets is my expertise, and it’s now more important than ever that industry participants understand what the push toward more electrification means for traditional hydrocarbon markets,” Johnson said.

She added that oil and gas have done so much to improve quality of life and to support economic development.

“Energy is the world’s largest industry, and within that the oil and gas industry makes up more than half of global energy demand,” she said. “The oil and gas markets are dynamic and incredibly interesting. You have supply-and-demand fundamentals constantly being impacted by geopolitics, natural disasters, technological breakthroughs and more. There is never a dull day in this industry.”

Ready to jump in

Johnson said success in this industry comes from having the drive to always help out and adjust where needed. She advises young professionals to, “Always be willing to jump in and help, no matter the task and no matter your title or position within a company.”

She added, “Drive is one of those things you really can’t teach, and it’s one of the main things I look for in up-and-coming talent. It’s also always helpful to have exposure to different parts of a business, and you get that when you’re willing to help and do the less-desirable tasks.”

“I entered the industry following grad school. When I was nearing graduation and starting to interview for my first professional job, one of those interviews was with Bentek Energy. This was right when the shale revolution was first starting to take off. Bentek was hiring and growing quickly, and I was lucky to land my first job. I came into the industry at the perfect time. The market was changing rapidly. In my first months in the role, I was tasked with analyzing the Midcontinent and Northeast regions, and that summer we watched Henry Hub average $12-plus in June and then collapse to near $3 in August. I was hooked and fascinated with the industry. Looking back, it was an amazing time to come into the industry, and I’m so grateful for the initial opportunity at Bentek.”

“I was a founder at Ponderosa Advisors, a boutique advisory firm. When we sold our energy practice products and services to Enverus in 2016, I came over to Enverus along with my team. We then embarked on the integration of the production fore-casting software we developed at Ponderosa with the Enverus team. [That year] was also a tumultuous time in the industry because of the relatively recent crude price collapse and slow market recovery. Despite all the market turmoil, this was one of the most interesting times in my career. I learned what it meant to be part of a much larger company than I was used to, and I had a crash course in managing teams and efforts in a software product development team. The products and teams I managed enjoyed significant growth during this time because of the strengths of the combined teams.”
Career milestone

She points to the founding of Ponderosa Advisors in 2012 as a minority owner as one of her biggest milestones. She worked with Porter Bennett, majority owner and CEO, and Kelly Bennett minority partner and head of the water data/software business that has since been rebranded to B3Insight.

“We started this small boutique advisory business with only a handful of people, and I was lucky to learn from Porter, who is a well-known entrepreneur in energy,” she said. “I had a crash course in what it means to run part of a small business and be responsible for much more than just leading market analytics.”

“Porter Bennett and Jim Simpson are always the two people that come to mind when I’m asked this question. Porter was the founder and majority owner of Bentek Energy, and Jim Simpson was one of his partners. I look back and see how incredibly lucky I was to enter the industry at a time when everything was changing and to work for these two leaders.”

Draft law would require import pipelines to not be owned directly by suppliers.

Sinopec Prepares To Buy US LNG If Government Approves

With the U.S. and China close to a deal that would roll back tariffs, Sinopec prepares for an $18 billion deal with Cheniere.