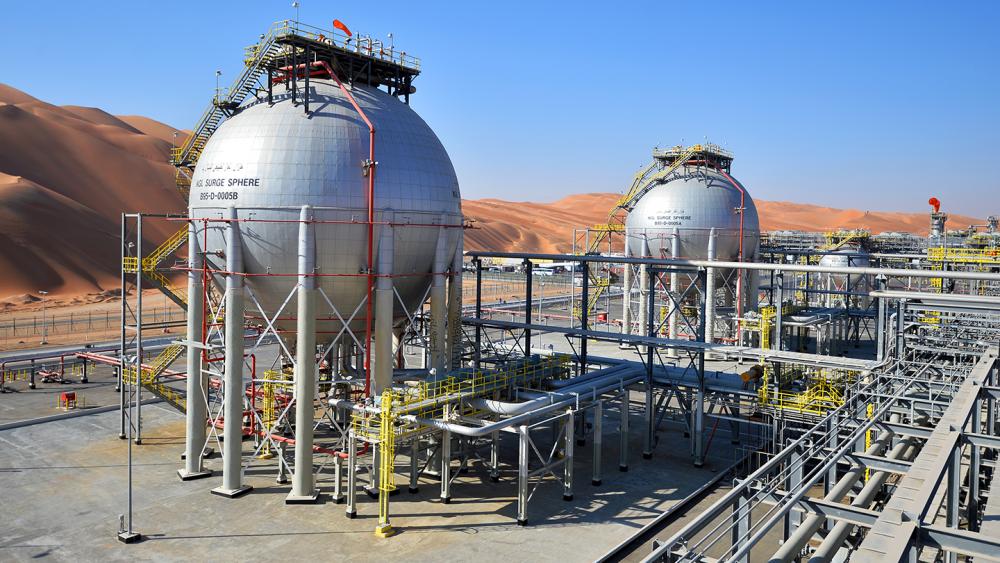 Saudi Aramco’s CCUS system in Shaybah captures large amounts of methane and reinjects it in the oil field for EOR. (Source: Saudi Aramco)

As the impacts of the coronavirus around the world and the resulting crash of oil markets continue dominating headlines, oil and gas companies seek ways to balance cost efficiencies with green measures while maintaining their social license to operate.

Before the spread of the pandemic, raging impli­cations of global warming being felt across the world were gripping the oil and gas industry with a sense of urgency to fight climate change, which is accountable for one-quarter of carbon emissions. The challenge, however, is more significant now due to increasing mar­ket uncertainty.

The International Energy Agency (IEA) has warned that the virus outbreak will likely undermine clean energy investment and is urging governments to offer economic stimulus packages that invest in clean energy technologies.

“We should not allow today’s crisis to compromise our efforts to tackle the world’s inescapable challenge,” Fatih Birol, executive director of the IEA, said in March 14 online commentary. “Large-scale investment to boost the development, deployment and integration of clean energy technologies, such as solar, wind, hydrogen, bat­teries and carbon capture, utilization and sequestration [CCUS], should be a central part of governments’ plans because it will bring the twin benefits of stimulating econ­omies and accelerating clean energy transitions.”

Although plunging crude prices have slowed investment in new projects across the world, carbon management experts agree that companies must not put CCUS efforts on the backburner.

“Sustaining investment in CCUS will reestablish soci­etal acceptance and build investor confidence,” Nigel Jenvey, head of global carbon management at Gaffney, Cline and Associates, told E&P. “I’m afraid the issues that oil and gas companies faced prior to the current market volatility will not be going away anytime soon. The social license for oil and gas has moved from local to global impacts—less about social acceptance for building and operating facilities and more about soci­ety’s willingness to invest and demand alternatives to fos­sil fuels due to the global impacts of climate change.”

The oil and gas industry is sometimes criticized for its low level of spending in carbon reduction relative to its total annual spend of about $500 billion per year in 2019, which is not a fair basis for comparison, according to Jenvey, because oil and gas companies have a respon­sibility to provide shareholder returns and products that the world demands.

“What is important is that actual CCUS spend and activity has been increasing dramatically in recent years following the Paris Agreement, setting an overall global policy frame­work of action, and broader support that CCUS is essential to addressing the dual challenge of providing affordable, reliable energy to meet the world’s growing demand while addressing the risks of climate change,” he said.

Jenvey explained that large-scale investments and solv­ing complex value-chains are a core capability of the oil and gas industry and a key challenge with CCUS projects, adding that both oil and gas and CCUS require integra­tion of various technical and commercial disciplines to execute successful projects. “Redevelopment of oil and gas fields and associated saline formations for CO2 stor­age can be a significant existing asset that is not currently fully valued. New business models and policies can pro­vide upside,” he said.

Jenvey believes the strategic value of large-scale deployment of CCUS to the oil and gas industry has not been widely communicated and understood. Gaffney, Cline and Associates evaluated data from a fifth assessment report of the U.N. Intergovernmental Panel on Climate Change by comparing energy use from oil and gas between those scenarios that deployed CCUS and those that had no CCUS deployment, while also meeting the global average tempera­ture limits that mitigate climate change.

“We found that through CCUS deploy­ment an additional 200 billion barrels of oil and about 1,300 trillion cubic feet of gas can be sustained through 2050. CCUS, therefore, can underpin the growth of gas and defer the decline of oil. CCUS also enables society to con­tinue using oil and gas at scale as an affordable and reliable energy source while also ensuring CO2 concentrations are limited to avoid the worse impacts of climate change,” Jenvey said.

He pointed out that there are other additional sources of strategic value for CCUS implementation, including continued resource development, use of existing infrastructure, creation of jobs, energy security and growth of GDP. “The oil and gas industry has learned a lot regarding CCUS over the years. Now is the time to embrace and deliver it,” he said.

Although capturing carbon has been used for decades to improve the qual­ity of natural gas, new CCUS solutions have emerged.

In the Middle East, Saudi Aramco has been investing heavily in CCUS technologies to address the global emissions challenge. The company is testing CCUS at a large gas plant in Saudi Arabia, which captures 800,000 tons of CO2 per year, compresses it and then injects it into underground reservoirs for EOR.

“Water has traditionally been used to extract oil, but it can produce only a certain fraction from the reservoir. CO2 is a good solvent for crude oil, and this method increases oil recovery but also prevents carbon from entering the atmosphere,” a spokesperson from Saudi Aramco explained.

The company also has innovated mobile carbon capture technologies and has recently demonstrated a heavy-duty truck that captures 45% of the CO2 emissions from its exhaust and stores it on board the vehicle.

Saudi Aramco also has invested in a CO2 conversion technology that uses captured CO2 to create useful poly­mers, such as plastics, with just one-third of the carbon footprint of conventional polymers.

“By fully leveraging the potential of CCUS technology, we can create a circular system in which carbon is no lon­ger seen as a waste product but rather as an important feedstock and energy carrier, and an indispensable com­ponent of a sustainable future,” said Bashir M. Dabbousi, director of the technology, strategy and planning depart­ment of Saudi Aramco. “40% to 50% more investments are needed in CCUS to reach the impact the world needs.”

Aramco researchers in cooperation with the Korea Advanced Institute of Technology in South Korea recently announced a breakthrough in their scientific research on carbon capture. They developed a catalyst formulation that makes the dry-reforming of CO2 and hydrocarbons potentially viable for the pro­duction of olefins and a variety of useful products. With these efforts, the company expects to further increase the potential of reusing and recycling captured carbon.

Even as the low-price environment raises questions about the oil and gas industry’s future of clean energy deployment, the Oil and Gas Climate Initiative (OGCI) has confirmed its commitment toward practical action on climate change.

“Despite these challenging market conditions, OGCI and its members remain fully committed to our targets and ambitions and leading the industry’s response to climate change in support of the ambitions of the Paris Agreement,” Julien Perez, vice president of strategy and policy at OGCI said. “These global crises remind us how acting collectively is vital and how important our actions could be to overcome them. The oil and gas industry has the collective expertise, resources and motivation to play a leading role in making CCUS happen.”

OGCI is focusing its significant collaborative efforts into injecting momentum into a global CCUS indus­try. In September 2019, OGCI launched its CCUS KickStarter program, which is an initiative designed to facilitate large-scale commercial investment in CCUS by enabling multiple low-carbon industrial hubs. The ultimate aim of the KickStarter program is to create the necessary conditions to facilitate a commercially viable, safe and environmentally responsible CCUS industry.

“We decided to start by prioritizing five emerging CCUS hubs—in the U.K., Norway, Netherlands, China and U.S.—where we can build on existing work and scale toward our ambition of doubling the amount of CO2 that is currently stored globally. The teams of OGCI member companies that are working on these hubs are already collaborating with governments and industry to scale up future storage potential and create new hubs,” Perez said.

Perez discussed OGCI’s investment in new technolo­gies to reduce the cost of carbon capture and enhance the value of the captured CO2 to facilitate the growth of CCUS markets.

“OGCI Climate Investments has invested in Svante, a modular, scalable capture technology that can significantly reduce the cost of capture. On the value side, it has an investment in two technologies that use CO2 to make prod­ucts—Solidia can reduce the carbon footprint of cement and concrete by up to 70% and water by 80%, while Econic uses catalyst technology to incorporate CO2 as a raw mate­rial into polyols, the basis of all polyurethanes,” he said.

In February of this year, the OGCI announced the formation of a consortium of OGCI members to accel­erate the development of the Net Zero Teesside proj­ect—a CCUS project based in Teesside in the northeast of England. The consortium includes oil majors Eni, Equinor, Shell and Total, with BP acting as operator. Pre­viously known as the Clean Gas Project, the venture aims to build a transportation and storage system to gather industrial CO2, compress it and store it in a reservoir under the North Sea. Additionally, a combined cycle gas turbine facility with carbon capture technology will pro­vide low-carbon power complementing renewable energy sources and reinforcing investment in the infrastructure.

In the long term, the OGCI and its member compa­nies are engaged in a number of collective and individ­ual actions to support the transition toward a net-zero economy. The OGCI aims to reduce the collective aver­age methane intensity of aggregated upstream gas and oil operations to below 0.25% by 2025.

“The target is a collective effort that OGCI’s members are taking as an industry,” Perez said. “We believe the effects will be deeper and faster than any individual entity could achieve.”