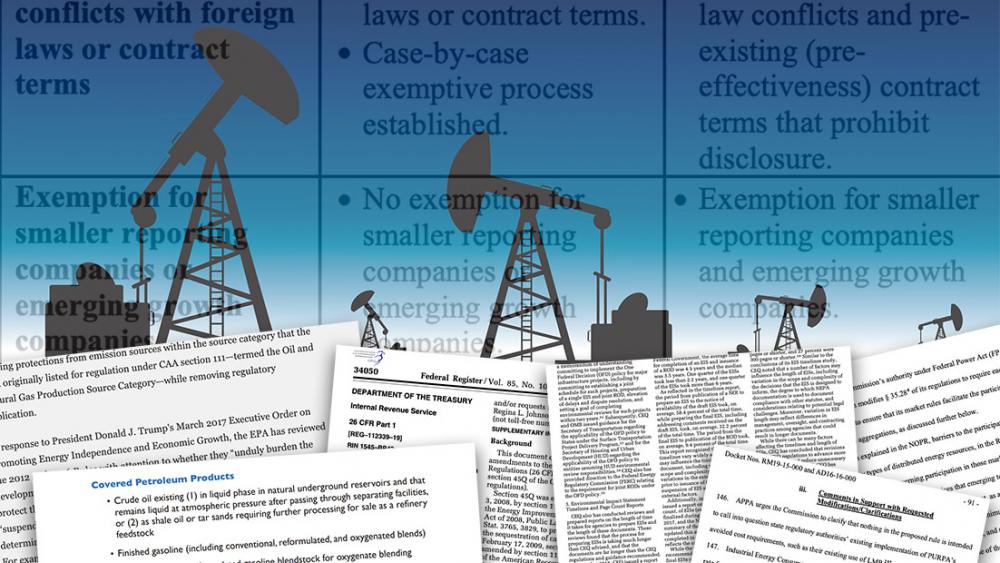 In 2020, the Trump administration exercised significant influence over the oil and gas industry, most notably by way of relevant federal regulatory agencies. These include the Environmental Protection Agency (EPA), Committee on Foreign Investment in the United States (CFIUS), Department of Energy (DOE), Federal Energy Regulatory Commission (FERC), Internal Revenue Service (IRS), Department of Justice (DOJ) and Federal Trade Commission (FTC), among others.

Despite the pandemic and major distractions such as the election, these agencies were active throughout 2020, each advancing their respective agendas and that of the Trump administration in meaningful ways. Indeed, the final quarter of 2020 saw significant regulatory activity as federal agencies sought to complete pending rulemakings and prevent priority rules from potentially becoming subject to a regulatory freeze under the Biden Administration by ensuring that they become effective prior to Inauguration Day on Jan. 20.

This article details the major petroleum-relevant agency actions in 2020.  Each section provides a brief overview of the relevant agency and also provides, where possible, an indication of which actions are most susceptible to reversal or amendment under the incoming Biden Administration.

CFIUS is an interagency group tasked with reviewing certain foreign investments in the United States, specifically to determine whether such investments are a threat to national security.  CFIUS is chaired by the Secretary of the Treasury, with members from the Departments of Homeland Security, Commerce, State, Energy, Defense, and Justice as well as the Office of the U.S. Trade Representative and the Office of Science & Technology Policy. Despite the pandemic, 2020 was a very active year for CFIUS.

DOE is a cabinet-level department created to oversee the nation's nuclear weapons program, naval reactor production, other energy-related supervision, and domestic energy production.  in 2020, DOE took actions that indicate an increased commitment to the advancement and protection of U.S. critical energy infrastructure.  The agency has also been active in its approval of energy related projects, specifically in the LNG sector.

FERC is an independent agency comprising up to five commissioners appointed by the president with the advice and consent of the Senate. FERC’s authority includes, among other things, regulation of the interstate transmission of electricity, natural gas and oil and the review of proposals to construct LNG terminals.

PHMSA, which is part of the Department of Transportation, is responsible for regulating for the safe and secure movement of hazardous materials by all modes of transportation, including pipelines. PHMSA’s Office of Pipeline Safety regulates the design, construction, operation, maintenance and spill response planning for natural gas and hazardous liquid (including oil) transportation pipelines.

EPA’s mission is to protect human health and the environment, which includes the goal of ensuring Americans have clean air, land and water. The agency’s primary tool in accomplishing this goal is the development and enforcement of regulations implementing federal environmental laws. 2020 witnessed numerous regulatory actions from EPA with potential impacts for the oil and gas sector, as the agency sought to advance the regulatory reform priorities established by the Trump administration. This summary contains brief updates on some of these key environmental developments, the majority of which represented de-regulatory efforts. While many of these actions may be the target of rollbacks under a Biden administration, the summary highlights actions that may receive priority focus in light of the president-elect’s platform.

The Corps’ mission is to “deliver vital public and military engineering services; partnering in peace and war to strengthen our nation’s security, energize the economy and reduce risks from disasters.” This includes oversight of some energy projects.

CEQ coordinates Federal environmental efforts. The entity works closely with other offices in the development of environmental policies and initiatives. CEQ was established within the Executive Office of the President by Congress as part of the National Environmental Policy Act of 1969 (NEPA).

Created after the stock market crash of 1929, the SEC is an independent agency with a three-part mission: to protect investors; maintain fair, orderly and efficient markets; and facilitate capital formation. To that end, the SEC enforces statutory requirements regarding public disclosures by corporations, specifically, requirements that public companies and other regulated entities submit quarterly and annual reports, along with other disclosures.

The IRS is a bureau of the Department of the Treasury and is responsible for the administration and enforcement the United States internal revenue laws. In 2020, the IRS issued several key pieces of guidance relevant for energy companies, primarily to implement existing laws and provide taxpayers with needed certainty regarding the application of such laws.

The DOJ and FTC enforce the nation’s antitrust laws, among others, and each is responsible for particular portions of the oil and gas industry. The DOJ typically reviews upstream transactions involving oil field services companies while the FTC reviews mid- and downstream transactions. Despite disruptions of the pandemic, the agencies brought numerous relevant enforcement actions, the most prominent of which are detailed below.

Jeffrey Oliver is a partner in Baker Botts’ Antitrust and Competition Practice, and Thomas Holmberg is a partner in the Global Projects Group at Baker Botts and firmwide co-chair of the LNG Practice Group. Allison Watkins Mallick, Jared Meier, Joyce Adetutu and Kimberly White of Baker Botts also contributed to this article.

2022-03-22 - The changes come “in line with the significant growth in global trade, the improvement of ships’ economics, the Suez Canal waterway development and the enhancement of the transit service.”

2022-03-23 - Most of the oil in the Caspian Pipeline Consortium belongs to Russia, Kazakhstan and international oil majors such as Chevron Corp.

2022-03-23 - Worldwide demand for crude oil was also visible in U.S. exports of crude, which rose to their highest since July 2021, and as refinery utilization rose on the U.S. Gulf Coast hub to its highest level since January 2020.