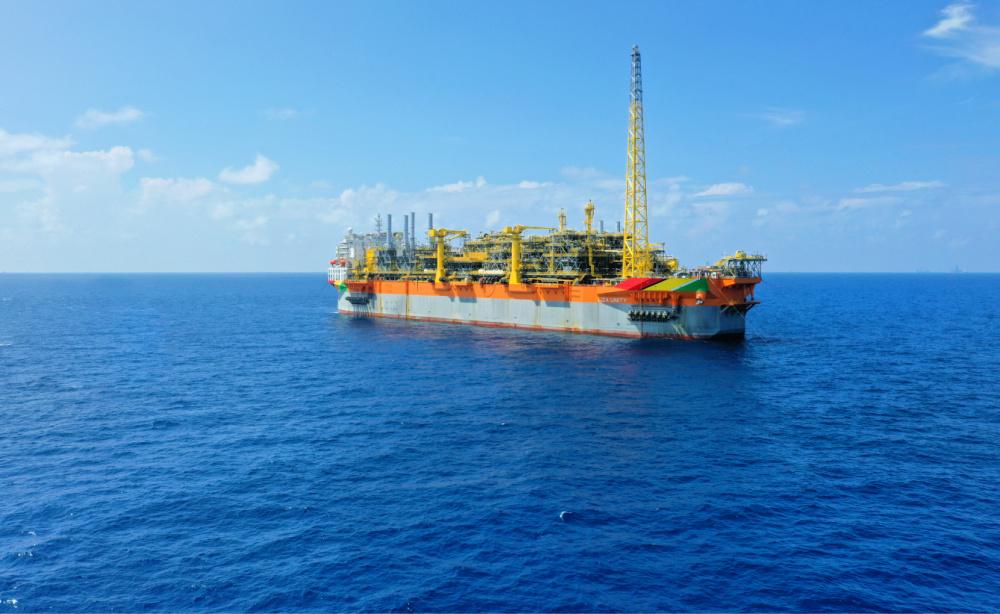 Pictured is Liza Destiny, the first FPSO Exxon Mobil and its partners have ordered from SBM Offshore for developments in the prolific deepwater Stabroek block offshore Guyana. (Source: SBM Offshore)

One Guyana is the fourth FPSO Exxon Mobil and its partners have ordered from SBM Offshore for developments in the prolific deepwater Stabroek block. The design for the FPSO One Guyana is based on SBM Offshore’s Fast4Ward program, which incorporates the company’s newbuild, multipurpose hull combined with standardized topsides modules.

The project financing for One Guyana was secured through a consortium of 15 international banks, according to a company release on July 21.

SBM Offshore said in the release that it expects to draw the loan in full, phased over the construction period of the FPSO, and that the financing will become non-recourse once the FPSO is completed and the pre-completion guarantee has been released. The project loan carries a variable interest rate based on SOFR plus 2.2% margin.

The FPSO One Guyana will develop an estimated resource base of approximately 925 million barrels of oil, according to Hess Corp., a partner on the project.

One Guyana will be designed to produce 250,000 b/d of oil, treat 450 MMcf/d of associated gas and inject 300,000 bbl/d of water. The FPSO will be spread moored in water depth of about 1,800 m and will be able to store around 2 million barrels of crude oil when it begins production in 2025.

The $10 billion project will include six drill centers with up to 26 production wells and 25 injection wells.

Under the contract Exxon Mobil awarded in April, SBM will construct, install and then lease and operate the One Guyana FPSO for up to two years, after which the FPSO ownership and operation will transfer to Exxon Mobil. The turnkey phase of the project will be executed by a special purpose company established by SBM Offshore (70%) and McDermott (30%).

Exxon Mobil and its partners expect to install at least six FPSOs to produce over 1 million bbl/d from the Stabroek block by 2027 and foresee the potential for up to 10 total FPSOs for the 6.6 million-acre block.

In March, the topsides modules were lifted onto the third unit, the FPSO Prosperity, which will serve the Payara Field. The Prosperity will also have production capacity of about 220,000 bbl/d and is slated to go onstream in 2024.