Russia widened its gas cuts to Europe on May 31 with energy giant Gazprom turning off supplies to top Dutch trader GasTerra escalating the economic battle between Moscow and Brussels.

The move comes a day after Denmark flagged a potential end to its Russian gas supply and the EU’s toughest measure yet against Russia for its invasion of Ukraine, an agreement to halt sea-borne imports of its oil.

GasTerra, which buys and trades gas on behalf of the Dutch government, said it had contracted elsewhere for the 2 Bcm of gas it had expected to receive from Gazprom through October.

“This is not yet seen as a threat to supplies,” said Economy Affairs Ministry spokesperson Pieter ten Bruggencate.

Danish firm Orsted on May 30 warned that Gazprom Export could also halt its supply but it too said such a move would not immediately put Denmark’s gas supplies at risk.

Moscow had already stopped natural gas supplies to Bulgaria, Poland and Finland citing their refusal to pay in Russian rubles, a demand made in response to Western sanctions that have isolated Russia including cutting it off from the SWIFT international bank messaging system.

The gas supply cuts have boosted already high gas prices, turbocharging inflation and spurring European governments and companies to chase alternative supply and the infrastructure to handle it, including floating storage and regasification units (FSRUs).

On Monday European Union leaders agreed in principle to cut the EU’s Russian oil imports by 90% by year-end, stepping up pressure on Russia over its invasion of Ukraine, which Moscow refers to a “special military operation.”

2022-07-22 - According to data from Wood Mackenzie, the reduced flow rates from TC Energy's Keystone pipeline, first reported on July 17, were having little impact on oil deliveries.

2022-10-04 - The fire was allowed to safely burn out and no injuries were reported, the Jacksonville-Morgan County Office of Emergency Management agency said. 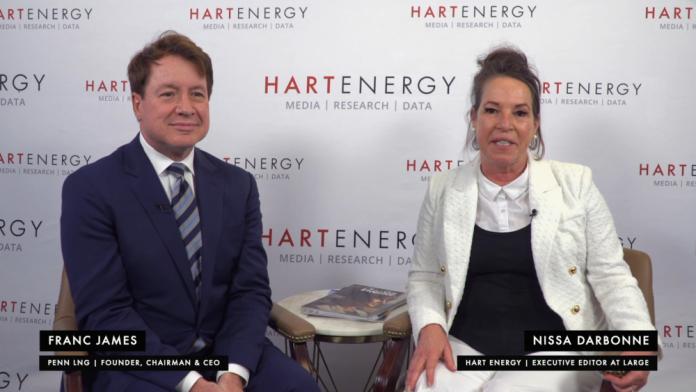 2022-08-22 - Penn LNG CEO Franc James shares more on his company’s plans to develop the first newbuild LNG export facility on the Atlantic Coast this century in this Hart Energy Exclusive.