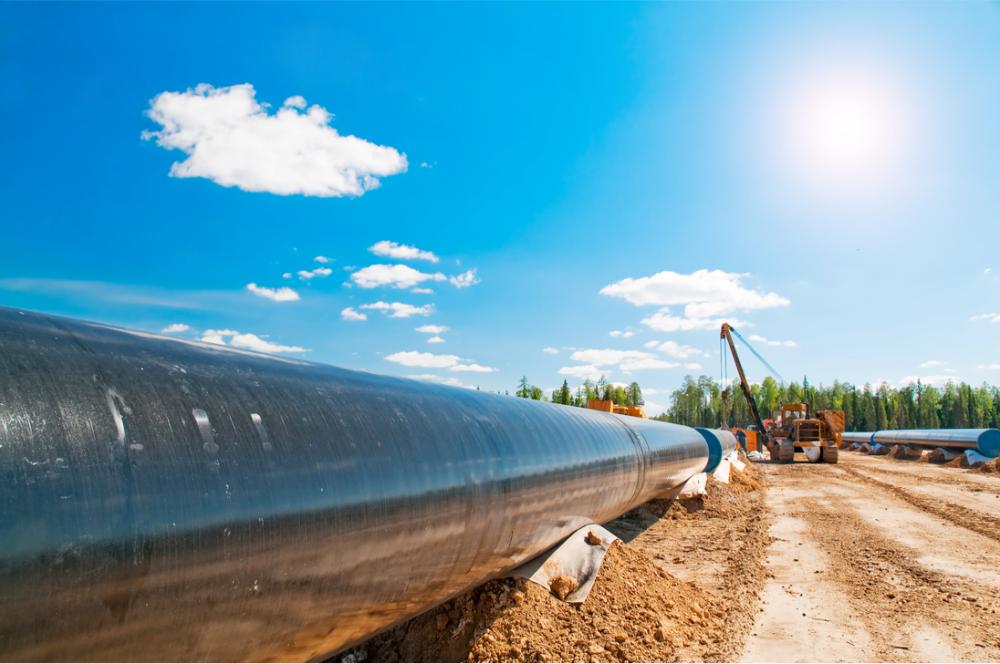 Both the output from the big plays and the number of pipelines taking it away are increasing. The next step is what a slew of recent projects are intended to do: get hydrocarbons to demand centers—in both the gas-hungry U.S. Northeast and growing markets overseas.

We’ll start with a big number: 1 million barrels per day (MMbbl/d). At the close of January, Exxon Mobil Corp., Plains All American Pipeline LP and Lotus Midstream LLC announced they will build a pipeline that will have that capacity to move oil and condensates from Wink, Texas, in the Permian to Webster on the Texas Gulf Coast.

Plains will handle construction, which is expected to start operations in the first half of 2021.

On the natural gas side, EagleClaw Midstream announced a final investment decision to move forward on its Delaware Link Pipeline, which will have capacity to move 1.2 billion cubic feet per day (Bcf/d) from its processing plants in Reeves County, Texas, in the Delaware Basin to the Permian’s Waha Hub. EagleClaw indicated that it might, depending on producer interest, increase the 30-inch pipe’s size and capacity.

It seems Cheniere Energy Partners LP’s Sabine Pass plant in Cameron Parish, La., is too new to be the grizzled veteran of Gulf Coast LNG-export projects. But, even as a new wave of terminals prepares to ship natural gas, the Sabine plant’s capacity is still growing.

On March 7, the company announced substantial completion of Train 5, meaning commissioning was completed for the 4.5-million-ton-per-year facility; commercial delivery is set for August.

But on that very day, whippersnapper Rio Grande LNG LLC, a unit of NextDecade Corp., closed a 30-year lease agreement with the Brownsville (Texas) Navigation Board for a 984-acre parcel that will be home to a large-scale LNG-export terminal.

The facility, along with the associated Rio Bravo Pipeline, could ultimately pump more than $15 billion into Cameron County, Texas.

Not all projects are centered about burgeoning gas production. Sentinel Midstream’s Texas GulfLink project near Freeport, Texas, is all about loading VLCCs (Very Large Crude Carriers) full of oil to foreign markets.

The planned facility will boast an onshore terminal with as much as 18 million barrels of storage, an offshore 42-inch pipeline and a manned offshore platform. The expectation is to provide capacity that will average export loading of 1.2 MMbbl/d per calendar year.

“Texas GulfLink will provide the United States with an economical solution to clear the over-supply barrels destined for the Gulf Coast,” said Sentinel Midstream president and CEO Jeff Ballard.

Also in the first quarter, Navigator Energy Services LLC announced it would significantly expand its Glass Mountain Pipeline System as it began initial construction of its 20-inch Cushing Express Pipeline.

The expansion involves five new origination points in Canadian, Kingfisher and Grady counties, Okla., extending service into the Stack, Woodford/Cana, Merge and Scoop plays. The project will add about 750,000 barrels of storage capacity and long-term agreements with operators that represent 50,000 bbl/d of existing production and almost 600,000 operated acres.

Cushing Express is designed to transported segregated crudes from the field to destinations at the Cushing, Okla., trading hub. That will add an initial 250,000 bbl/d of incremental deliverability.

The Williams Cos.’ binding open season for the Regional Energy Access expansion of its Transco Pipeline ended in April. The pipe, yet to be approved by regulators, will bring about 1 Bcf/d from the Marcellus Shale to northeastern U.S. delivery points in Pennsylvania and New Jersey.

Regional Energy Access involves what the company expects will be 34 miles of selected pipeline loop segments and additional compression along the existing Transco corridor. The project has an in-service target date of November 2022.

The partial in-service of the $600-million Gulf Xpress puts four new compressor stations in Kentucky, Tennessee and Mississippi into operation. Those facilities represent 60% of the project’s total capacity. 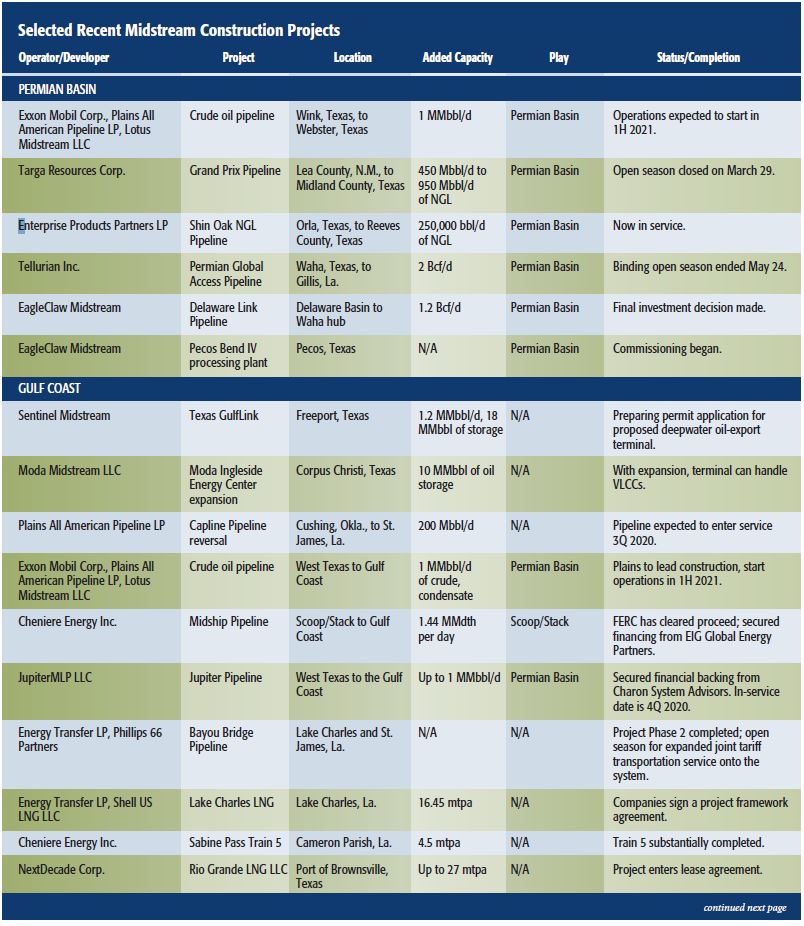 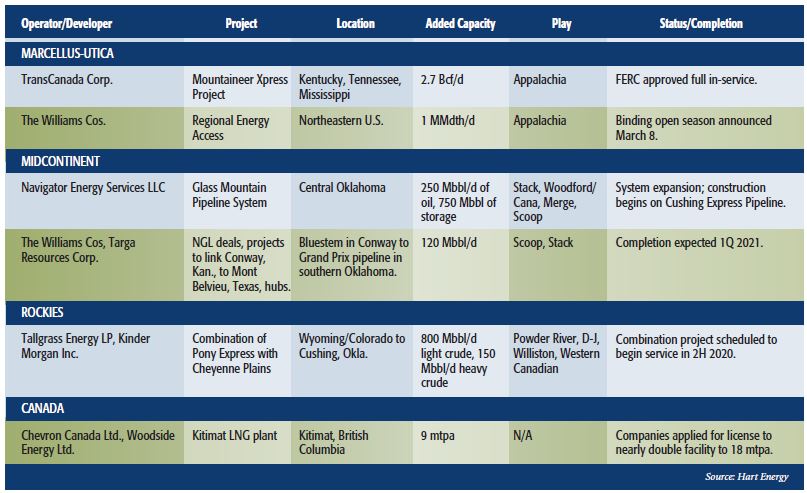 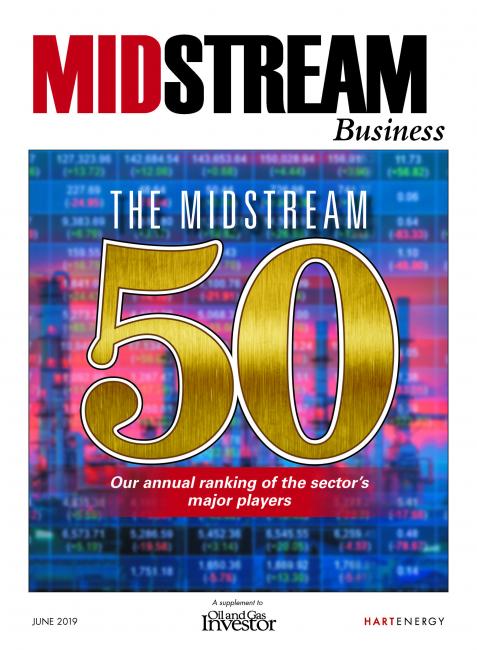