Equipped with more than a decade of experience and a broad array of cutting-edge tools and technologies, shale operators are expanding their horizons to consider new ways of boosting field economics. Refracturing wells to re-establish reservoir connectivity and restore productivity is showing promise in unconventional plays as a cost-effective alternative to drilling and completing new wells.

Applied to vertical wells since the 1950s, refracturing involves restimulating a previously stimulated zone. The first horizontal shale well refracturing began in 2003 in the unconventional Bakken play on openhole and slotted liner completions. Refracturing of multistage mechanically isolated fractures was introduced in the Barnett Shale around 2007. However, these efforts delivered inconsistent financial results.

Enhanced understanding of fracture geometry and behavior launched a new era for refracturing from 2013 to 2014 with the development of better data collection; surveillance capabilities; and sophisticated treatment designs, including biodegradable chemical diverters to improve connectivity. By this time operators also had learned that selecting the most promising refracturing candidates is critical to both economic and technological success.

In a strategic collaboration with Sundance Energy, Schlumberger designed a strategy to refracture a series of wells in the Eagle Ford to increase production and, in some cases, prevent damaging hydraulic fractures on offset wells. With a goal to economically increase EUR, Sundance Energy worked toward developing an effective refracturing strategy encompassing proper candidate selection and appropriate treatment design with surveillance.

A “good” well is not necessarily a good refracturing candidate because it might not deliver enough daily incremental production. A more promising candidate is one that has shown strong potential reservoir quality but had a production drop-off. Wells previously completed with poor designs, leaving portions of the reservoir untapped, and wells that experienced mechanical issues also may be promising candidates.

Reservoir engineering, production forecasting, completion design and feasibility, and economic analysis further enhance understanding before any well is refractured. Because refracturing candidates often have produced for years and may have sand, scale and other debris in the lateral, a wellbore cleanout is recommended when the stimulation treatment is initiated.

Rigorous candidate selection was the foundation of Sundance Energy’s campaign to launch a refracturing program in the Eagle Ford in October 2016. The methodology included selecting and ranking potential candidates, then determining which of those would deliver the best economic results once refractured. Thirteen wells were ranked as excellent, good and fair candidates based on best and current production rates, original fracture treatment size, perforation strategy, lateral length and age of the well. Five wells, two excellent and three good candidates, all located in McMullen County, were ultimately selected.

All five wells had received smaller original fracturing treatments than more recent offsets in terms of job size and had wide variations in lateral spacing, with distance to offset wells ranging from 106 m to 381 m (350 ft to 1,250 ft). To reduce the risk of hydraulic communication between treatment and offset wells, only candidates with a minimum distance of 198 m (650 ft) to the nearest offset well was considered.

The wells were treated with 20/40 mesh proppant for all stages with maximum concentrations of 5 lb/gal in a continuous sequence, with intermediate diversion and pad stages between the proppant ramps. Treatment volumes varied based on lateral lengths, but at least 1,000 lb of proppant was pumped per lateral foot using low guar-loading crosslinked gel during proppant stages.

Before pumping the proppant Schlumberger applied an engineered fracture stimulation additive at the early part of each fracturing stage to constrain fracture growth with far-field diversion and ultimately improve reservoir drainage by focusing the hydraulic fracture near the treatment well. Designed to minimize communication with neighboring wells or fracturing into undesirable zones, the BroadBand Shield fracture geometry control service was delivered with a composite fluid system to transport the blend of multimodal particles that bridge at the fracture tip to prevent excessive fracture height and length growth. This prevents offset and treatment wells from draining the same rock. The diverter particles are designed to create a low-permeability barrier at the fracture boundary.

To measure the effectiveness of the fracture geometry control service, a high-frequency pressure-monitoring technique was implemented to monitor pressure in the treatment and offset wells. This would allow quick adjustment of the diversion design in the event of a “frack hit” or pressure spike on the offset well while fracturing. No offset well fracture hits were recorded during the refracture treatments. However, a pressure spike was detected on refractured and shut-in Well A while treating two new wells on a nearby zipper pad that did not contain fracture geometry control material.

For near-wellbore diversion Schlumberger administered the Broadband Sequence fracturing service, a technique that uses composite pills of dissolvable sphere-shaped particles pumped with degradable fibers to plug perforation clusters and near-wellbore fractures. This induces temporary isolation and stimulates more perforations. The fibers help transport the multimodal spheres as they travel downhole and along the lateral and enhance the plugging effect by minimizing leak-off through the pill. 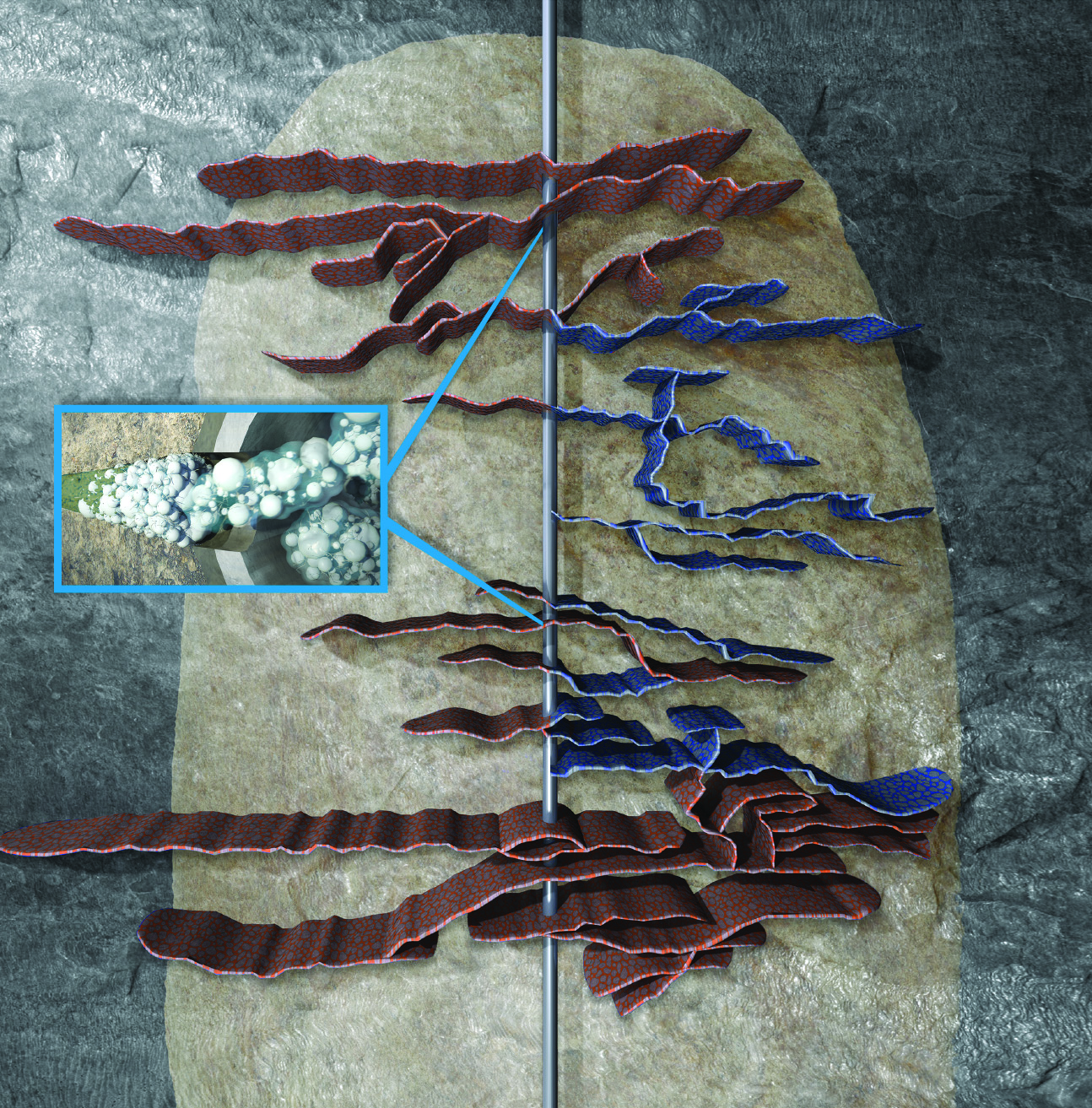 The effectiveness of the diversion treatments was measured by instantaneous shut-in pressure (ISIP), a realtime evaluation technique that also can guide operators in making necessary adjustments during treatment. Refracturing ISIPs on four of the five wells were within the virgin treatment ISIP range set when the wells were initially fractured. Well E, which had historically been the best producer of the five, delivered the lowest incremental production and was the only well that did not reach the original ISIP target range. Wells A, C and D had the greatest incremental oil production.

The project confirmed that a multiwell refracturing campaign can be economically viable with proper candidate selection, treatment design and execution. Incremental production was achieved in all five wells, which have been producing for roughly six months after being refractured. IP results post-refracturing treatments show the wells are producing up to 200 bbl/d, exceeding the base forecast. A decrease in the gas-oil ratio indicates the refractures likely stimulated and contacted new reservoir rock and added incremental reserves.

Initial 30-day average incremental production is about 65 bbl/d with more than 100% uplift in production compared to prerefracturing rates. Estimated average EUR increased by more than 60,000 bbl, a 45% increase over the predicted base EUR. Based on these results, Sundance Energy has identified 35 additional economically viable refracturing candidates in the Eagle Ford. 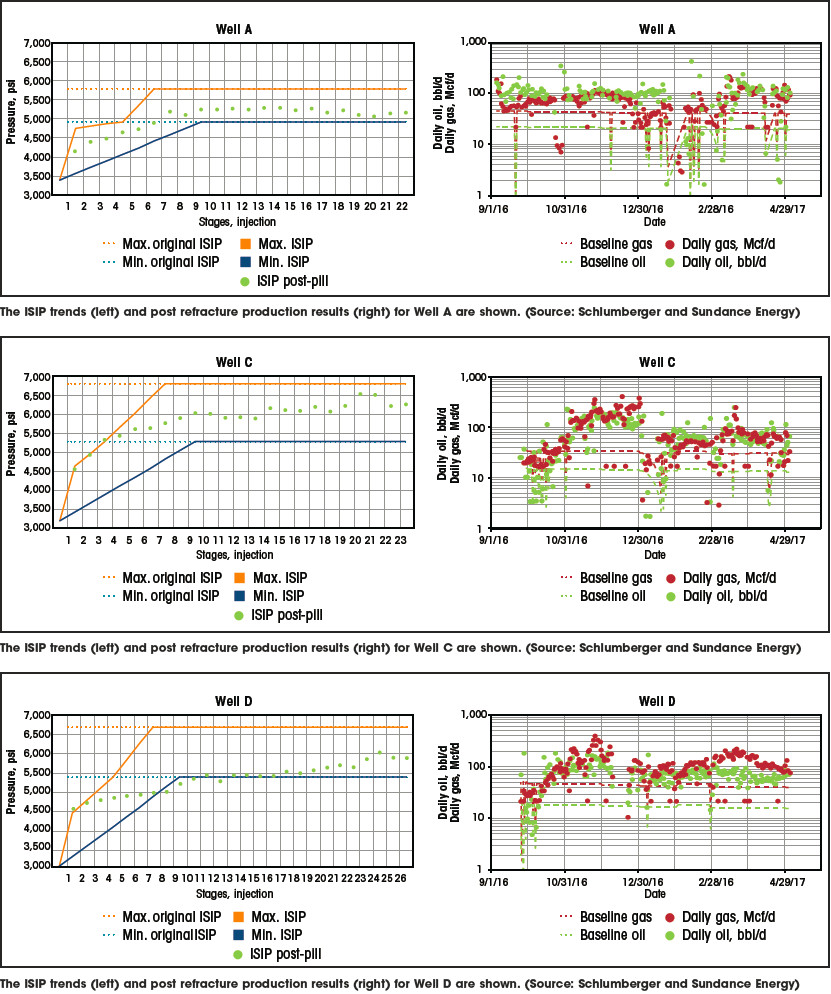