In 2013, Mexico’s government launched a sweeping overhaul of the country’s energy sector, opening it up to foreign direct investment. The liberalization effort, while still in its early stages, stands to fundamentally reshape Mexico’s energy markets.

The opportunities for energy companies and those in related industries, both Mexican and international, in this rapidly evolving environment are sizable. We see some particularly attractive—and immediate—opportunities in the fuels market, both in the provision of infrastructure and in retail and wholesale fuel sales and supply.

Mexico’s fuel transportation pipelines and fuel storage capacity are in vast need of upgrade and expansion. About half of the country’s pipelines are saturated, creating bottlenecks; the situation is particularly critical in the central and central-west regions.

As a result, fuel transportation is increasingly undertaken via rail and trucks. Together, they serve about 15% of total demand. But the financial impact of transporting fuel through a means other than pipelines is substantial. Transportation costs for 1,000 tons of fuel are $6 per kilometer (km) for pipelines vs. $12/km, $37/km and $83/km, respectively, for sea, rail and trucks.

Use of rail and trucks is driven by two additional factors. One is the fact that some storage facilities are not connected to pipelines or located in ports.

The other is theft. According to Pemex, the national oil company, the number of identified illegal taps of pipelines has grown strongly in recent years, climbing from roughly 710 in 2010 to about 6,260 in 2016. This theft boosts service interruptions and increases the appeal of transportation by rail and road—despite the higher cost—because of the safety and certainty they provide.

In the wake of reform, the private sector has begun to invest in pipeline infrastructure. To date, commitments to build four pipelines in the central, central-west and northeast regions, representing more than $2 billion in investment, have been announced. The largest is the planned $800 million investment by Sierra Oil & Gas, TransCanada and Grupo TMM to build infrastructure in Tuxpan, Veracruz.

All four pipelines are expected to come online in 2018.

The addition of these pipelines should mitigate existing capacity constraints, particularly in the central and central-west regions. In fact, it could create excess capacity there. The accompanying chart provides estimates of regional impacts.

But most regions will likely continue wrestling with a shortage of pipeline capacity for at least the next few years because of rising fuel demand. The energy ministry has predicted that Mexico’s consumption of transport fuel will grow by roughly 3% annually to 2029.

Given early indications of relatively high tariff rates on pipeline usage, this imbalance between need and supply could create attractive opportunities for investors, though they will need to pay close attention to changes in the rates and other critical variables as deregulation continues. Undoubtedly, there will be opportunities in the country’s central region, where demand for pipeline capacity is greatest.

But opportunities will emerge in other regions as well. 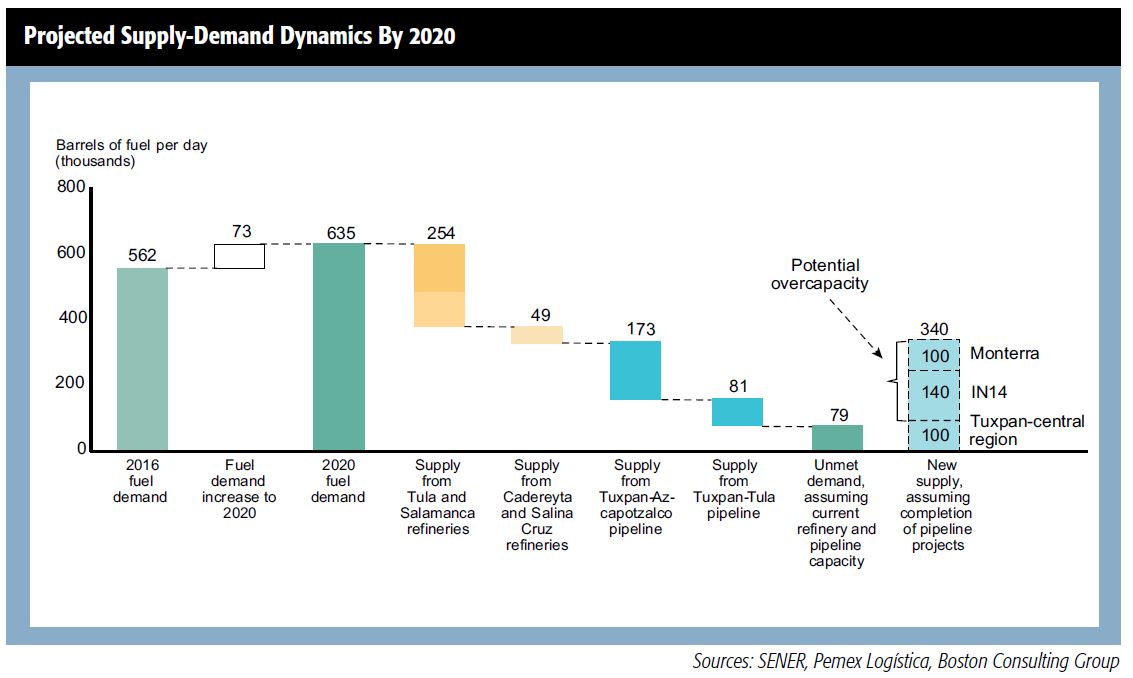 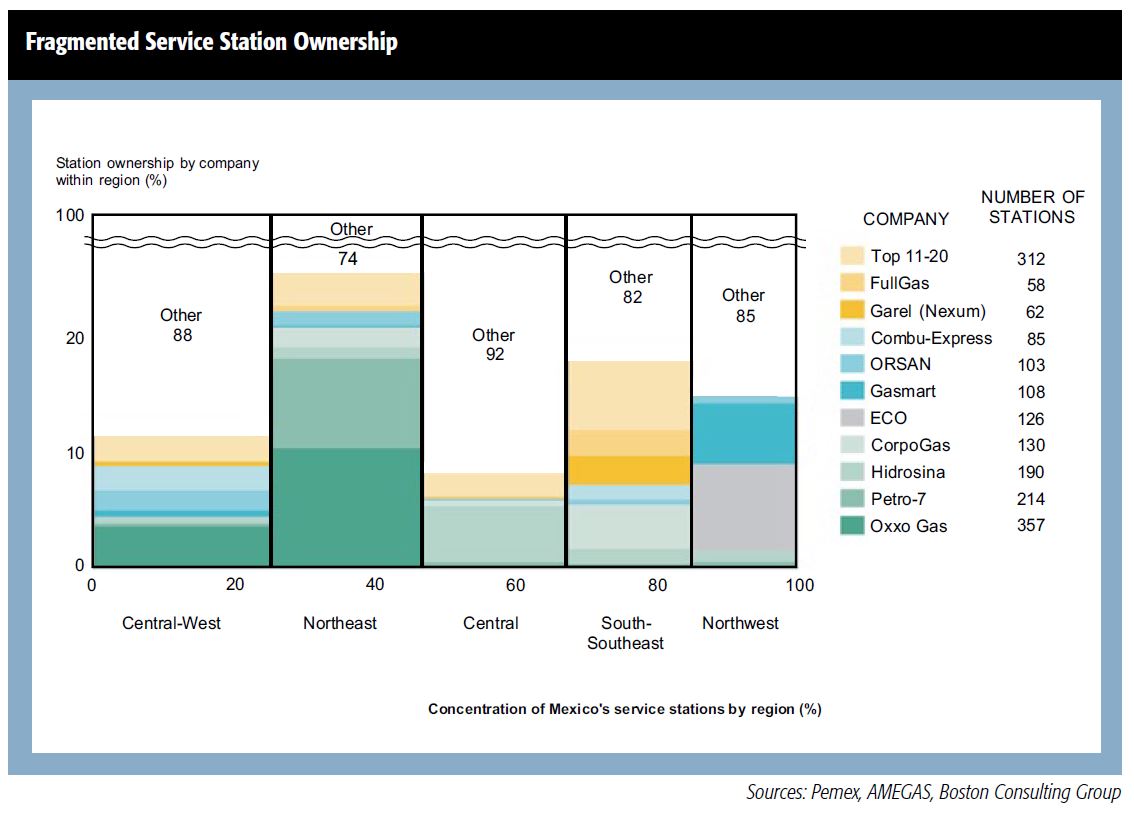 Fuel storage capacity is also inadequate to meet Mexico’s needs, and the shortfall significantly limits the country’s ability to hold inventory: Mexico typically holds about six to eight days’ worth of inventory vs. an average of roughly 25 days for developed OECD countries. This increases the risk of stockouts, or shortages, which could have substantial effects on the broader economy.

It also could mean higher-than-normal transportation costs for consumers if stockouts do occur and fuel must be secured on an emergency basis. Fuel inventories often are particularly low in the country’s central, central-west and south-southeast regions.

So in addition to pipelines, the private sector has begun to invest in storage. Plans to invest roughly $250 million to expand capacity over six sites across Mexico have already been announced. The largest initiative is Orizaba Energía’s investment of $115 million to build 2.7 million barrels of capacity in Tuxpan.

While these investments will undoubtedly make a difference, the shortage of capacity will likely persist for at least the next several years, exacerbated by Mexico’s projected strong growth in fuel demand. As with the shortage in pipeline infrastructure, this translates into an opportunity for investors.

The midstream supports Mexico’s retail fuel sales network, which consists of roughly 11,000 service stations. Historically, Pemex has controlled the branding, marketing and supply of products offered by these stations, virtually all of which were owned by a fragmented base of private investors.

Today, ownership of service stations remains fragmented, with the top 20 players in each region representing 8% to 26% of station ownership.

But reform promises substantial change, and the market is already shifting rapidly. Alliance activity among station owners has emerged and is accelerating—the two largest alliances to date, Mega Alianza and Grupo Gasolinero G500, each represent more than 1,000 stations—with participants seeking to capture scale advantages in order to gain sourcing strength and to improve their leverage in negotiations with potential acquirers.

The market is changing on other fronts as well. Local players, such as Oxxo Gas, Petro-7 and Hidrosina, are creating their own brands in an effort to differentiate themselves. Nonfuel retailers, such as Costco, have announced their intention to add service stations to existing stores.

International oil and gas companies, including Texaco, Gulf Oil and BP Plc and refiners such as Andeavor (formerly Tesoro), have also announced plans to enter the market. Andeavor, specifically, has been decisive in its intentions.

When Pemex auctioned off its available pipeline and fuel storage capacity in northwest Mexico in May 2017, Andeavor aggressively participated in the first phase, winning all of its bids and obtaining exclusive access to Pemex’s midstream infrastructure. This positions Andeavor as the only player besides Pemex able to provide fuel supply to that region for years to come.

Andeavor is a major refiner and marketer in California and other states in the West, with midstream assets linking its refineries to retail outlets carrying several brands, including Tesoro, ARCO and Exxon.

Since 2017, the regulator’s efforts to force Pemex to offer infrastructure capacity to private companies appear to have stalled. No further auctions have taken place, increasing the likelihood that private players will have to develop or secure access to new infrastructure.

In addition, moves to introduce arm’s length infrastructure pricing for Pemex, which would have put the state company on the same footing as the private sector, have seemingly not materialized as the prices it charges retailers have not changed.

For foreign investors, it is a reminder that Mexico’s energy liberalization is not straightforward, and they need to plan accordingly.

Despite this, increasing numbers of players are joining the fray, wanting to capture the retail opportunities provided by the market’s combination of growing demand, fragmented ownership of stations and low differentiation among stations.

The biggest winners stand to be those that can best satisfy the evolving needs and preferences of Mexico’s consumers, whose experience until recently had been limited to Pemex’s offering. Today’s consumers have a fairly short list of must-haves: a trustworthy source of fuel that offers quality products and delivers full liters instead of fraudulently reduced amounts.

The list is sure to expand, however, as more companies enter the arena and the array of choices for consumers grows.

But amid the opportunities for companies are some unknowns. One is how willing Mexico’s consumers will be to pay a price premium for differentiated services. Last year’s fuel price increase, which occurred when the price ceiling was lifted, sparked consumer protests and anger. This raises the possibility that consumers might not be willing to spend quite as freely as companies hope they will.

Challenges also loom for market participants. Fuel throughput per service station, which has fallen by about 4% annually since 2004, could fall even further, given the potential for accelerated growth in the number of stations in the near term. In Brazil and Spain, for example, the number of stations increased dramatically during the first few years following market liberalization.

Pressure on margins could also intensify, particularly as hypermarkets and convenience stores capture growing market share with expansion into fuel sales to broaden their offerings and attract additional traffic to their stores. Such expansion has proved a winning move for these businesses elsewhere.

Hypermarkets in France and the U.K., for example, whose operational strategies are based on low prices, have achieved market shares of 59% and 38% in their respective fuel markets. In the U.S., where 80% of convenience stores also sell fuel, nonfuel sales account for two-thirds of the sites’ profits.

Mexico’s evolving fuels market will continue to offer opportunities as energy reform continues. For current and potential market participants, capturing those opportunities will hinge on moving quickly and, critically, choosing the right strategies.

No one strategy will fit all players; each company will need to chart its own course based on its particular strengths, ambitions and understanding of the market.

In formulating their strategies, integrated oil and gas companies, refiners and traders will have to ask themselves questions such as the following:

Service station operators will need to answer a different set of questions:

The answers to these questions are paramount for companies wishing to participate throughout the fuels value chain in Mexico. Given fast-paced liberalization, companies that are able to quickly make the right decisions will certainly succeed in what is shaping up to be a large, underserved and potentially very profitable market.

Eugenio Lohr and Javier Romero are with The Boston Consulting Group in Mexico City. Clint Follette is based in the firm’s Dallas office. 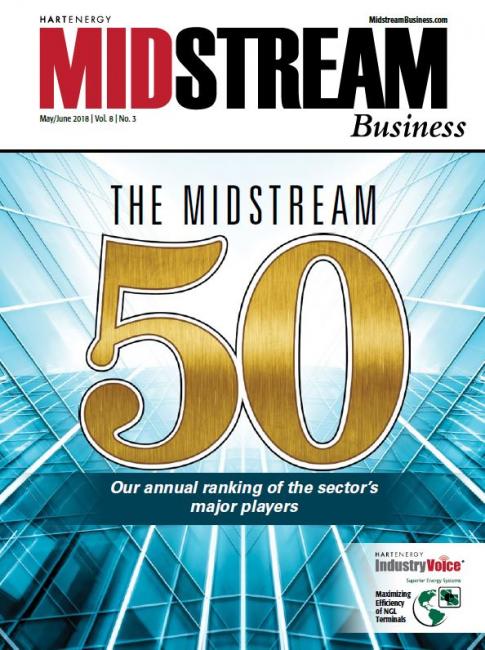