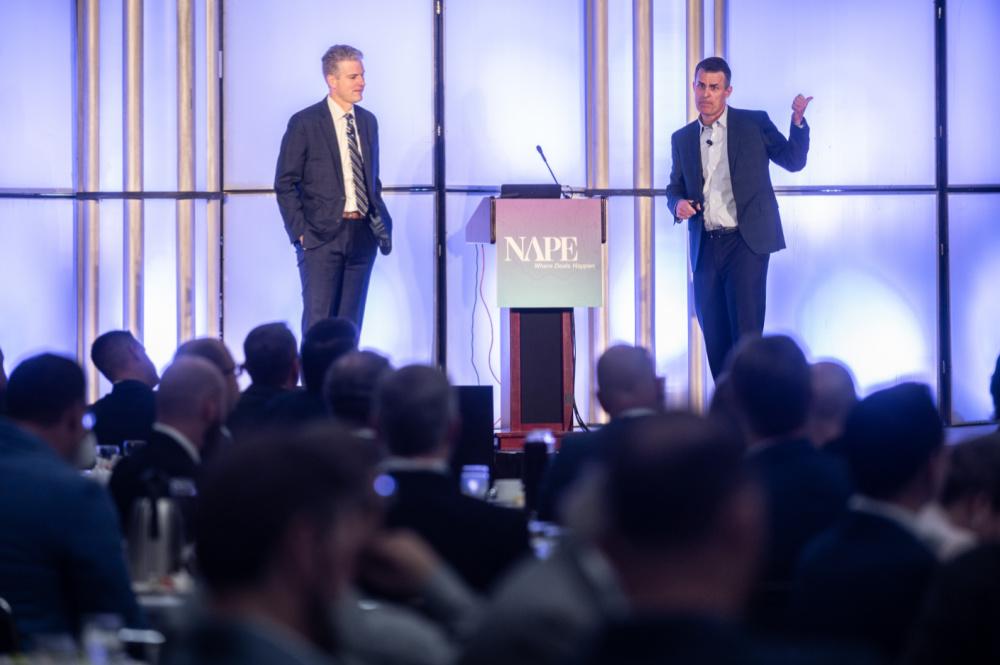 An old sports adage used to introduce speakers at this year’s NAPE Summit Global Business Conference, which would have been considered an unusual way to kick off an oil and gas event if the presentation itself wasn’t so unique.

“Today, we’re going to play a game and the game is going to be like a college football pick game,” Mike Wichterich, executive chairman of Chesapeake Energy Corp., told NAPE attendees during the conference’s keynote luncheon.

For his speech, Wichterich put together an interactive presentation that included him comparing independent oil and gas companies to college teams and why he considered them top performers with the disclaimer “you should not listen to my picks on your investments.”

“If you hate this speech, tweet anonymously and be really mean about it,” Wichterich jokingly added referring to the Energy FinTwit crowd with a special shout out to @Mr_Skilling.

Wichterich has served as the chair of Chesapeake’s board of directors since February 2021. He also previously served as interim CEO at the Oklahoma City-based company until Nick Dell’Osso’s appointment as Chesapeake’s new president and CEO last October.

During his career, Wichterich, a self-described “small company guy,” founded three Permian-focused E&Ps that generated total sales proceeds of more than $2.8 billion and profits of more than $1.4 billion.

Wichterich said his presentation at NAPE had been given clearance by Chesapeake on several conditions including that he not speak about Chesapeake. Another requirement—he needed to be joined onstage by Gordon Pennoyer, DrivePath Advisors managing partner who now serves as Chesapeake’s director of communications and investor relations.

With Wichterich giving the numbers side and Pennoyer adding color from the PR perspective, the pair predicted top performers in the E&P space. At the end of each pitch, NAPE attendees had the opportunity to vote via text message on which stock they thought would be the biggest winner.

Kicking things off with the University of Alabama, which has one of the most decorated football programs in NCAA history, Wichterich said: “When I think about oil and gas on which one is the best, I think about the Permian Basin.”

And when you think about the Permian Basin, he said, you think Pioneer Natural Resources Co.

The secret sauce that really ties the two together, according to Wichterich, is the “two old guys at the top”—Alabama head coach, Nick Saban, and Pioneer CEO Scott Sheffield.

Moving on from Alabama and Pioneer, Wichterich declared ConocoPhillips Co. the next “it” company among independents by comparing ConocoPhillips to current college football national champs—the Georgia Bulldogs.

“Look at the numbers,” he said, “since they bought Concho, they’re skyrocketing.”

Other independents included in Wichterich’s picks:

Before wrapping things up, Wichterich did manage to slip Chesapeake into the presentation.

“And I know you want to talk about the $9 billion in free cash flow over the next five years, but, no, not going to do it,” Pennoyer insisted.

However, following their presentation, the pair took questions in the Q&A room where they were joined by Dell’Osso and Mohit Singh, CFO of Chesapeake.

“The industry has been through some really, really tough times,” Dell’Osso said during the Q&A at NAPE, “but given the healthy balance sheets that we talked about a few minutes ago, given the willingness of the industry to moderate growth in favor of financial returns, really makes the ability of the industry to have a longer horizon and a more stable employment and therefore more opportunity set for people in it—just much better.”

Without the conditions set for Wichterich’s keynote speech, Dell’Osso was also able to comment on Chesapeake’s recent dealmaking.

“We believe very strongly in the ability to optimize capital across the portfolio when you have more than one place to put the money,” Dell’Osso said.

“It’s just like a portfolio of stocks; if you have more than one stock in your portfolio you can optimize returns with some diversification,” he said. “We think that’s absolutely true for a portfolio of an oil and gas assets.”

As to why Chesapeake decided to sale its Powder River Basin position to Continental Resources, Dell’Osso described the PRB as a good asset but said when competing for capital in the Chesapeake portfolio, it was always going to lose out to the company’s Eagle Ford asset.

“The Powder wasn’t very big,” he explained. “It was going to be really expensive to get big.”

“It was a tougher fit and Continental is going to do well with it because they are going to be big in the basin. … They’re going to consolidate it in with the other stuff they’re doing,” he added.