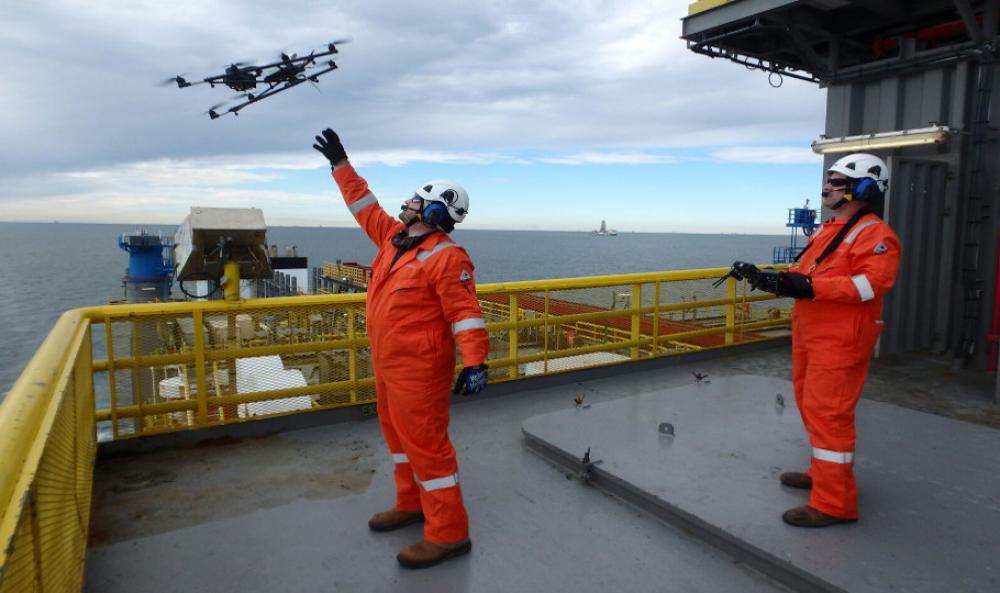 The use of UAS facilitate more regular monitoring of areas on offshore assets that might need repairs. (Source: Sky-Futures USA)

On a breezy winter day in 1903, Orville Wright made the first controlled, powered and sustained heavier-than-air human flight in the world’s first airplane near Kitty Hawk, N.C. In the century since, humans have adopted flight technologies to perform other firsts, like landing on the moon, breaking the sound barrier and making a vessel-to-vessel cookie delivery.

The Maersk Group did just that earlier this year to test the feasibility of using unmanned aerial systems (UAS) or vehicles (UAV), aka drones, to deliver small packages to vessels. Launched from the back deck of a barge, the Xamen Technologies-built LE 4-8X Dual octopod delivered across the fog-covered waters off Kalundborg, Denmark, a 2.6-lb cookie payload 250 m (820 ft) to the Maersk Edgar tanker, where it hovered 5 m (16 ft) above the tanker’s deck before dropping the sweet treats via a remotely activated switch.

The successful test was the first step in what the company sees as the future of deliveries to vessels of smaller packages that could cut time and trim costs. Other potential uses for UAS are developing rapidly, with the company seeing the technology as way to carry out inspections of challenging areas. The ability and versatility of UAS is not lost on other organizations that are adapting and adopting for their own use.

Airborne Surveys
One such organization is the American Bureau of Shipping (ABS). As its employees survey many offshore assets, the organization wants to ensure that safety is at the forefront of their work day.

“Drones provide a safer environment for our surveyors to get up-close views of something not in a normally accessible area. They can do so with a video camera attached to the drone,” said Jim Wolling, principal surveyor for ABS. “It also eliminates the need for the asset owner to provide another means of access such as staging the tank or providing some other temporary platform for the surveyor to use.

“The drones are being used to extend the reach of the surveyor. The surveyor will always be onsite and doing his visual examination. In many cases, the requirements are for the surveyor to do a visual examination of accessible locations. The use of drones might be used to increase the area that is considered accessible. In the future, consideration might be given to the use of drones as an alternative means of access to areas not readily accessible.” 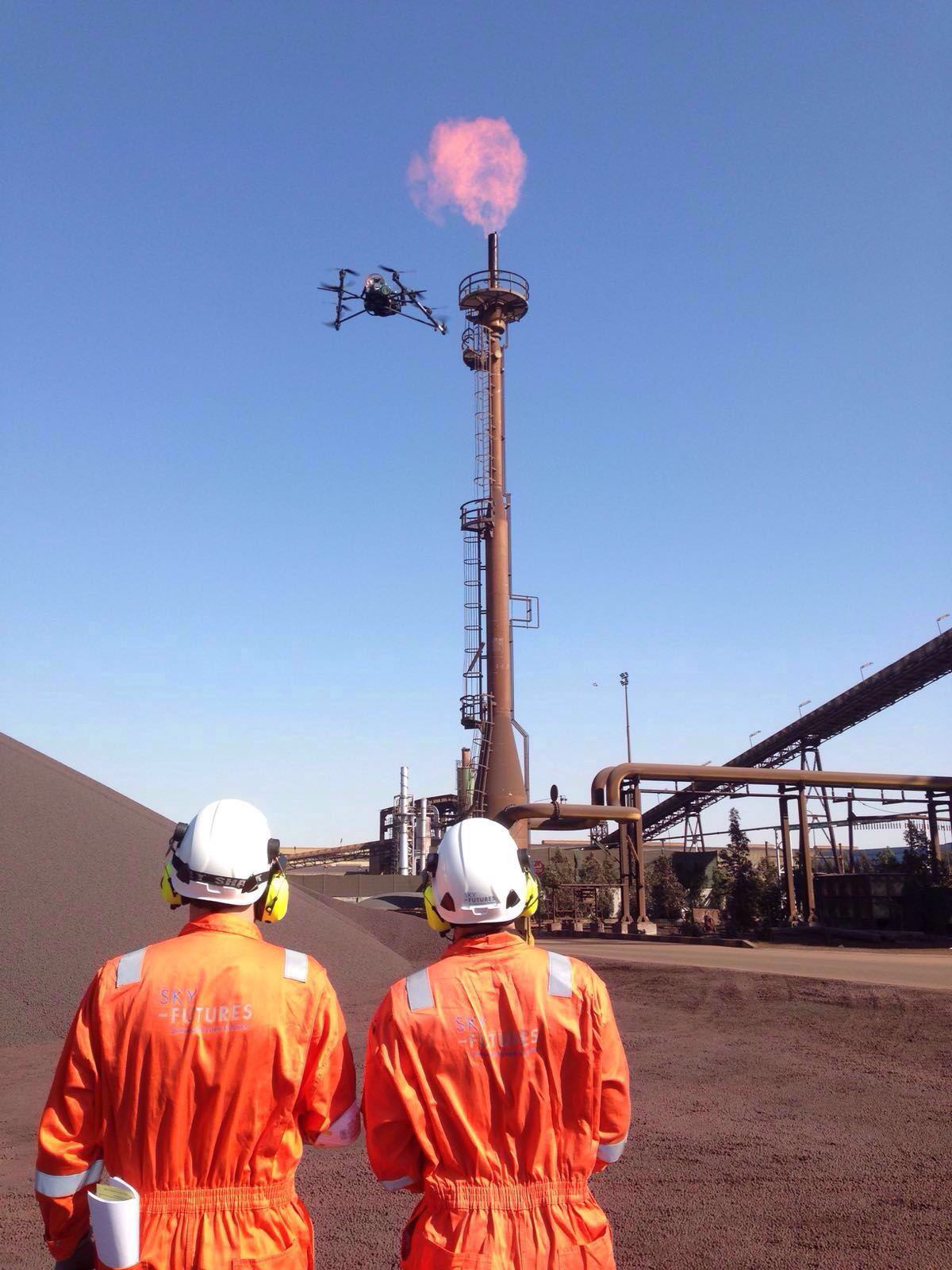 In addition, the convenience of drones can lead to extending the life of an asset. Instead of doing checks during scheduled maintenance, drones can facilitate more regular monitoring of areas that might need repairs or areas of corrosion, further ensuring the integrity of the asset.

“Drones allow that assessment to be done, which may reveal whether or not repairs or action needs to be taken, so it would be a bit of a costly expense for an owner to provide access only for the surveyor to verify that, as it turns out, everything is OK,” Wolling said. “Now the owner has incurred some additional time and expense just to satisfy ourselves and do a proper survey, so we eliminate that need.

“If the drone does indicate a condition exists that does need to be repaired, the owner can have a good idea of the scope of it and can plan for it accordingly, minimizing expenses and downtime.”

“We can basically do most of the things that rope access does with a much smaller footprint,” he said. “Sky-Futures has performed these inspections for five years globally, many of those in the North Sea and now the Gulf of Mexico and Far East. We can inspect in five days what it would take a rope access team to inspect in eight weeks, which is pretty astounding. We charge similar day rates, so that’s where the efficiency and cost savings comes in.”

James Bond, vice president of marine technology for ABS, added that the organization sees the use of drones as adding another tool for the surveyor to use in the inspection process.

“It’s really providing an enhanced visibility. We have certain survey methods that are successful, and based on what surveyors are seeing on site, they can request a closer look at some areas. Having the drone provide that capability rather than the need for the costly staging and so forth is where it’s going to enhance the process.”

Third-party Operations
Working in tandem with a licensed pilot provided by a third-party UAS operator that holds the U.S. Federal Aviation Administration (FAA) Section 333 exemption, the surveyor can focus on the task of surveying.

“Our surveyors are there to take a look and understand what is there. We don’t want them distracted by all the things that have to be thought about with flying the drone,” Bond said. “We want a clear separation of the responsibilities, so we continue to do the job we need to do and do it well.”

ABS is currently developing a set of guidelines to allow UAS operators to be certified by ABS as external specialists, Wolling noted.

“We’re nearing completion of some guidelines that will allow UAS operators to be certified by ABS as external specialists. It’s a series of guidelines in place for what’s required to achieve the certification,” he said. “To complement that, we’ll also have instructions to our onsite surveyors on various aspects of use of the drones from safety to visual capability of the cameras and equipment.”

To be clear, the drones used for surveying are not the run-of-the-mill variety one would find on the shelves of an online retailer like Amazon or a hobby store. These commercially rated drones are subject to regulation and require a private pilot license to operate per FAA guidelines.

“One important trait of commercial UAV is that they’re stable in wind. For example, ours can fly in up to 29 knots of wind, with a battery time anywhere from 15 to 20 minutes. We limit our flights to about 10-minute intervals because we gather so much data during that 10 minutes that we just found that it’s easier to break it off into 10-minute flights,” Forte said.

He added that one of the best things about their drones is that it is equipped with three levels of autopilot and Intel processors that send 1,000 corrections a second to the drone’s motors to keep it more stable in wind.

The recorded data are uploaded to the cloud and analyzed with Sky-Futures’ proprietary software, where the client is able to access and share it, he added.