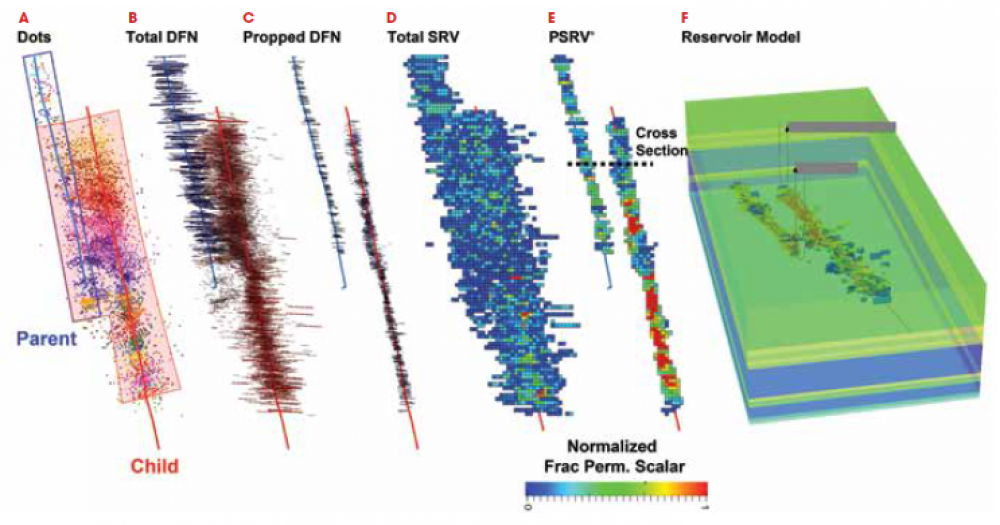 In the last two years, there has been an increase in the drilling of infill wells, also known as child wells. The aim of these infill wells is to produce hydrocarbons left in place from older (or parent) wells, or to continue field development with increasingly modern completion designs. The common experience shared throughout the industry is that the interaction between parent and child wells has often proven to decrease EUR and capital efficiency for both parent and child wells.

Interactions between parent and child wells can incur many challenges during completions and production. An important component of these challenges is the extent of the low-pressure volume created by the production of the parent wells. This low-pressure zone can often divert fluid and energy away from the completion of the child well. The thieving of energy from the child well to a previously stimulated region not only reduces the completions efficiency of the child well by minimizing the recovery factor, but it also can reduce production in the parent well, either temporarily or permanently.

Case history
MicroSeismic Inc. and an operator in the Permian Basin worked together to create a reservoir model using the microseismic-derived fracture permeability to predict the impact of parent/child well interactions for future child wells. A unique aspect of this case study is that both the parent and child wells were monitored four years apart, allowing not only the spatial extent of the stimulated fracture network to be mapped but also allowing direct comparison of the differences between the treatment designs and stimulated volumes. Five years of production data were also used to calibrate the fracture permeability model.

Figure 1 demonstrates the microseismic engineering workflow that was used to analyze the impact of the child/parent interactions. It begins with mapping “when” and “where” the rock is breaking for both wells (Figure 1a). The outlines of the microseismic event clouds of each well are used to illustrate when and where the child well interacted with the parent well. For instance, a symmetric hydraulic fracturing zone around a well was expected when there are not any interactions with nearby wells or geology. This type of geometry/ behavior can be seen in the outline for the parent well as well as along the southern half of the child well (Figure 1a); this is the expected behavior of a well treated in isolation.

The discrete fracture network (DFN) model in Figure 1b was derived for each microseismic event that will be used to create the normalized fracture permeability model. The area and orientation of each fracture was determined from the amount of energy and waveform characteristics of each event. Fracture apertures are then calculated using empirical relationships with the length of the fracture planes. This DFN model is then calibrated to the total injected volume, corrected for fluid efficiency, and the bulk density of the injected proppant (it is important to note that the child well had 45% more injected slurry volume than the parent well). By scaling the DFN, it is possible to account for microseismic events that were too small to detect. The fracturing geometries for each treatment stage are used to guide the proppant from the perf clusters and out through the total DFN until all the material has been placed. This results in a subset of the DFN model that is classified as the propped DFN (Figure 1c).

A cross section of the pressure depletion around the parent well after four years of production is shown in Figure 2a. It was calibrated using the production data. The pressure contours are fairly symmetric around the well, as is expected for a well drilled and completed in isolation and not affected by nearby depleted areas. At this point, the parent well was shut in for the stimulation of the child well.

Figure 2b shows approximately four years and one month of production, which includes the contribution from the child well. The outer pressure contour is shared by both wells and may suggest possible communication in production. The inner pressure contours of each well are very different. For instance, the child well shows that it has 50% more pressure depletion than the parent well, and this can be attributed to improved treatment designs.

There are several mitigation strategies that could have been implemented in this scenario that may have minimized the impact of the child/parent interactions on the completions of the child well. The more costly strategies include injecting fluids into the parent well to increase pressures to just below or above the fracture gradient. This method could have proven successful; however, in this instance, the operator chose the simple and minimal-cost approach, which was to simply shut in the parent well during the stimulation of the child well. Although the parent well did suffer from frac hits, the calibrated fracture permeability model shows that the impact of these frac hits was short lived.

Figure 2c shows the hypothetical locations of future wells that could be modeled with the information yielded by the microseismic engineering workflow. From this workflow, the reservoir model now contains the calibrated fracture permeabilities for different completions designs. This model can then be used to model different scenarios to find optimum well spacing, landing depths and completions designs on a much larger scale.

One of the unique outcomes of this case study was the observable differences in the microseismic responses between the different treatment designs. There is no reason that the same refinements to treatment design could not have been made in real time.

In summary, production performance changes due to the interaction between parent and child wells, as well as the difference between treatment designs, can all be modeled using the microseismic-derived fracture permeability values in a reservoir model.