Permian outlook: “I think it will be very robust for a long time. There are multiple benches yet to be produced. There’s a lot more to do in the Permian, which is why we continue to see an incredible amount of activity in this low-price environment.”

Quotable: “It doesn’t matter who you are speaking to—always use ‘please’ and ‘thank you’ and never say, ‘that’s not my job.’”

Never forget: George joined the Marines after 9/11, which occurred while he was an undergraduate student leaning toward joining Teach for America. “I decided that the best way to serve my country was the military. I wanted the ultimate leadership experience.”

Military career: After college, he served in the U.S. Marine Corps with the rank of captain in the infantry, and saw combat in Iraq from 2006 to 2010. As an operations officer, he helped train Iraqi border police along the Jordan-Syria border. As a rifle platoon commander, he safely led more than 100 patrols to secure an Iraqi city.

Civilian career: After active duty ended, he was a summer associate in Morgan Stanley’s investment banking division in New York. Next, from 2013 to 2016, he was a vice president of Energy Spectrum Advisors in Dallas. In 2015, he joined the Marine Reserves and since then has been the company commander of C Co., 4th Recon Battalion and promoted to the rank of major. In 2016, he and Brennan Potts co-founded Accelerate Resources.

Exemplary: George was part of student government and received the Frank J. Ruck Leadership Award during college. Upon graduation from the U.S. Marine Corps Basic School, he received the Col. William B. Lenley Academic Award. He graduated from Expeditionary Warfare School. He is a multi-engine aircraft pilot and an advanced diver. 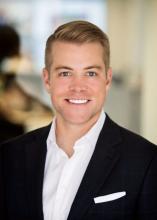