She said she observes an active and shifting market in terms of advisory needs. With many restructurings now completed, strategic portfolio high-grading and reshaping efforts continue to keep companies very busy, along with the heightened need for corporate defense, notably due to the uptick in activism. The variety of work allows her to be on the qui vive with an industry-wide transition to not only withstand but also thrive in the current price environment.

Career path: She joined Evercore after nearly a decade in the advisory group at BNP Paribas; initially in Paris as an M&A generalist, then specializing in energy, transport and infrastructure, and most recently in New York, where she helped build the advisory practice. She believes “hard work, perseverance and positivity do pay off.” Crespy was one of BNP’s rare hires in 2008 at the worst of the stock market crash and in the context of a global hiring freeze. Prior to that, she worked at The World Bank in Washington, D.C., in the finance and private sector development team covering the Middle East and North Africa.

Client-focused: She built a client portfolio from an early stage and stresses the importance of “developing the relationships you make along the way despite the intense workload, complexity and short deadlines of live deals.” Client continuity is her leitmotif, so she invests in business relationships “through thick and thin, not only at a time where it suits you,” delivering uncompromised advice as the cornerstone of value proposition to clients. She led tough discussions, notably, “ when realigning sellers’ valuation expectations with market reality.”

Navigating headwinds: Crespy advised on a series of large sell-side deals for a supermajor that closed in the second half of 2014 and in 2015 despite a very challenging price environment. She said she kept the buyers at the negotiating table by being “commercially nimble and creative in deal structures, which allowed both parties to ultimately transact.”

Impactful: Crespy enjoys working in a sector that is pivotal in transforming the world and is glad to be part of a generation working in the sector “at a time of profound change in the ways competitively sourced energy is produced and consumed.” She leads with a coaching approach and strives to “align interests in order to achieve the best-in- class performance” from her team. Helping and motivating others, “has often developed into trusted and long-lasting relationships with team members and clients.”

Broaden your horizons: Crespy has worked on more than 40 cross-border deals spanning six continents, 23 countries and 11 sectors. She suggests young professionals “be bold from the get-go and take advantage of the valuable experience you gain from working abroad, at a time when it is often easier to do so.” 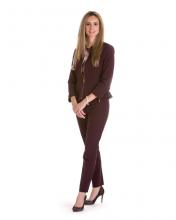