Entry into oil and gas: He began his career in June 2006 as an analyst with the global energy group at UBS Investment Bank. Then, he joined First Reserve in August 2008, ultimately becoming a vice president before departing in July 2014 to become executive vice president and CFO of Escondido Resources II LLC from July 2014 to April 2016.

Advice for young professionals: Always work hard at whatever you do. Be honest and outspoken—know when “to call a spade a spade.” You can admit you don’t know an answer, but only if you are willing to go find it. And, leave your comfort zone. “Expose yourself to new challenges.”

A bit more: Strive to work for a company that is receptive to and appreciative of hardworking, eager job seekers. Originally planning an automotive engineering career, he received this advice after Big Three automakers told him the University of Virginia was not one of the schools from which they routinely sought job applicants.

On the business: “For all its faults, the oil and gas industry has always been rich in opportunities and it continues to reinvent itself. This creates a lot of excitement!” 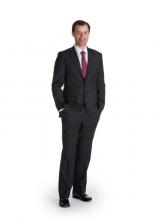