The Trump administration has backed off its regular oil and gas lease sale schedule, postponing at least two auctions that had been set for later this month after delaying a major sale in New Mexico in May, according to an official web site.

The moves mark a shift for the U.S. Department of Interior, which had proceeded with a slew of oil and gas lease sales on public lands earlier this year as the outbreak of the coronavirus caused energy prices to crash.

The U.S. Bureau of Land Management (BLM), the arm of the Interior Department that oversees lease sales, postponed a sale of seven oil and gas leases on more than 10,000 acres in Nevada that had been scheduled for June 9. It is also delaying the sale of two parcels on 88 acres in Mississippi that had been expected on June 18, according to the online auction platform EnergyNet.

A Utah sale of four parcels on more than 4,000 acres scheduled for next week was also removed from the EnergyNet's calendar. BLM officials in Utah had not initiated a 10-day public protest period required before a sale may proceed.

BLM officials did not respond to questions about the status of the sales.

Last month, the administration abruptly postponed an auction of oil and gas leases in New Mexico without providing a reason. It would have been the first government oil and gas auction since U.S. crude oil futures briefly plunged below zero for the first time in history in April.

BLM offices in two other states—Wyoming and Colorado—still have lease sales scheduled for late June.

The new ethylene storage tank will facilitate faster loading and enable the Morgan’s Point terminal, owned 50/50 by affiliates of Enterprise and Navigator, to reach an annual nameplate export capacity of 1 million tons per year 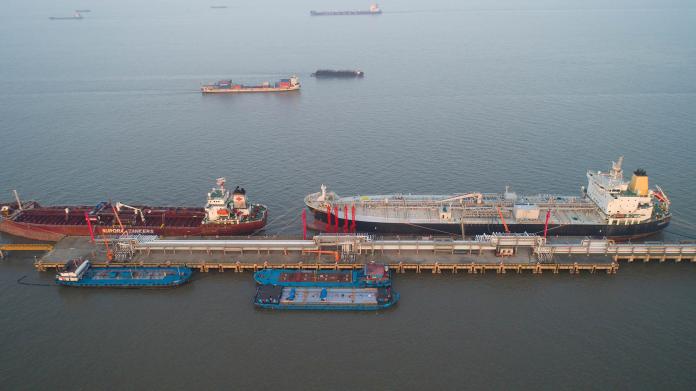 Chinese Buyers Snap Up US Oil at Widest Discounts Ever

WTI discounts are $6 to $7 a barrel, increasing pressure on producers to shut in wells.