Pemex will focus on shallow-water projects and onshore plays and avoid investing in its deepwater riches for now, as the ailing Mexican state-run oil company seeks to turn around a 14-year slide in crude production, a top official said on June 20.

CFO Alberto Velazquez outlined the approach Pemex will take at a conference in the colonial city of Leon. He emphasized that Pemex has no plans to invest in costly and technologically complex deepwater projects in the Gulf of Mexico (GoM) but will instead focus its E&P budget on the country’s shallow-water and onshore potential.

“We are not going to invest in those types of developments,” said Velazquez, referring to deepwater projects.

The vast majority of Pemex’s current production comes from shallow-water areas clustered around the southern rim of the GoM, off the coast of the states of Veracruz, Campeche and Tabasco.

While the company has drilled wells and made discoveries in Mexican territorial waters in the deepwater GoM and has a joint venture partnership in one such project with Australia’s BHP Billiton, it has yet to produce any oil or gas there.

Pemex’s current crude production averages just under 1.7 million barrels per day (MMbbl/d), down nearly a half from peak output of about 3.4 MMbbl/d in 2004.

Mexican President Andres Manuel Lopez Obrador has pledged to raise Pemex output to 2.5 MMbbl/d by the end of his term in 2024.

“The most important thing is we’re convinced of what we’re doing,” he said.

Pemex, the world’s most indebted oil company, has faced mounting pressure to improve its finances and invest more in its profitable exploration and production business.

Earlier this month, Fitch Ratings downgraded Pemex’s roughly $80 billion of bonds to speculative grade—or “junk” status. A second downgrade from another ratings agency would trigger forced selling from funds whose mandates prohibit them from holding such assets.

Among many fixed-income investors, Pemex debt is already trading like a junk asset.

Velazquez added that Pemex’s expects to invest between US$13.2 billion and $13.7 billion (250 billion-260 billion pesos) annually in exploration and production over the next few years. 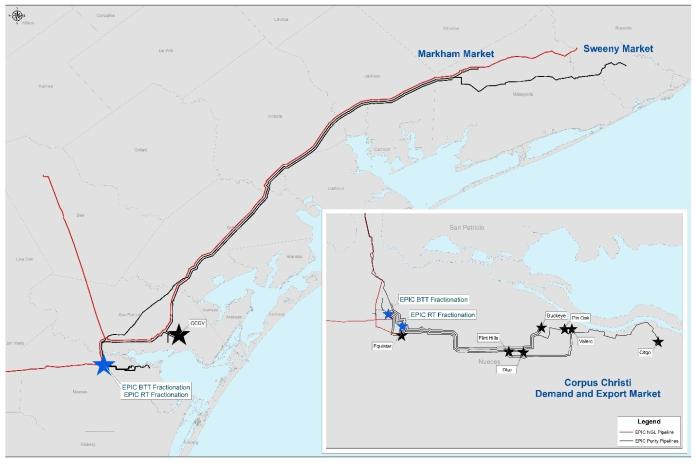 EPIC Y-Grade LP has completed its 165-mile pipeline from the EPIC Robstown, Texas, fractionation complex, to the Sweeny fractionation and storage complex, which includes Phillips 66 and Chevron Phillips Chemical, the company said on Oct. 5.