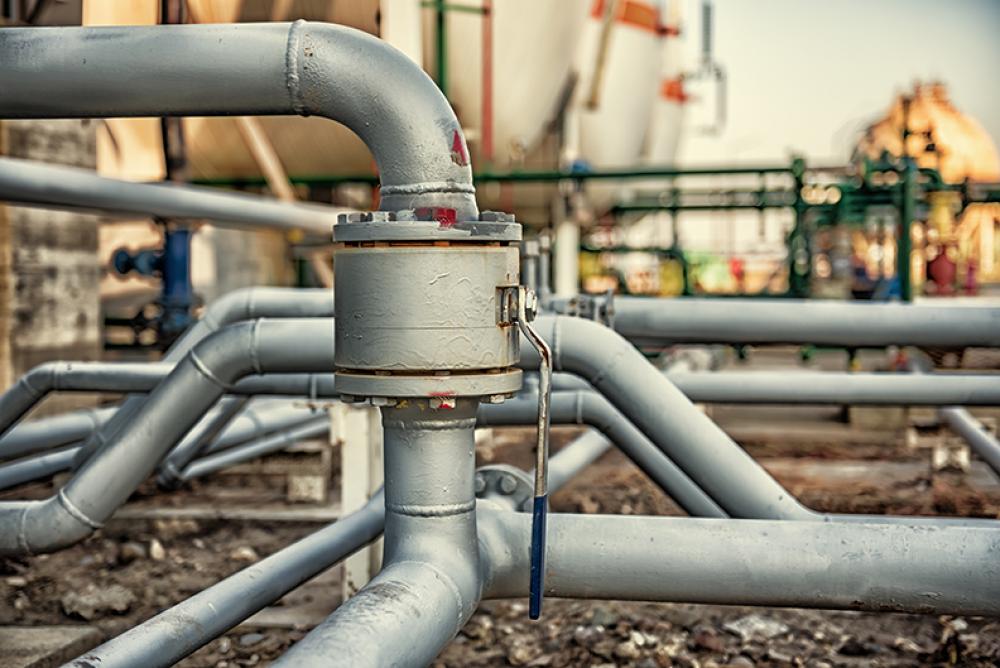 If you haven’t seen it yet, you aren’t too late to participate in the soft launch of What’s Affecting Gas Prices This Week. This is the second edition of a new weekly offering from the integrated global energy advisory professionals of Stratas Advisors. We welcome your feedback and intend to continue to build the offering as we have done in with the What’s Affecting Oil Prices This Week which has garnered a significant following in the 42 months since it was launched.

Key Points: When we compare the week ended Oct. 12, 2018, to the previous week ended Oct. 5, 2018, we see moderately tighter conditions which should impact the working gas storage data which the EIA will report this Thursday. Comparing Bloomberg data for these weeks, we see supply being higher by 2.5 Bcf in the week ended Oct. 12 than Oct. 5 but demand also went up a good bit more (+13.9 Bcf). Meaning, the overall market in our view was 11.4 Bcf tighter.

That outlook underpins our estimate of storage injections of 79 Bcf which is currently 2 Bcf below consensus but 5 Bcf above the 5-year average. So unless consensus moves downward, a miss below consensus could be a mild positive for prices after the Oct. 18 EIA data reports. So we think either downward shifts in consensus forecasts or an outright miss on Thursday could support prices above Monday’s closing Henry Hub spot price of $3.28/MMBtu on Oct. 15, which is a few pennies shy of last week at this time.

After Thursday, we believe the additional data that comes out by then will clearly show lower week-on-week comparisons for Canadian imports (pipeline troubles in the Northwest) and higher w-o-w weather demands (cold weather across the East). By then, the market will likely be baking in an even lower likelihood that storage injections for the week ended Oct. 19 will look anything like the 5-year average for the third week of October.

Given what we know now, we are looking towards a preliminary injection estimate for the week ended Oct. 19 that will likely prove to be well under 74 Bcf (maybe in the 60s).

To us, that means the industry will have an even lower than presently expected ceiling on the level of working gas storage at the start of the heating season on Nov.1. We would expect these dynamics to be a positive driver for gas prices as well through the week ahead all else equal. 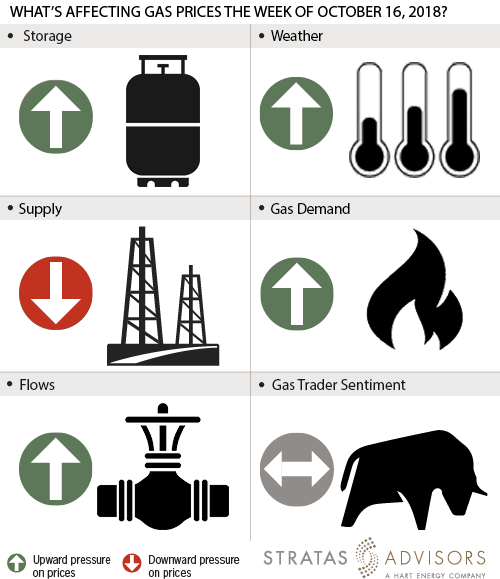 Supply side factors should prove to be a slightly negative factor for continued gas price gains in this report week and ahead as U.S. production grows as storm-related shut-ins are lifted and as production resumes full heartedly in the Gulf of Mexico and as associated gas capture in oily fields comes into the market.

Weather should continue to be a supportive factor in the week ahead for continued gas price gains as cooler weather filters across the Rockies and Midwest and especially down along the Eastern region notably from the Ohio valley to the Atlantic.

Trader sentiment will likely prove to be a neutral factor in the week ahead, with two sequential weeks of positive financial sentiment likely to take a breather soon.

We anticipate that reported storage changes this week will likely underperform consensus but outperform the 5-year average rate of 74 Bcf for this the seconding weekly report of October. After a tighter than current consensus report, we think that by next week this time, the report will be lighter still for the 3rd week of October as the market gets even tighter.

We see it now as an impossibility that the industry will achieve the 5-year norm of 3.8 Tcf in working gas storage by the Nov. 1 commencement of the 2018-2019 heating season. We also think a realization will begin building in the market that we may not even reach 3.2 Tcf.

We expect industrial demand to be inline while domestic utility, residential and commercial demand should be a materially positive factor in the week ahead as space heating.

The flows in the West Coast are the big news this week. On Oct. 10, media outlets reported a fire broke out and caused an unplanned shutdown of Enbridge Inc.'s 2.9 Bcf/d West Coast Mainline system, which supplies natural gas from Western Canada to throughout West Coast. Prices linked to the West Coast gas markets including Permian Basin saw jumps upwards of $0.50/MMBtu on the day of the outage and further gains since then by another $0.50/MMBtu.

Fortunately, the first of the two affected pipelines is back in service, but unfortunately, it was the smaller of the two (with a 30-in. diameter versus the currently out-of-service 36-in. diameter pipeline). Full restart plans and construction requirements along the damaged larger pipeline have not yet been announced.

We anticipate West Coast markets will be tight as the outages last at least until next week.

Flows in Appalachia will improve gradually as more production comes on to fill new pipelines going into service, and flows from the offshore Gulf of Mexico producers are recovering gradually after the passing of Hurricane Michael. To absorb some of this new flow, we see export flows resuming from Cove Point LNG after maintenance concludes there.