Dan Pickering, founder and chief investment officer of Pickering Energy Partners LP, may have summed it up best when he tweeted as the second quarter began: “Toughest three months of the decade coming up. Sigh.”

The double whammy of the COVID- 19 pandemic and an ill-timed oil price war between Saudi Arabia and Russia virtually embodies a “black swan,” which Investopedia defines as “an unpredictable event that is beyond what is normally expected of a situation and has potentially severe consequences.”

This may sound like the plot of a William R. Forstchen disaster novel, but it’s real. So what does the landing of this unwelcome bird on the energy pond mean for the midstream going forward?

“I have never experienced anything like what we are going through today,” Robert (Bob) G. Phillips, chairman, president and CEO of Crestwood Equity Partners LP, told Midstream Business as he reflected on an energy-business career of more than 40 years. “It will be interesting to see how all this plays out over the next two years.”

That two-year time frame Phillips mentioned is significant; it may take that long to set some sort of new normal. Midstream observers see a number of options as midyear-2020 nears, but first it’s important to assess the damage. In the long term, midstream may prove the more stable segment of the energy business, some believe.

Where to put it

The abrupt change in supply and demand left product sloshing around the system. Terminalling scored a business uptick. Storage went into tight supply and rates doubled, Reuters reported as the second quarter began. That trend was “breathing new life” into the Cushing, Okla., crude pipeline and storage hub, the report added. The 2019 M&A deals mentioned in the adjoining Midstream 50 article focused on terminal capacity, and they may prove to be wise moves.

“One of the near-term winners from the combination of higher production and lower oil consumption is the need for storage,” Stifel said in a report, noting the crude glut has brought tankers into a storage role. “Land-based storage is typically cheaper than using ships, but tankers offer flexibility to deliver opportunistically into several markets,” it added.

Stifel said climbing day rates will make waterborne storage uneconomic soon; much of that crude could be dumped on the market as traders cut losses. That would impede a crude price recovery later this year and throw markets into a second-act tailspin in late 2020/early 2021.

“Not only is traditional storage almost full, the contango in the oil markets has put a tremendous amount of oil in floating storage waiting to be delivered. That pushes oil optimism into 2022 at the earliest,” said James Wicklund, managing director of investment banking at Stephens Inc., in a client report.

“It is like someone dropping fresh-baked cookies off to your house during isolation,” Wicklund said, “a very nice gesture that doesn’t really change the situation. Cutting 9.7 million barrels per day in a market that was oversupplied by about 20 million barrels per day last month [March] is better than nothing, but not by much.”

Furthermore, OPEC members’ cheating on past production cuts is the stuff of legend, so a significant portion of the promised cuts likely will never occur.

The crisis led some producers to seek production limits from the Texas and Oklahoma regulatory bodies, though the Texas Railroad Commission voted down its state’s proposal on May 5.

It’s no surprise that producers plan cutbacks, both in drilling and existing output. Lee Tillman, CEO of Marathon Oil Corp., said his firm plans to take “frac holidays” during the second quarter in the Delaware Basin and Midcontinent as it optimizes development plans for the Bakken and Eagle Ford.

Tillman made his comments as the firm announced it had more than halved its 2020 capex to $1.3 billion, down from an initial $3 billion 2020 capital budget. 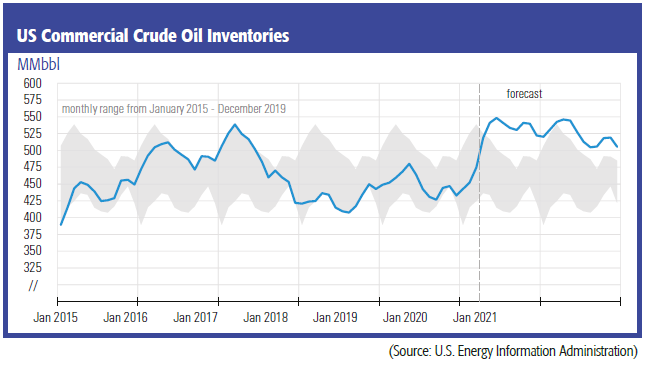 Capex cuts also proved a first move for many midstream operators as they looked ahead to lower production rates and sought to maintain their firms’ financial health.

“We expect midstream companies to reduce capex spending in response to slowing E&P activity and protect balance sheets while trying to maintain distributions,” Stifel said in a second-quarter midstream analysis. “Also, we believe E&Ps may seek relief from midstream in the form of reduced transportation and processing rates, but [we] believe any agreements reached must be mutually beneficial.

“While volumes for crude oil, NGL and natural gas will be reduced, we believe companies anchored with long-haul natural gas pipelines based on take-or-pay contracts and those that have minimum volume contracts are best positioned to weather the downturn.”

“Leverage and liquidity will be more important than ever given the current macroenvironment,” Raymond James said in a report. It added, “Midstream does not appear to be on the brink of ‘busting’ covenants … assuming spending cuts and eventually dividend/ distribution cuts.”

“With MLP index yields at all-time highs, several management teams are utilizing this downturn as a buying opportunity, reflecting confidence in their underlying businesses,” Stacey Morris, director of research at Alerian, said in a midstream analysis.

The most promising prospect for midstream may continue to lie at the terminal/city gate end of the business. The U.S. entered the second quarter behind the global coronavirus curve, and that delay offers bright spots for exports as foreign markets are the first to pull out of the tailspin.

“Management teams we’re talking to have suggested that the flow-through to petrochemical derivatives will take some time and be dependent on how long crude oil prices remain depressed,” Michael Harrison, analyst with Seaport Global Securities LLC, said in a report. “For most companies, we wouldn’t expect raw material relief until [third quarter] at the earliest, though this could provide a nice offset to lower demand and create some margin tailwind if demand has normalized by that time.

“China is recovering faster than anticipated,” he said. “Most plants have resumed operation and are ramping up to more normal utilization rates. While this could be a positive sign for Europe and the U.S. as steps are taken to contain the virus, it remains to be seen if the activity in China is related to demand growth or just some rebuilding of inventories.” However, exports remain a question for Simmons analysts. “Previous worry— will there be enough export capacity? New worry—will there be stranded export capacity?” Simmons asked in a report. Enbridge Inc.’s move out of the proposed Crude Offshore Loading Facility offshore Texas will slow capacity growth, Simmons said, and other export-focused projects now look iffy. So, the export side of things may self-balance.

Any drop in crude production will have a significant impact on gas output as well, given the large amount of associated gas flowing out of the Permian Basin, Bakken Shale and other unconventional plays.

“Even at $45 [crude oil] and $2 [natural gas], gas production can still see a drop of 14 Bcf/d [billion cubic feet per day], which will still leave the gas market short,” Enverus said in an industry analysis, entitled “The Dark Side of the Boom.” That could cause more problems if next winter proves to be nasty. 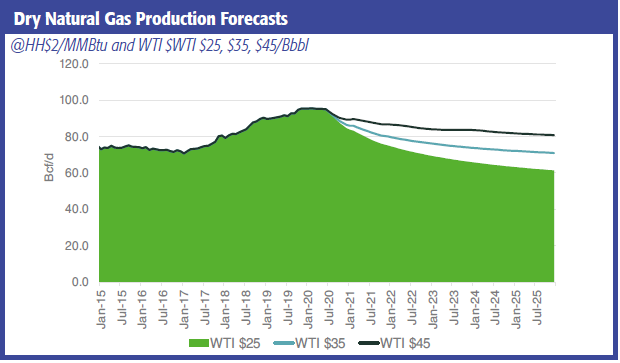 “The oversupplied oil market will keep crude prices low, depressing natural gas production,” the data analytics firm said. “Enverus expects dry gas production to decline by over 6 Bcf/d by December 2020 compared to 2019. This will cause the gas market to go from being long during the summer months to being very short by the winter 2020 to 2021.

“Regarding natural gas, we believe investors underappreciate the impact COVID-19 will have on global LNG and natural gas demand given the rapid reduction in business activity. Recovery in natural gas prices could be prolonged despite the expectation of lower associated gas in the U.S. in 2021+,” it said.

Still, when compared to the oil and gas industry’s other sectors, midstream operations look more stable. Many operators have fee-for-service agreements or take-or-pay contracts. And as cash flow becomes a top priority, the sector might increase in relative importance to investors.

However, financially struggling customers could trouble midstream providers as bills get slow-paid or unpaid entirely due bankruptcy.

The $8 billion project is expected to move 830,000 bbl/d when it enters service by 2023. It will provide a badly needed outlet for Canadian crude, extending from the Hardisty, Alberta, pipeline hub to the existing Keystone Pipeline system at Steele City, Neb.

Another bright spot may be growing gas demand for power generation, which could continue to ramp up as the economy stabilizes. “Although demand has fallen, U.S. natural gas-fired plants are generating roughly 12% more power this year than they did at the same time in 2019,” Baker Hostetler said in a report. “Gas-fired generation was 301,100 gigawatt hours (GWh) through March 18—a double-digit increase—though overall power production fell by 5%. Coal-fired power has dropped by an average of 965 GWh per day this year.”

The Marcellus-Utica play could see an important new power market in New York State. Utility Entergy Corp. announced it will shut in its big Indian Point reactor, located up the Hudson River from New York City, by April 2021. That follows state regulatory orders dating from 2017. Shutting down the plants two reactors will cause a significant drop in generation capacity, 2,069 megawatts—equal to roughly 15% of New York City’s peak power demand.

State regulators moved to close the plant to boost wind power, but that would require construction of more than 2,000 windmills at a time with public opposition to more windmills grows.

The immediate and most viable alternative is clear: gas-fired power generation. 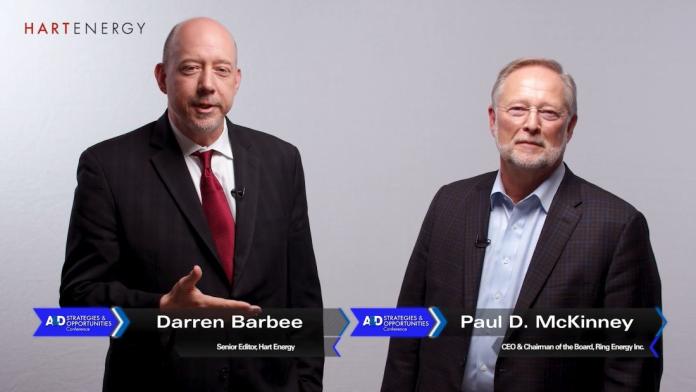 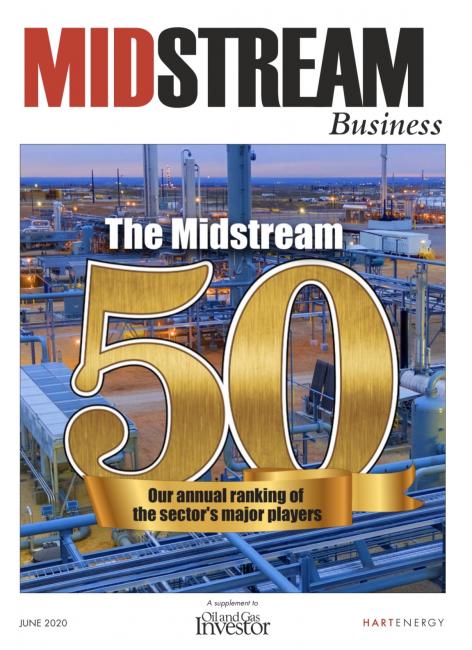