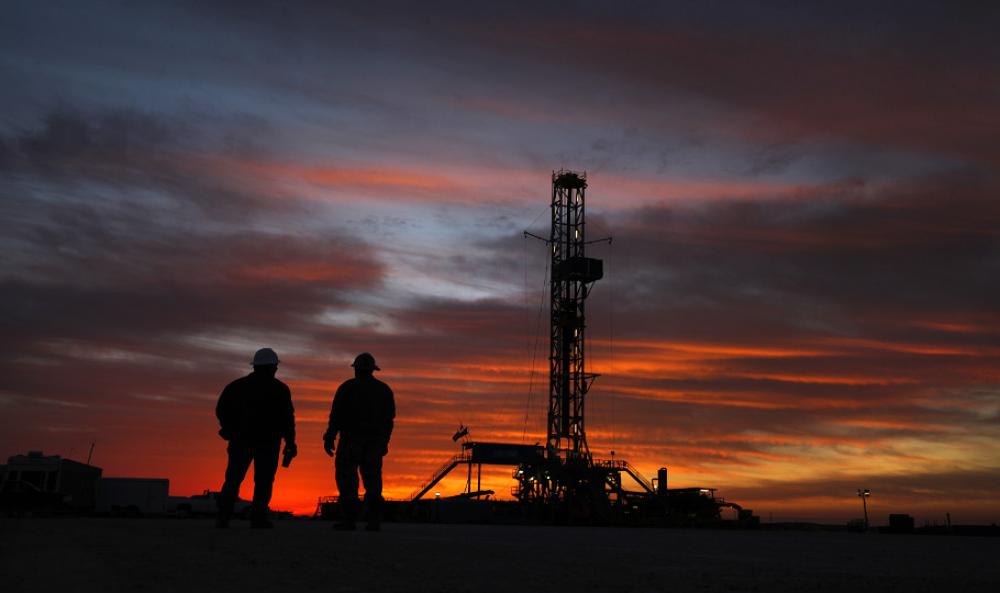 The downed market has fallen short of plaguing certain Texas assets to the extent that has been seen in other basins such as the Haynesville or some of the smaller Midcontinent plays. While the Eagle Ford has been hit somewhat hard in recent years, the Permian has continuously exceeded production expectations and overall activity trends. With breakevens in the sub-$40/ bbl range at West Texas Intermediate (WTI), operators and investors have made a push to gain market share within this basin and to deploy cutting-edge techniques and strategies that will position them well above the general curve at the onset of higher oil prices.

The Permian has seen numerous acquisitions and mergers over the past year, and it is likely that this trend will continue as more operators vie for a spot in the nation’s top-tier region. Two substantial recent transactions involved the complete buyout of private operator Yates Petroleum by EOG Resources. EOG picked up about 200,000 acres situated within mainly Lea and Eddy counties in New Mexico. In addition to absorbing about $245 million in debt, EOG will issue 26 million new shares, valuing the Yates assets at about $2.5 billion. If the entire purchase price was allocated to just the acreage, the implied multiple would be about $12,500 per acre, which is materially less than other land deals that have been recently announced. However, clearly there are other assets and associated production, so the amount allocated to acreage would obviously underscore the relatively low price paid by EOG for some prime real estate.

The Permian in general offers some of the most cost-efficient acreage available. With well costs averaging about $6 million, the bolt-on acreage EOG acquired from Yates in Eddy and Lea counties will certainly bolster its Permian position and allow the company to shift its focus away from its less attractive Eagle Ford assets.

Figure 1 illustrates the median normalized EUR and breakeven figures for what EOG is able to achieve in both Eddy and Lea counties. Currently, EOG’s breakeven is about 42% lower than the total median for the Delaware Basin, at about $36.26/bbl WTI. This is materially lower than what EOG currently is achieving within Lea County with a median breakeven close to $70/bbl, about 13% larger than the total median in the Delaware. 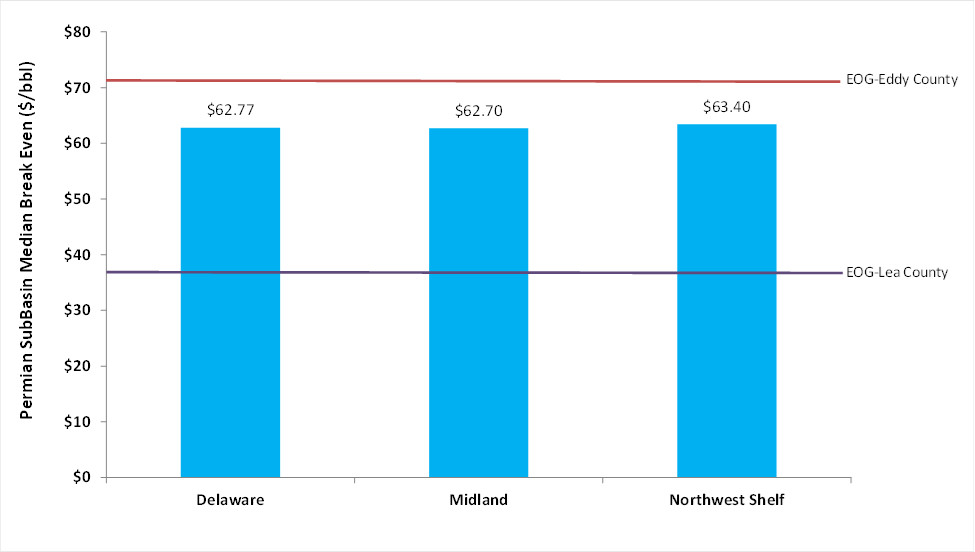 Similar to the EOG acquisition, Devon also has changed the landscape of the Permian by retaining a significant portion of its assets that had previously been up for sale. Through this round of acquiring certain locations and divesting others, Devon collected about $3.2 billion from the divestiture of assets within the San Juan, Mississippi Lime, East Texas, Granite Wash and parts of the Midland Basin. The retention of its Midland property gives the company about 15 Mboe/d in legacy production. Figure 2 shows each operator’s yearly 30-day IP range sized by normalized EUR (reserves per 305 m [1,000 ft] of lateral). Devon’s average normalized EUR increased by roughly 70% in 2015 relative to 2012. It is not as impressive as Concho’s 130% increase or the gargantuan improvement recorded by Occidental; however, Devon has clearly made some steady gains and has shown itself to be a strong performer, though admittedly unremarkable. Devon also has made it a point to be active within the STACK play in Oklahoma, and this shift in its focus might be a larger reason why there has been a lack of significant improvement in the overall drilling program on its Midland acreage. Across the Midland Basin many operators have made advancements on improved EURs and IP rates since early 2012. However, Devon has not seen the significant increases in its drilled wells when compared to the top three operators (Figure 3). Concho Resources has shown the largest increase in overall EUR at about 64% from its 2014 EUR of 99 Mboe to its 2015 EUR at 162 Mboe. Unfortunately, Devon has remained steady in its EURs over the past several years at 62 Mboe in 2014 and 69 Mboe in 2015. 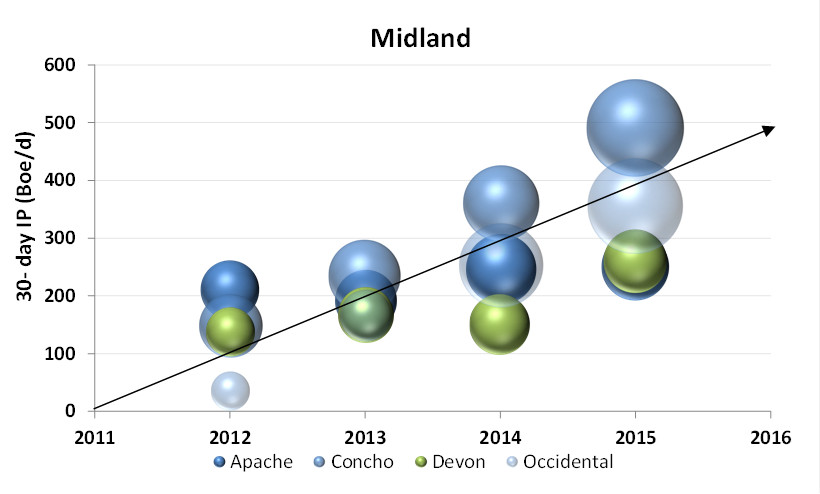 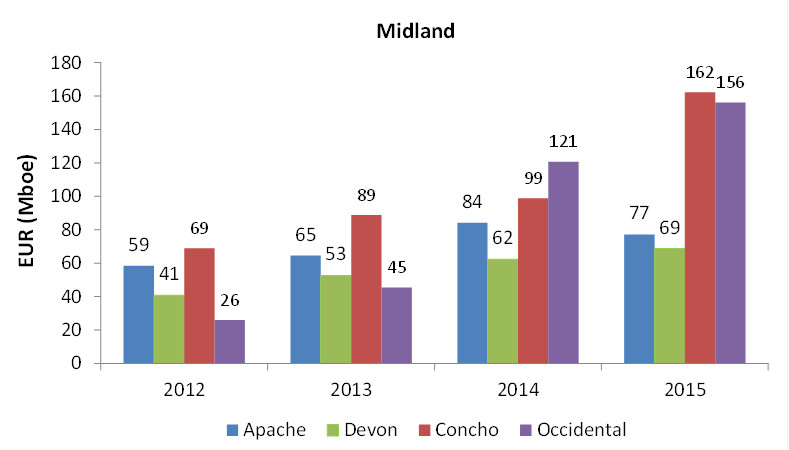 Despite the slowdown in the markets over the past several years, the Permian has not been lacking in economic acreage. The Midland Basin’s economics have provided a sort of “safe zone” for operators that are currently positioned within it, with typical breakevens below $60/bbl. In spite of these economics, the Delaware does still provide ample acreage positions and well results that will typically win over activity in the Midland. Along with these top operators, Figure 4 shows the median breakevens for the last three years in the Midland Basin. Currently, Devon shows the highest breakeven among these operators at $64/bbl in 2015, while Concho is achieving median prices of $44/bbl. Each operator listed has been able to reduce its overall breakeven target year-over-year, and in the current environment of sub-$50/bbl oil, these operators are faring quite well. 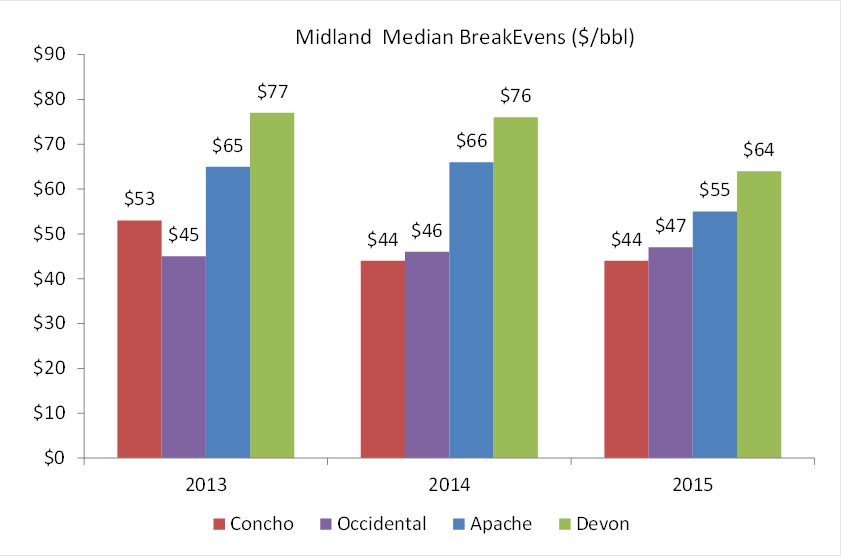 When looking at the economics of major sub-basins in the region, the Delaware shows the lowest weighted average breakeven at about $31/bbl WTI, while the Midland shows the highest, at about $45.40/bbl (Figure 5). The Eagle Ford shows a lower breakeven of $36.90/bbl, which brings it 19% lower than the Midland Basin currently and 17% higher than the Delaware. Over the past several months activity has been largely focused within the Permian Basin as operators are continuing to de-risk prime acreage locations and optimize drilling within their strongholds. The Eagle Ford has remained on the radar as having activity within its core area of Karnes and the neighboring counties; however, Stratas Advisors does not anticipate more of a focus shift to the Permian’s northern neighbor in an attempt to maximize profits until the markets rebound. Even though low oil prices remain low, Texas’s pristine basins are at the forefront of economic development for shale operators. 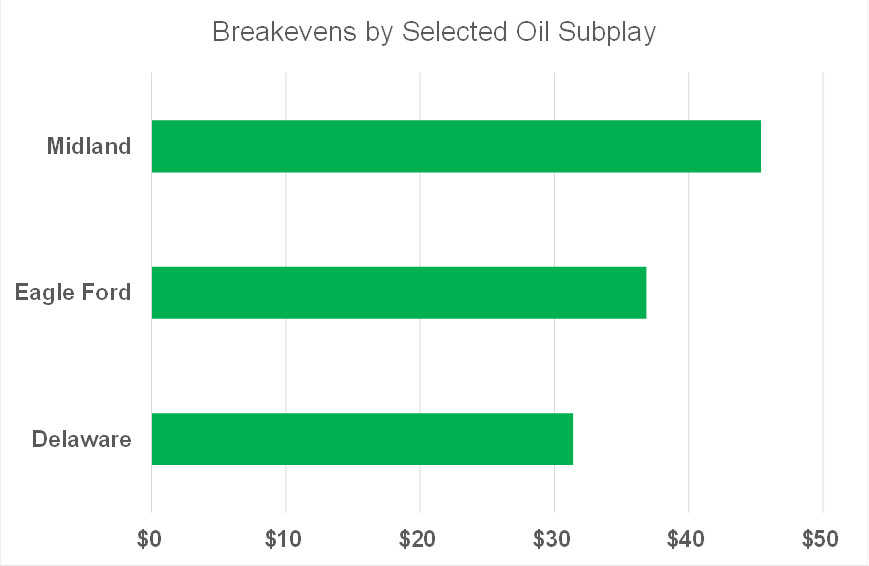