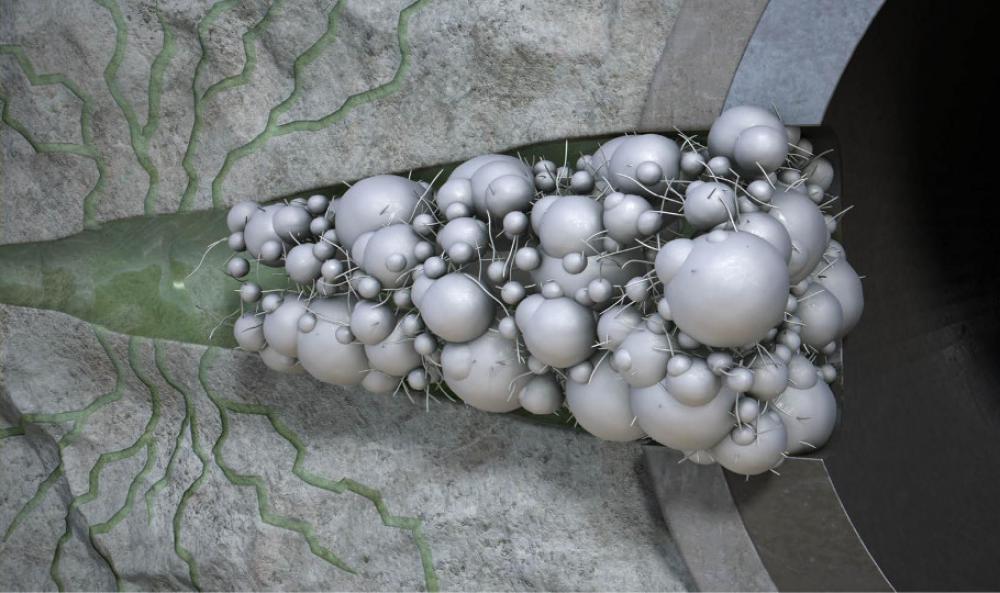 Acid stimulation, long the preferred method for boosting the flow of hydrocarbons in carbonate formations, has seen challenges when it comes to diverting the fracturing fluid into target zones. In wells with multiple clusters or perforation intervals, for example, it often is difficult to divert the stimulation fluid from one zone to another because the fluid naturally enters zones with the lowest rock stress or highest permeability.

The use of conventional diversion systems in carbonate formations can be unreliable and less than effective. Isolation techniques that use diversion material to block perforation entrance holes often do not align perfectly with the perforation and therefore do not provide reliable diversion. Other options such as rock salt and benzoic acid flakes are not dependent on perforation shape and are deemed to be more suitable for cased-hole completions. However, the high permeability of both materials often leads to fluid breakthrough.

Conventional diversion techniques, including frack diverter balls, rock salt and benzoic acid flakes, are further limited because they are not designed for openhole types of completion.

In a move that represents the industry’s most significant step change in diversion technology in several years, Schlumberger has developed a technique that more reliably diverts acid stimulation fluids into target zones, improving both reservoir contact and well productivity. The OpenPath Sequence diversion stimulation service, officially released in November 2016 and built on the success of previous fluid diversion systems, has been effectively implemented in carbonate fields in the Middle East and the Permian Basin. The service has significantly improved stimulation results and increased productivity (Figure 1). 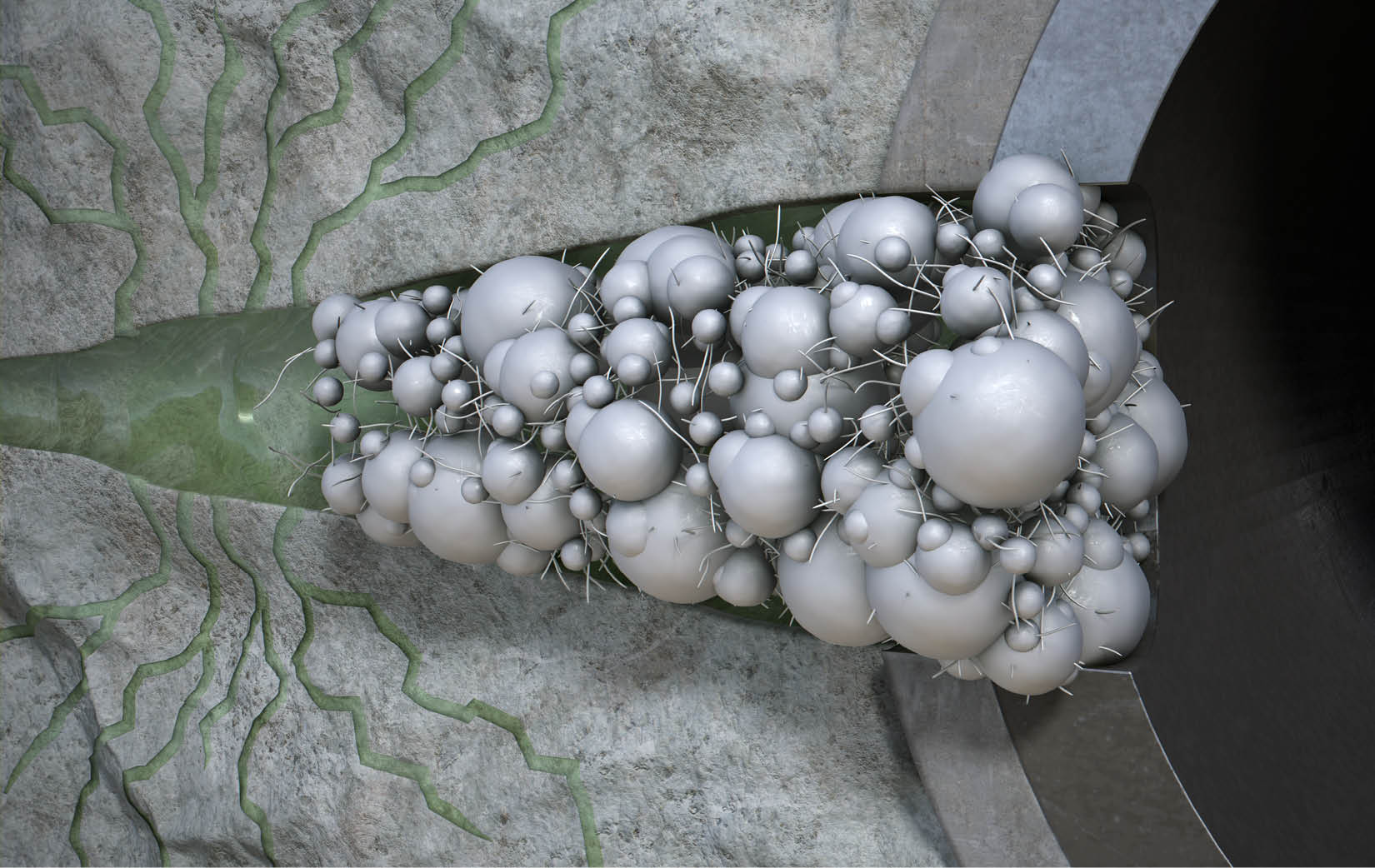 As the first member of the OpenPath stimulation services family, the new diversion stimulation service includes stimulation modeling and a proven near-wellbore diversion system. The new service sequentially stimulates multiple zones and intervals in cased-hole and openhole completions in conventional and unconventional formations. It can be deployed to selectively and temporarily plug a specific region along the wellbore or uniformly distribute fluid along the wellbore to maximize wellbore coverage.

The cornerstone of the new service is a composite pill engineered as a blend of degradable fibers and multimodal particles that temporarily block low-stress or high-permeability entry intervals to enable stimulation of new higher stress zones by diverting the acid between clusters along the wellbore. Diversion occurs in the near-wellbore area of the formation, with the largest particles forming a bridge while the smallest particles fill in the gaps between the large particles to create a very low-permeability seal. The fibers enhance composite pill bridging capacity and provide particle suspension, keeping the material intact to isolate the desired zone with optimum plugging performance.

The treatment, which deploys an acid suitable for specific reservoir conditions and completion design, effectively increases the stimulated rock volume to enhance oil and gas production. The new acid diversion stimulation technique can be used with a variety of acid systems, including an engineered acid designed specifically for the new service. Based on empirical data, diversion material can withstand differential pressure up to 4,500 psi for acid fracturing or matrix stimulations. Following treatment, the fibers and particles completely degrade within hours or days at temperatures ranging from 54 C to 149 C (130 F to 300 F) with no intervention required. This further reduces costs and HSE risks for completion operations.

The new service is especially suited for conventional and tight carbonate formations with the degree of permeability and porosity frequently found in the Middle East, where acid stimulation is very common. It was designed to provide stimulation diversion in new completions and for restimulation in mature fields.

This necessitated deploying an acid treatment that would effectively stimulate multiple perforation intervals in a continuous treatment and without mechanical isolation. To enhance production, the design and treatment called for diverting some of the acid stimulation from the upper zones of the formation to the lower reservoir zone, an endeavor that had previously been unattainable.

The OpenPath Sequence service released composite pills to provide consistent and reliable isolation plugs, with the treatment alternating between three acid stimulation stages and two diversion stages. After placement of the pills, diversion within the perforated intervals was indicated by diversion pressures of 500 psi and 1,600 psi as well as net pressure changes calculated from instantaneous shut-in pressures. Injection log data based on stationary spinner and temperature measurement provided further solid confirmation that the diversion technique had been effective.

Injection logging performed after the prejob injection and after each diversion verified that all perforation intervals had received coverage. 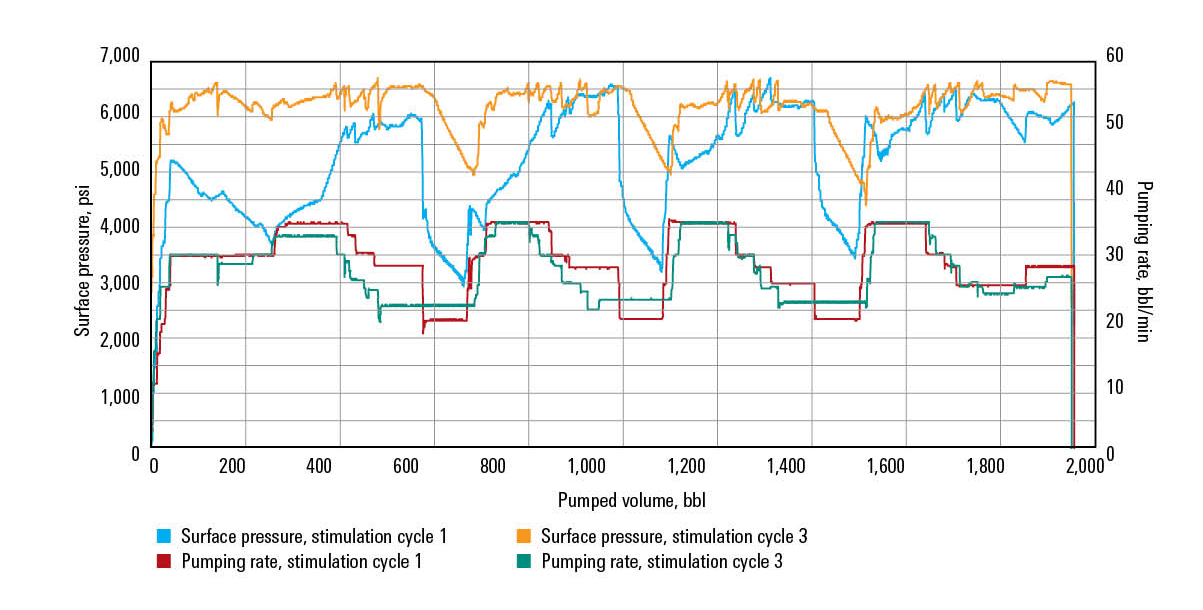 In the Permian Basin an operator used the OpenPath Sequence service to enhance diversion between multiple formation layers with varying in situ stresses and permeability. The operator needed to convert a vertical injector back to a producer well. Located in the Clearfork Shale of the San Andres play, the well had been completed with cemented production casing perforated with 756 entrance holes over an extended interval of 323 m (1,060 ft).

The multizone laminated carbonate formation with low bottomhole static temperatures ranging from 40 C to 60 C (120 F to 140 F) had been stimulated with a matrix treatment a year earlier, just before the well was converted to a water injector. Mechanical diversion methods for fracturing were not possible due to operational complexities and cost constraints. The primary objective was to maximize the number of effectively stimulated zones using acid stimulation treatments tailed with some proppant.

The five stimulation stages were completed with a consistent incremental net pressure of more than 400 psi, indicating that the fracturing fluid had been successfully diverted between the various stress zones during the treatment. Radioactive tracers further confirmed diversion between stages and also verified that 100% of the more than 305-m (1,000-ft) interval was successfully stimulated. No diversion material was observed on the surface during flowback, verifying laboratory tests indicating that the diversion materials had fully degraded even at the low formation temperatures of 38 C to 40 C (100 F to 120 F).