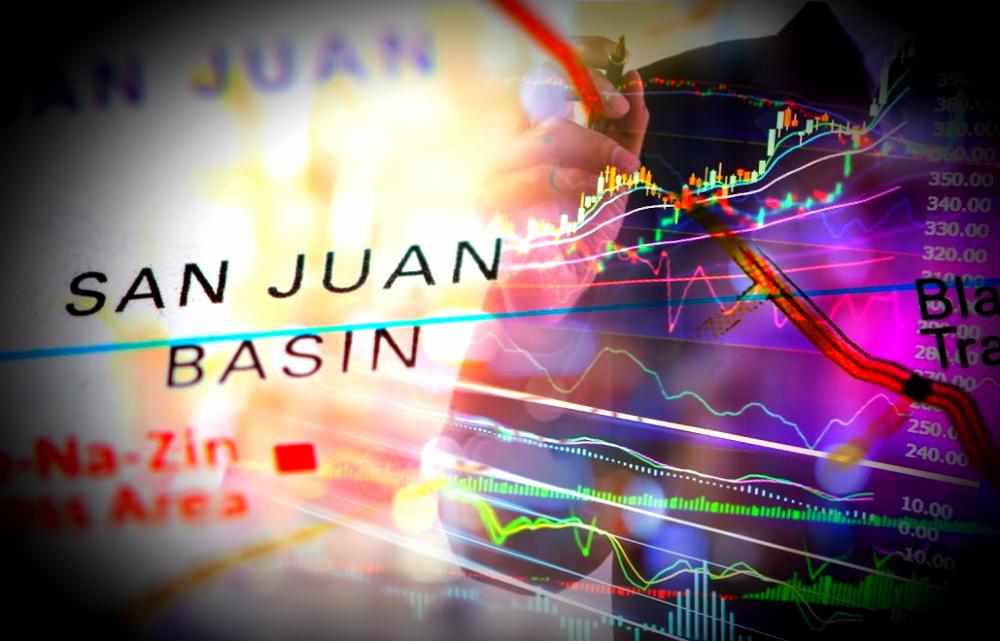 It has been a wild ride with the price of oil dropping into uncharted territories at less than $0/bbl in April of this year. These are difficult times for any operator, many have already declared bankruptcy and others are barely hanging on. It is notoriously difficult to predict the price of oil, but one can only hope that things will recover so small operators can make money again. The silver lining is that there is great opportunity right now for companies and investors who are lucky enough to have capital to spend—everything is on sale.

While we cannot know exactly how MorningStar arrived at their bid price, I will go over the basics with an emphasis on the data needed to evaluate Southland Royalty’s acreage in the San Juan Basin. This bankruptcy and sale is interesting because of Southland Royalty's extensive acreage position in a mature basin with potential geologic upside. The San Juan Basin is located in northwestern New Mexico and has historically been a major producer of coalbed methane from the Fruitland Formation (1980’s to present). The operators with highest recent production numbers in the San Juan Basin are Hilcorp Energy Co., BP Plc (BP's San Juan assets were recently acquired by IKAV), Red Willow Production Co., followed by Southland Royalty, Logos Operating, Enduring Resources and DJR Operating (Figure 1). 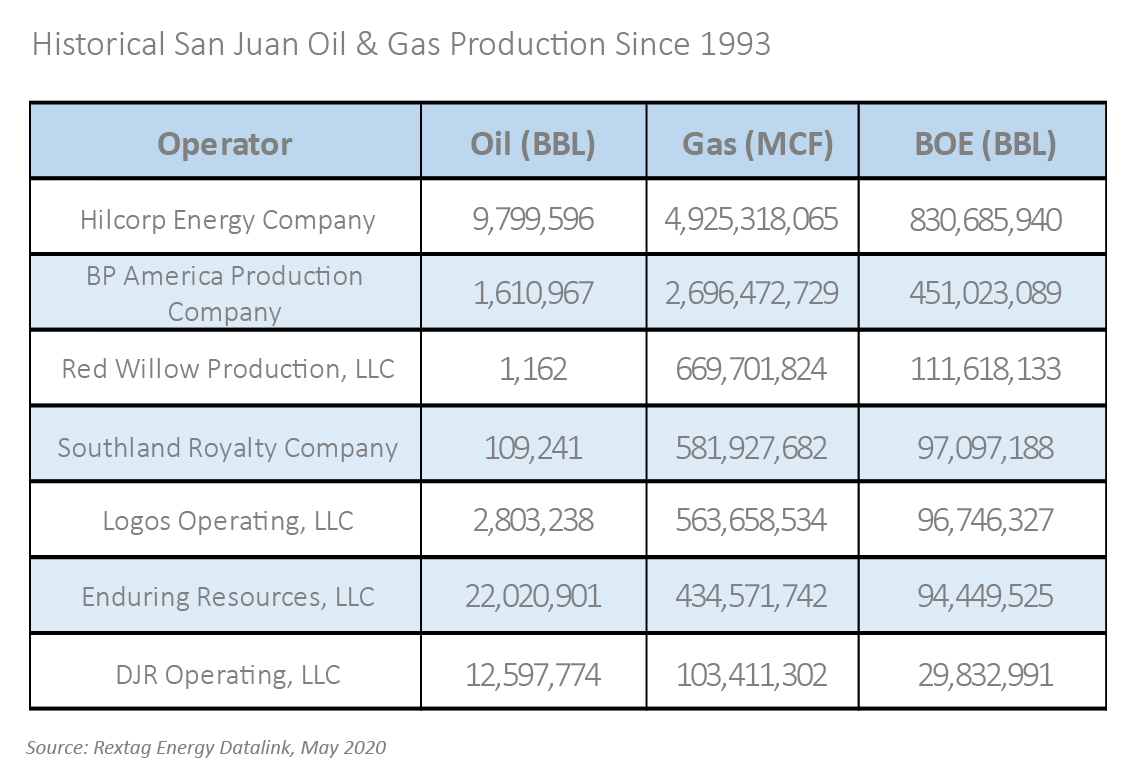 In the past seven years, the oily Cretaceous Mancos Formation has opened a slew of unconventional activity in this old gas basin (Figure 2). The Mancos Formation is about 1,000 feet thick black marine shale, with interbedded sandstones that have higher porosity (4%-10%) than the organic-rich oil sourcing shales. These tight sandstones within the Mancos have become the target for unconventional horizontal drilling in the San Juan Basin. As shown in Figure 2, total oil production in the San Juan Basin was roughly 2.5 million barrels per year in 2012. Just three years later, as operators started drilling horizontal wells in the Mancos, cumulative oil production in the San Juan Basin breached 9 million barrels per year. With three stacked lateral targets within the Mancos (the Gallup, El Vado, and Mancos Silt), operators have drilled 7,000 ft-plus horizontal wells with many successful results. 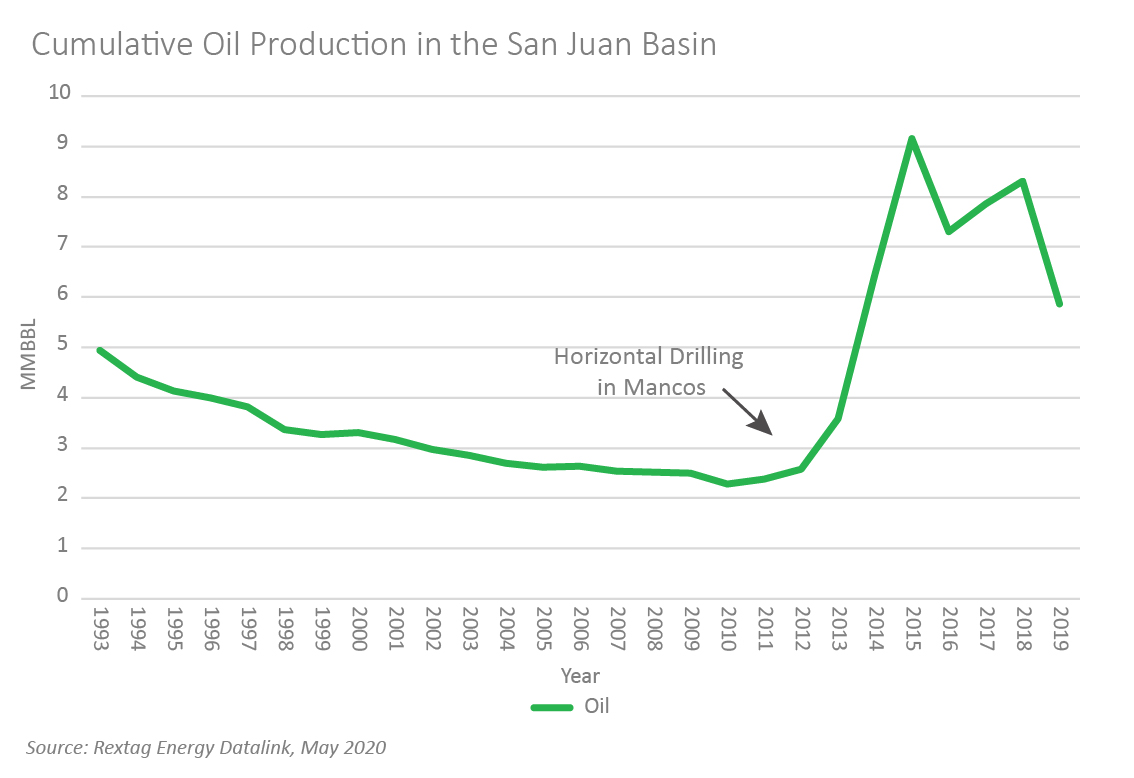 To evaluate Southland Royalty’s acreage, fast and accurate production data and acreage maps are imperative (Figure 3). Southland Royalty operates about 1,085 wells in the San Juan Basin with an average cumulative gas production of about 500,000 Mcf/month in 2019. The production is mainly gas from the Fruitland and Dakota formations. Typically, an engineering team will give value to the current production, subtract value for plugging liabilities, and then it is the geologist’s job to give value to open acreage with untapped geologic potential. 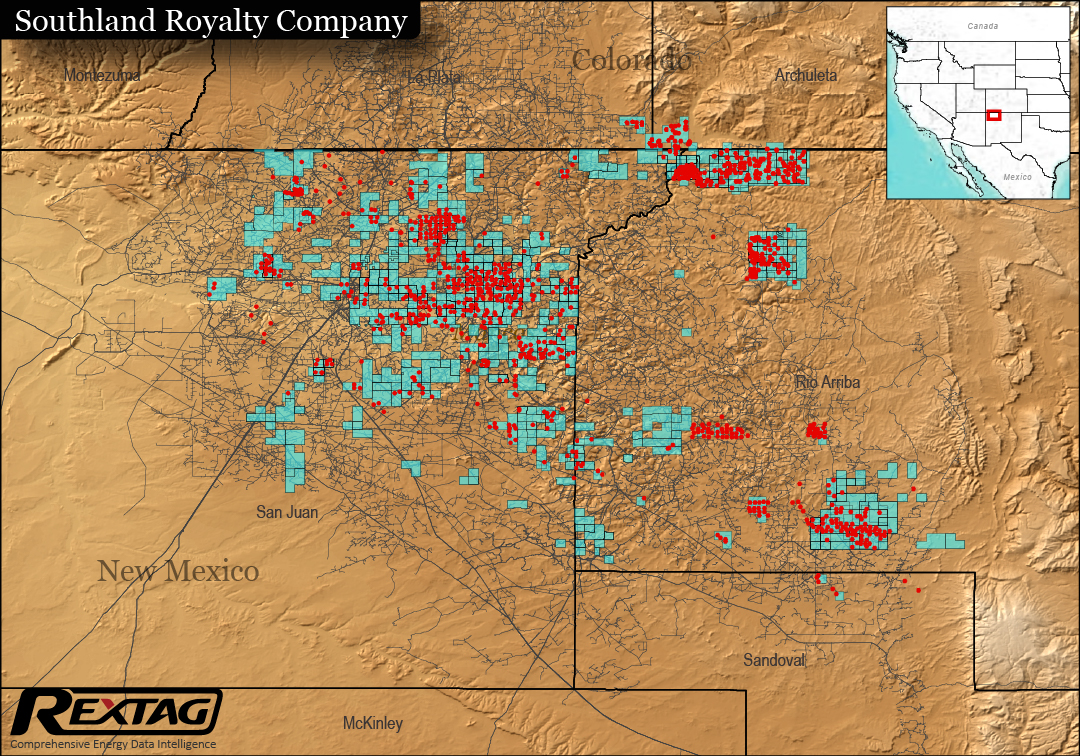 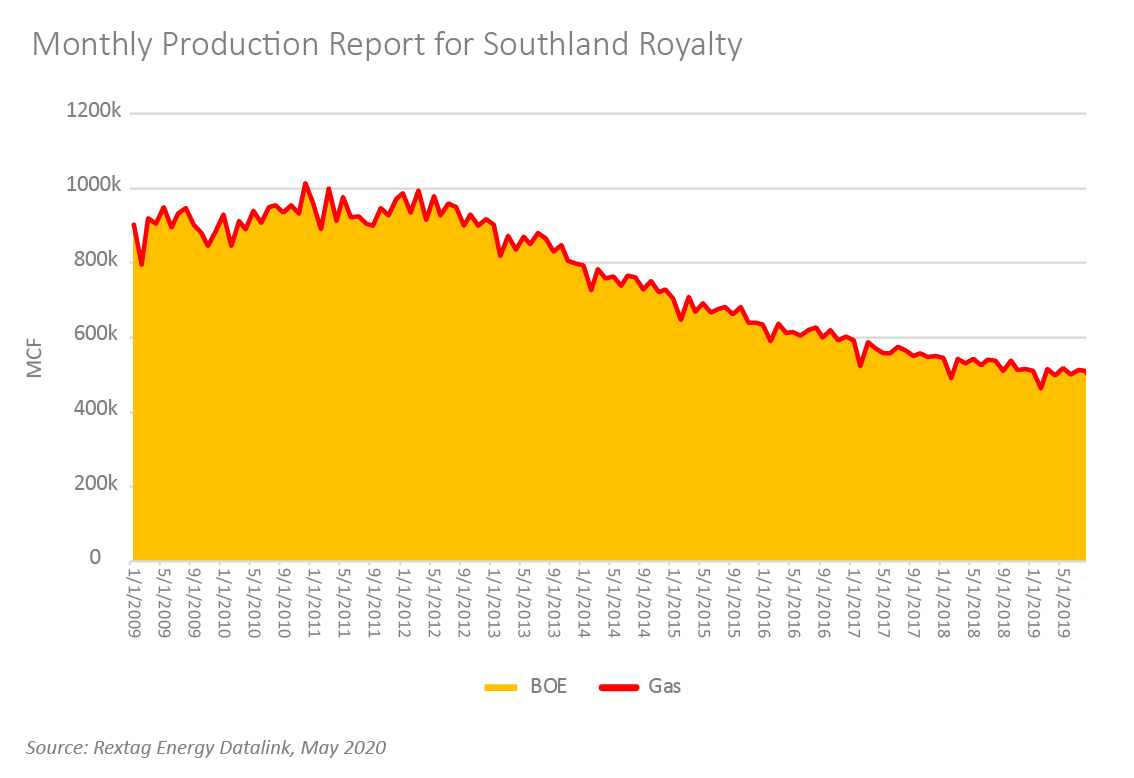 Putting a price on undrilled acreage with geologic upside is usually the factor that can vary the most when evaluating a prospect and can give a bidder the competitive advantage. The data necessary for this estimate includes well logs, geologic formation tops, structure and thickness maps, rock core to tie into petrophysical models and local geologic expertise.

Southland Royalty’s southern San Juan Basin acreage is out of the basin-center gas window and is along trend of recently drilled Mancos horizontal oil wells (Figure 4). These wells are averaging almost 400 bbl/d of oil in the first month of production (Figure 4). In this case, a buyer will at least consider the potential Mancos oil geologic upside in the acquisition process, and then decide if they want to include upside in their bid. 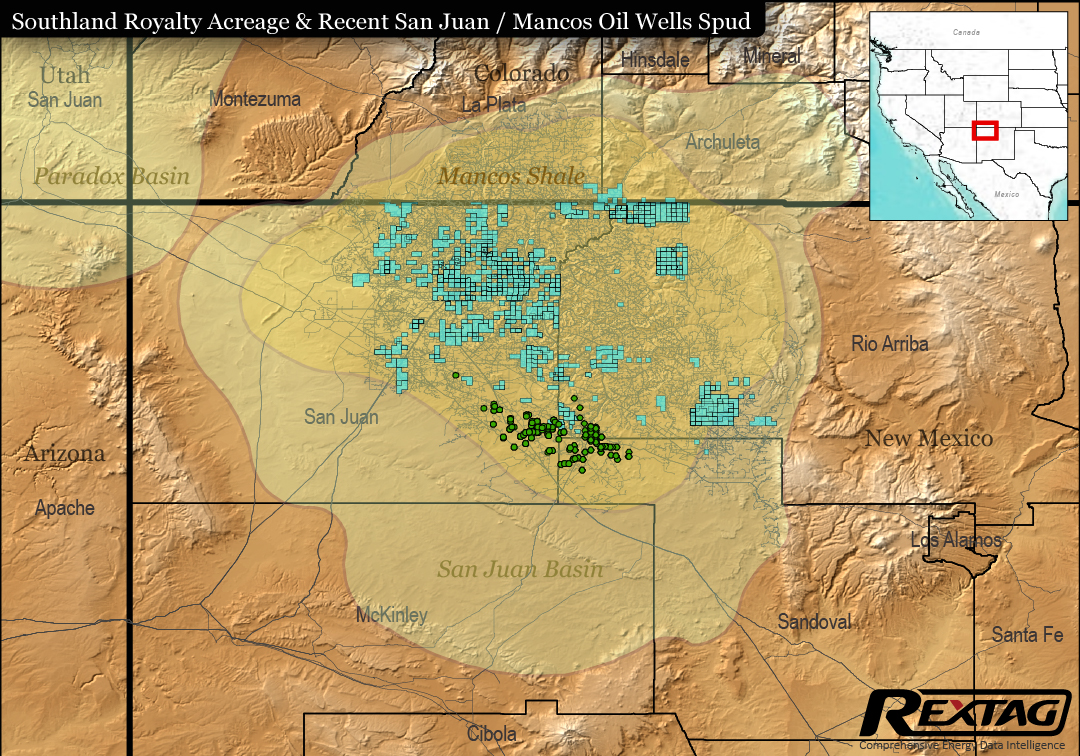 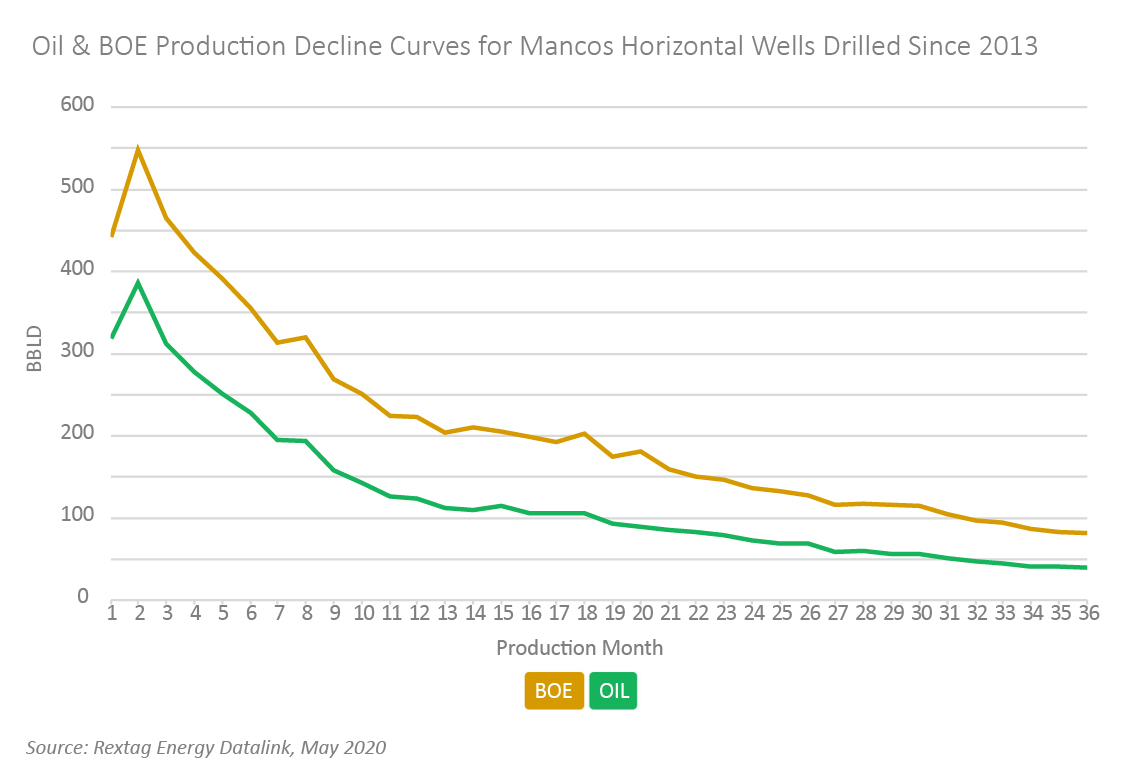 Quantifying the value of an asset is difficult to do without an experienced team, local knowledge and fast access to land, production and well data. But now, more than ever, big public datasets are becoming easy to access and manipulate. Going forward in this competitive environment, big data will be key in making good business decisions, and in the next few months there will be many other buying opportunities as distressed companies are forced to sell their assets. Happy bidding!

Sabina Kraushaar can be reached HERE.