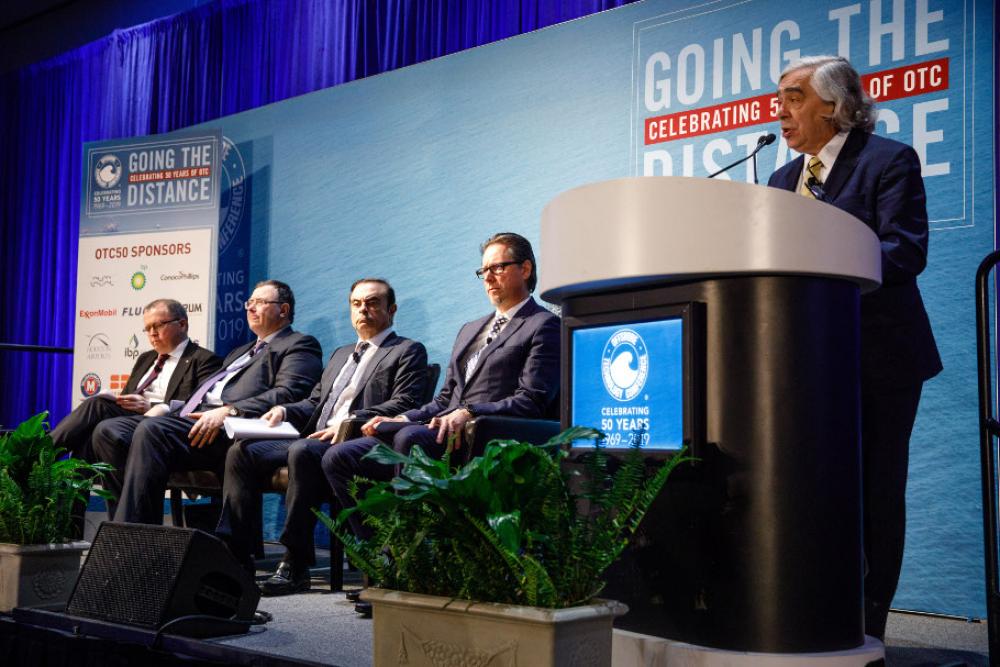 As the world turns toward a low carbon future, a panel of energy and automotive leaders agreed that natural gas will play a large role and demand for electric vehicles and batteries will rise with countries demanding cleaner fuel sources.

But they also acknowledged efforts toward keeping global temperatures below 2 C (3.6 F), as set during the 2015 Paris Agreement, which are falling short despite efforts by some companies taking part in climate change initiatives, investing in renewables and taking on carbon capture, utilization and sequestration (CCUS) projects. The world’s energy transformation was discussed during an OTC session on April 30.

“The move to a low carbon future will reshape the energy space as we know it,” Statoil CEO Eldar Sætre said. He added that the oil and gas industry could see the shift as a threat, but it should translate the so-called threat into a business opportunity. It is something that Statoil is essentially doing as a carbon-efficient producer of oil and gas, wind energy and carbon capture and storage (CCS).

Statoil aims to invest between 15% and 20% of its capex in new energy solutions by 2030. Reflecting its transition from an oil and gas company to a broad energy company, Statoil officially becomes Equinor on May 15.

Sætre called the Paris Agreement ambitious. In the end, “the industry has to do most of the job. Many people claim that producers of oil and gas can’t be part of any kind of solution…We have to be part of the transition and part of the solution,” he said.

To help reach the goal, the world must replace coal with natural gas and renewables—something that will not happen quickly, Sætre said. The industry also needs to explore a wider set of energy solutions such as further decarbonizing oil and gas via CCS and CCUS, which has become a priority for companies involved in climate change initiatives.

“In moving toward lower carbon energy demand side management, low to no carbon electricity followed by substantially greater electrification throughout the economy is certainly necessary but it is not sufficient to reach the goals,” Moniz said, adding that energy efficiency offers opportunities on the demand side. “For electricity, there are many options: renewables, nuclear, carbon capture and sequestration.”

Total CEO Patrick Pouyanné pointed out some realities. Referring to the future energy mix scenarios, he said all three scenarios through 2040 include oil and gas, but less oil will be needed than today. The opposite is true for natural gas consumption, which will grow.

He pointed out that electric vehicles will make up half of all light-duty vehicles in 2040.

Total strives to be integrated along the entire value chain—not only as an energy producer but also a supplier and downstream, even distributing gas, Pouyanné said. Total announced on April 18 a proposal to buy French utility Direct Énergie in pursuit of its development in electricity and gas generation and distribution in France and Belgium.

“Demand for electricity will grow quicker in the 21st century than the demand for energy,” Pouyanné said, noting gas and renewables are ways to produce electricity. In addition, “demand for batteries is booming like we’ve never seen. We don’t have enough production capacity today to follow the trend.”

Meanwhile, the number of electric cars sold continues to grow, especially in China where government-led action to lower emissions is driving change.

Carlos Ghosn, chairman and CEO of Renault-Nissan-Mitsubishi, said the number of electric cars it sold globally has grown from practically none in 2006 to 1.3 million in 2017, though that’s only about 1% of the 94 million or so cars sold annually.

Electric cars will make up 35% of major markets (Japan, Europe, China and the U.S.) and 25% of the global market by 2030, Ghosn said. He added that many government officials already have set dates to eliminate diesel and combustion engine use in their regions

“Without any doubt, electric cars are going to become one of the most important segments of transportation,” with the cost of ownership falling below that of an internal combustion engine by 2022-2023 without government incentives as technologies improve driving distances, motor costs and infrastructure costs, Ghosn said.

Change is also on the horizon offshore, where DNV GL CEO Remi Eriksen said more energy will come from offshore wind than from offshore oil by 2050. By the same year, DNV GL forecasts renewables will make up about 50% of the world’s primary energy demand.

“The onward march of renewables seems unstoppable,” even with the cost of storage, Eriksen said. Electricity also is going to be the dominant energy carrier by 2050, doubling to 40% of energy demand from today, he added.

Gas becomes the single biggest energy source by about 2034, overtaking oil before falling back to levels seen today, Eriksen said. Natural gas should be seen as a longterm energy source amid the renewables excitement given its role in the greening of the energy mix, role of hydrogen and its symbiotic relationship with renewables, he added.

However, “even with the massive and rapid uptake of renewables in our forecast it is falling short of the Paris Agreement … We don’t see any silver bullet here,” Eriksen said, suggesting it will take a combination of actions to reach the goal such as CCS, carbon price, breakthrough energy efficiency and more renewables. “The combined power of the oil and gas industry and the automotive industry will certainly help drive the energy transition forward.”