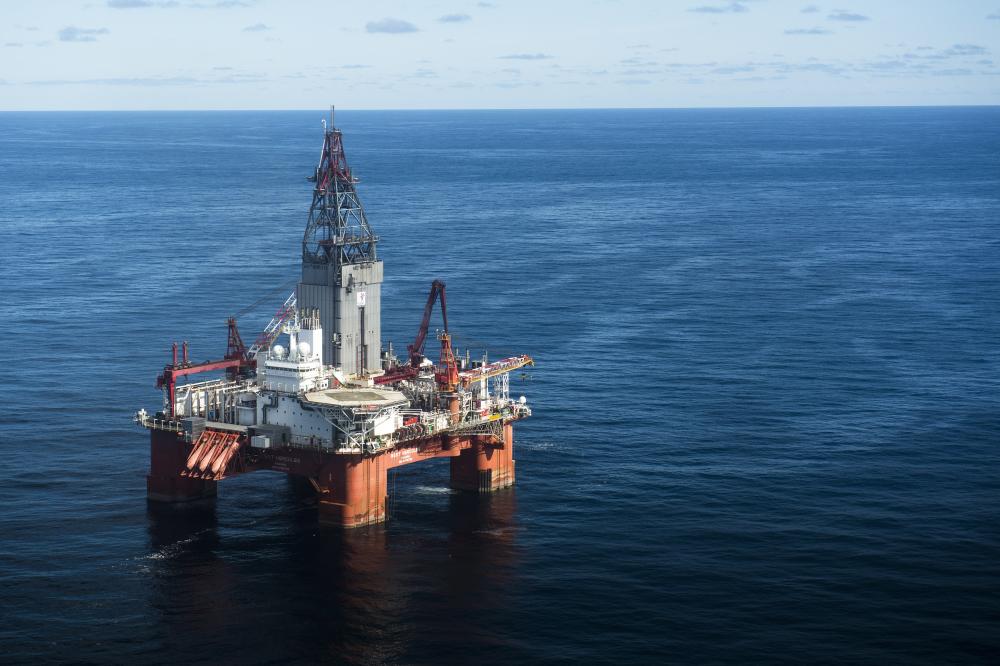 Seadrill’s West Hercules semisubmersible unit, pictured drilling in calm waters in the Barents Sea during happier higher oil price times in 2013, had its contract with Statoil terminated early in May 2016. The unit is moored in a Norwegian fjord and available, but the market for floaters and jackups is expected to bottom out in early 2017 before starting its expected cautious recovery. (Photo by Ole Jørgen Bratland, courtesy of Statoil)

The near-term outlook for offshore drilling remains challenged, with activity likely to stay depressed throughout 2018. Due to the longer cycle times for offshore projects, a recovery in the offshore rig market is likely to lag any improvement in oil price.

It has been more than two years since the Brent oil price fell below $100/bbl in September 2014, and the commodity cycle now looks to have passed its low point, with prices recovering somewhat. In that time the industry has witnessed a major decline in global drilling activity, with exploration and development capex falling by 40% from 2014 to 2016, leading to extensive project delays and cancellations.

The impact on rig activity has been substantial, with the most recent Baker Hughes rig count showing the total number of onshore rigs worldwide falling from 3,206 in September 2014 to only 1,340 in September 2016—a decline of almost 60%.

As prices recover, the onshore rig fleet is expected to show faster recovery and is in fact already starting to do so.

The larger decline in the onshore rig fleet reflects a quicker response to price movements due to shorter contract durations and project lead times. As prices recover, the fleet is expected to show faster recovery and is in fact already starting to do so. With Brent floating about $50/bbl on the back of OPEC signaling a tentative willingness to restrain output, onshore rig counts appear to be on the road to recovery. According to Baker Hughes, the U.S. onshore rig count rose from a low of 380 in May 2016 to well over 500 in September.

In contrast, the offshore rig fleet is still experiencing significant declines. Since the beginning of the year contracted rig counts have fallen steadily, with 44 fewer jackups and 51 fewer floaters under contract in third-quarter 2016 vs. fourth-quarter 2015. At the same time, older rigs are being retired at a record pace, with 21 floaters and 15 jackups taken out of service this year up to the end of September.

The number of new contracts signed, including extensions, also continues to remain at historically low levels. Between the beginning of 2016 and the end of the third quarter, 41 new floater and 80 jackup contracts were signed. Extrapolating this for the full year would give a run rate of 55 for floaters and 107 for jackups, which is substantially lower than the 94 and 186 contracts, respectively, signed in 2014.

As a result, the day rates for offshore rigs continue to remain depressed. Day rates have declined about 50% on average for new contracts between first-quarter 2014 and third-quarter 2016. 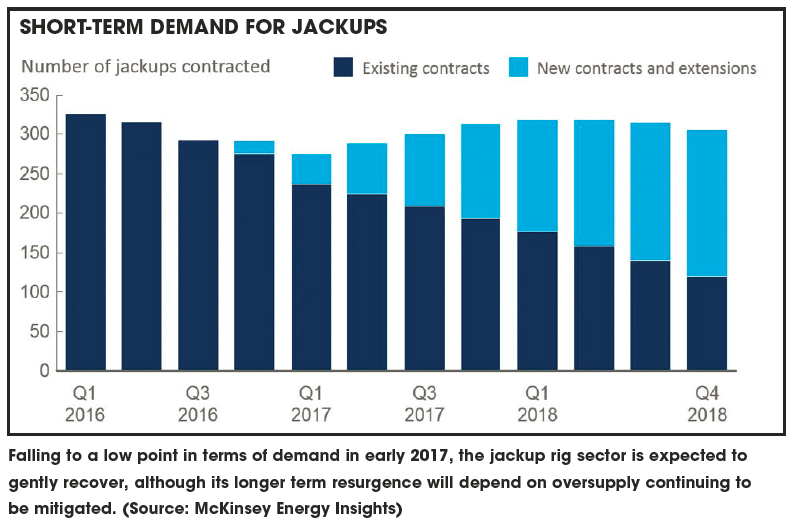 Given this poor performance in the market, rig owners have gone to great lengths to reposition themselves to survive low margins until the commodity upcycle brings a hoped-for recovery in activity.

Measures taken include aggressive cost-cutting initiatives on both operational and overhead costs across the board as well as concerted action to ensure rigs remain active as long as possible, with “blend and extend” contracts becoming increasingly common. Under these agreements immediate day rate reductions are granted to the operator in exchange for extensions to the contract. This reduces costs for operators, while rig owners can ensure their assets remain active for longer.

In the most extreme cases, bankruptcies have been used to either restructure debt (e.g., Vantage Drilling) or wind up companies altogether, as was the case with Hercules Offshore.

While the current offshore drilling market is challenging, there are increasing indications that this might be as bad as it gets, with the sector reaching the low point of the cycle. OPEC is increasingly signaling its willingness to curtail production, and prices have slowly crept up in recent months.

Looking forward, McKinsey sees significant uncertainty in the market. While the possibility exists for a prolonged period of depressed prices or, conversely, a jump toward $90+/bbl should potential market disruptions occur, the most likely outcome over the next several years is expected to be a recovery to a “new normal” of $65 to $75/bbl. McKinsey estimates this to be the price band for which sufficient new offshore and shale capacity becomes economic considering the current deflation in service and equipment costs.

Assuming OPEC acts to maintain market share and grow production with the market, McKinsey would expect supply and demand to balance by mid-2017 followed by a steady recovery in price through year-end 2018. Under this “slow recovery” scenario, McKinsey anticipates relatively flat production in shallow water along with small gains in deepwater production, amounting to about 700,000 bbl/d by 2020.

Taking into account oil supply/demand dynamics and recent contracting activity under a “slow recovery” scenario, McKinsey expects the offshore drilling market to reach the bottom of its cycle in first-half 2017, after which it will stabilize with modest gains through yearend 2018.

In the case of jackups, the number of active rigs is projected to decline from 293 in third-quarter 2016 to 276 in first-quarter 2017, followed by a recovery to 306 active rigs by year-end 2018. Of the rigs active in fourth-quarter 2018, only about 40% are currently contracted. From a supply perspective, both continued deferral of newbuild jackups and increased levels of retirement are expected. Only 37 newbuild deliveries are anticipated, with 32 rigs likely to be retired between 2017 and 2018. 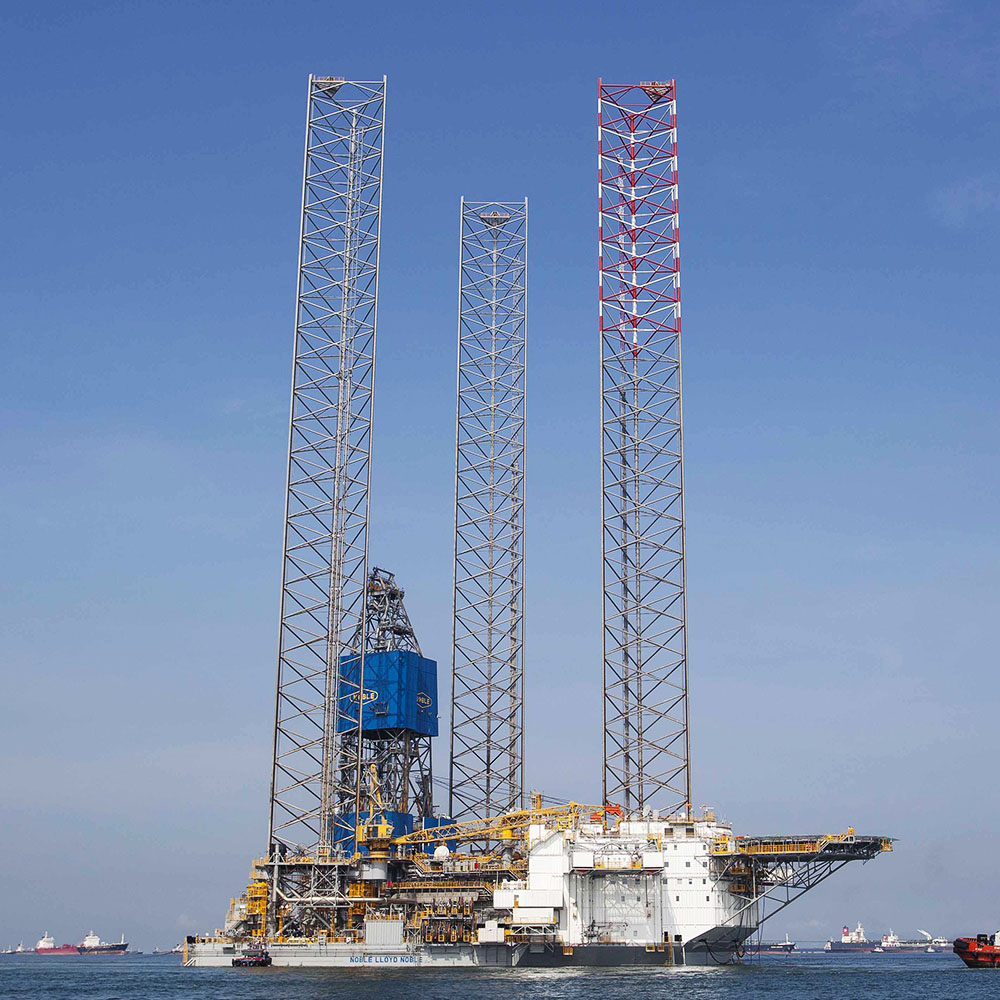 A rare highlight for the offshore rig market, Noble Corp.’s high-specification newbuild Noble Lloyd Noble is the world’s largest jackup. The harsh-environment unit was delivered from the Sembcorp Marine yard this summer and will start work before year-end 2016 on a four-year, $447,000/day contract, initially predrilling wells on the Mariner Field in the U.K. North Sea. (Source: Noble Corp.)

The number of active floaters also is projected to reach its lowest point in first-quarter 2017 as the count drops to 146 from 163 in third-quarter 2016, although this is then forecast to increase to 178 by year-end 2018. Of the floaters active in fourth-quarter 2018, only about 40% are currently contracted. Supply will still be roughly flat, with 29 new projected deliveries in 2017 to 2018 compared to 26 retirements.

Full recovery of both categories will take significantly longer as offshore activity slowly reacts to any oil price recovery. Particularly in the jackup fleet, the rig oversupply situation is mitigated. Utilization levels are not projected to return to above 80% until the early 2020s for both floaters and jackups, suggesting day rates might remain depressed for some time to come. 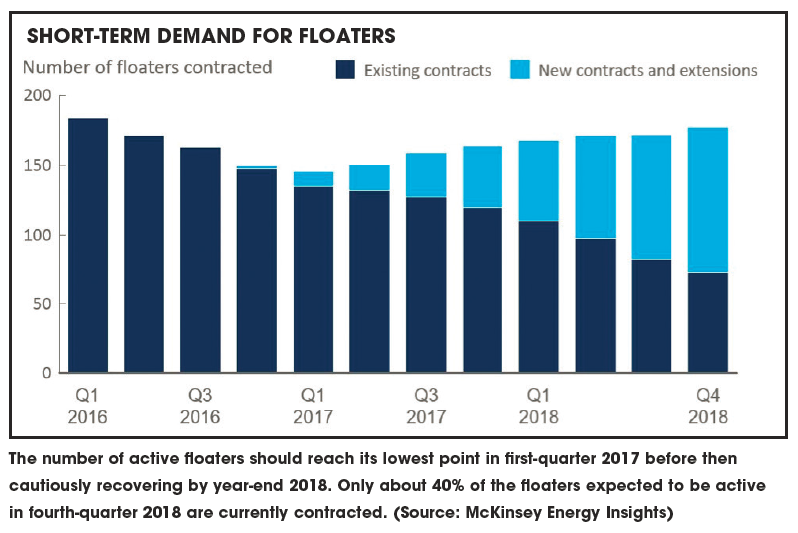 Editor’s Note: The author thanks Jeremy Bowden for his contribution to this article.