Energy-rich Brazil and Argentina offer an abundance of opportunities across the entire energy value chain but not for the faint of heart investor.

Energy investors can have a difficult time navigating the region due to political, economic and financial uncertainties that existed prior to the pandemic and Ukraine war and have been exacerbated in the aftermath. The Brazilian and Argentine governments are actively pursuing energy investors to expand a gambit of projects as presidential elections loom in both countries this year and next.

In terms of M&A, the most investments have been seen in Brazil, with individual deals reaching almost $2.3 billion, Welligence Energy Analytics research analyst Omar Rios told Hart Energy, adding that activity elsewhere is and likely will remain quiet over the remainder of the year.

“Earlier this year, we did see a stubborn buyer-seller gap holding back activity that was caused by the volatile commodity price environment after the Russia-Ukraine crisis. We see this trend holding as macro-economic headwinds and political uncertainty have been added to the mix,” Rios said.

Brazil, home to the famed pre-salt, offers offshore E&P and infrastructure projects while Argentina’s unconventional shale offers the best opportunities to boost production and infrastructure amid the country’s aspirations to join the LNG exporting club of countries. But, the opportunities in the two Southern Cone countries don’t stop there and span from fossil fuels, to clean, low carbon options aligned with the global energy transition, such as wind, solar and hydrogen.

Brazil’s momentum as a pre-salt exploration hotspot has slowed in recent years compared to Guyana’s prolific Stabroek Block, but state-owned Petrobras still looks to bring on 14 FPSO units between 2023-2026 to produce earlier finds. Argentina state-owned YPF continues to confront infrastructure headwinds but continues its push to assist the country achieve LNG export glory. Combined, the countries offer investors these opportunities and others far beyond.

Both countries already boast the presence of global energy sector heavy weights from Chevron, CNOOC, Equinor, ExxonMobil, Petronas, QatarEnergy, Shell and TotalEnergies, while others are still being pursued globally.

Brazil: More Than the Pre-salt

Brazil, home to the largest country, population and economy in Latin America, is abound with investment options for investors looking to chase opportunities in unregulated projects, the electric or refining sectors, natural gas infrastructure build outs and distributed generation, among others. Investments over the near term are forecast to easily surpass $50 billion across various sectors despite the political and economic uncertainties related to presidential elections in October 2022, which will pit right-wing current president Jair Bolsonaro versus former president and leftist candidate Luiz Ignacio da Silva, also known as “Lula.”

“The investment size isn’t expected to change much if Lula wins reelection, as investors believe he might bring certainty in the sense that he is more predictable in terms what he will do compared to what Bolsonaro does,” Americas Market Intelligence (AMI) Energy Practice co-director Arthur Deakin told Hart Energy. “A lot of the investments are because of policies that are in place and that will not change so that will continue to drive investments.

Between 2022 and 2026, approximately 83% of generation projects under construction in Brazil will be unregulated, representing $30 billion in investments, Deakin wrote in a recent report co-authored with fellow AMI Energy Practice co-director John Price.

Other attractive investment options relate to privatization of Brazil’s state-owned companies as currently stipulated by Bolsonaro. These opportunities offer investors a chance to pick up assets across the electric, upstream, midstream and downstream sectors.

A Bolsonaro reelection would see Brazil continue to advance the privatization of state-owned assets, such as Eletrobras and Petrobras, while a Lula victory could see the processes come to a halt due to the processes’ perceived threat to Brazil’s sovereignty and energy security, Deakin said.

Fundamental to improving Brazil’s electric sector is the privatization of the country’s largest power utility Eletrobras. The entire privatization process could raise upwards to $17.7 billion including the primary share offering, concession feeds and the potential divestment of remaining shares, AMI said. Eletrobras controls 31% of Brazil’s installed generation capacity and 47% of its transmission lines while the federal government retains a 51% interest in the company’s ordinary shares, which include voting rights. Bolsonaro aims to dilute the government’s stake in Eletrobras to around 45%, according to AMI.

Ownership in oil producer Petrobras is also dominated by the government, which holds 50.26% of its voting shares, according to the company’s annual report. Petrobras’ strategy to focus on the pre-salt remains that and despite an almost constant churn at the helm under Bolsonaro’s watch due to disagreements over fuel pricing. But what remains constant is the company’s plan to divest non-strategic assets onshore and offshore as well as refineries.

A recent drought highlighted the energy risks related to Brazil’s over reliance on hydroelectric generation, which accounted for almost 66% of the country’s installed capacity in late 2020 of 108 GW. As a result of severe weather conditions and the energy transition, Brazil’s energy generation from wind, gas and solar is expected to rise in the future as well as from other energy sources such as hydrogen as reliance on hydro falls. A bill passed in December 2021 that extended the current distributed generation subsidies for existing projects through 2045 is expected to generate 8 GW of installed capacity in a single year compared to a similar installed capacity added from 2012 to 2021 with investments of $3.5 billion.

Argentina is home to the second largest economy in South America as well as the Vaca Muerta formation, the most developed unconventional play in the Americas outside of the U.S., according to the U.S. Energy Information Administration (EIA). The formation in particular offers investors opportunities to boost shale production and to expand pipeline infrastructure while other opportunities exist onshore and offshore and across renewable and decarbonization projects despite ongoing political and economic uncertainties.

All the major companies want to keep a foot in Argentina because the Vaca Muerta is too important a resource to not have a presence in, Baker Institute for Public Policy’s Political Science Fellow Mark P. Jones told Hart Energy.

“The difficulty has simple been the Argentine government creating so much above ground chaos and risk that the companies either are reluctant to make deeper investments that might cause them to have fixed assets that could make them vulnerable to implicit or explicit expropriation or to make investments where they don’t have the ability to get their product, that is oil and natural gas, to a foreign market where they can get a real return on their investment,” Jones said.

Argentina’s President Alberto Fernandez is taking strategic decisions regarding public policies to encourage investments to mature the country into a reliable and consistent LNG exporter, energy secretariat Flavia Royon said Sept. 6 during her participation in the AmCham Energy Forum in Buenos Aires.

“Work is being done with the private sector to analyze the best investment, production and marketing schemes for natural gas, while contemplating the construction of new high voltage lines that will allow the incorporation of more renewables into the system,” she said.

A proper legal framework is also necessary, Royon added, reiterating that Argentina’s Economy Minister Sergio Massa was seeking measures to “provide predictability and legal certainty while establishing fiscal order, normalization of subsidies and incorporation of energy efficiency for the long-term sustainability of the country’s energy system.”

In order for Argentina to become a large gas exporter, Vaca Muerta needs to emulate the success of the Permian Basin, which entails lowering operational costs and accelerating project development while boosting production.

Argentina’s “Plan Gas 4” aims to incentivize companies to boost investments in the formation to boost production. A three-year plan includes $5.1 billion in gas subsidies, investments of $1.8 billion from state owned YPF and a tender scheme where gas producers can sell gas up to a price of $3.70/MMBtu.

“The difference between the market price and price awarded at the auction is subsidized by government, which leads to guaranteed returns for the companies,” according to AMI.

The proposed activities and investments are part of Argentina’s energy transition to cleaner resources such as wind and hydrogen as the government seeks favorable investment conditions to achieve energy self-sufficiency and reliable generation, energy under-secretariat Santiago Yanotti said during the AmCham Energy Forum.

The Inter-American Development Bank (IDB) recently backed a $1.14 billion conditional line of credit for investments to assist Argentina decarbonize its energy sector. Additional financing from the French Development Agency and the European Investment Bank will assist Argentina reduce its greenhouse gas emissions while expanding and upgrading its power grid. The lending prioritizes projects that reduce emissions “by expanding transmission capacity for renewable energy, reducing technical losses and decommissioning diesel-fired power plants,” the IDB said in July in a press release.

Despite the opportunities, Argentina remains under pressure from multilateral lenders such as the International Monetary Fund that stipulate fiscal austerity and social and economic changes. Rising fuel and energy prices and double-digit inflation will test public support amid a default threat that always looms large over the government.

Under the crunch, Fernandez has extended an invitation to China to invest around $30 billion in sectors from energy to commerce. Expansion of the Presidente Néstor Kirchner Gas Pipeline will increase gas production from the Neuquén Basin and enable the transport of gas production to Argentina's main consumption centers. Additional work envisioned will allow the Kirchner pipeline to reach external markets and have a positive impact on foreign currency savings while creating opportunities to monetize the country’s resources, Royon said.

2022-11-18 - Swedish and Danish authorities are investigating four holes in the Nord Stream 1 and 2 pipelines that link Russia and Germany via the Baltic Sea and have become a flashpoint in the Ukraine crisis as gas supplies in Europe run short. 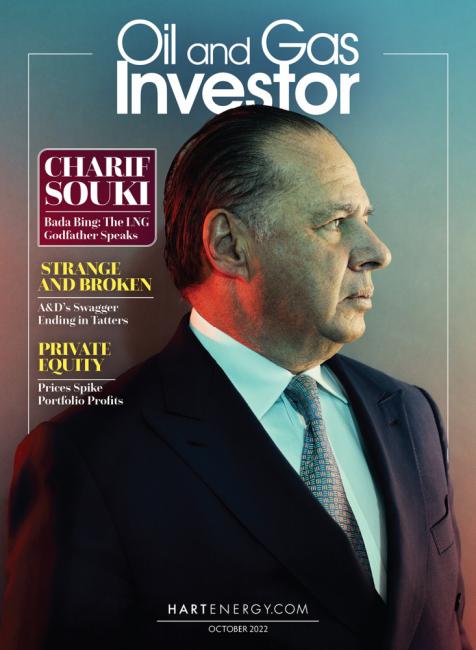