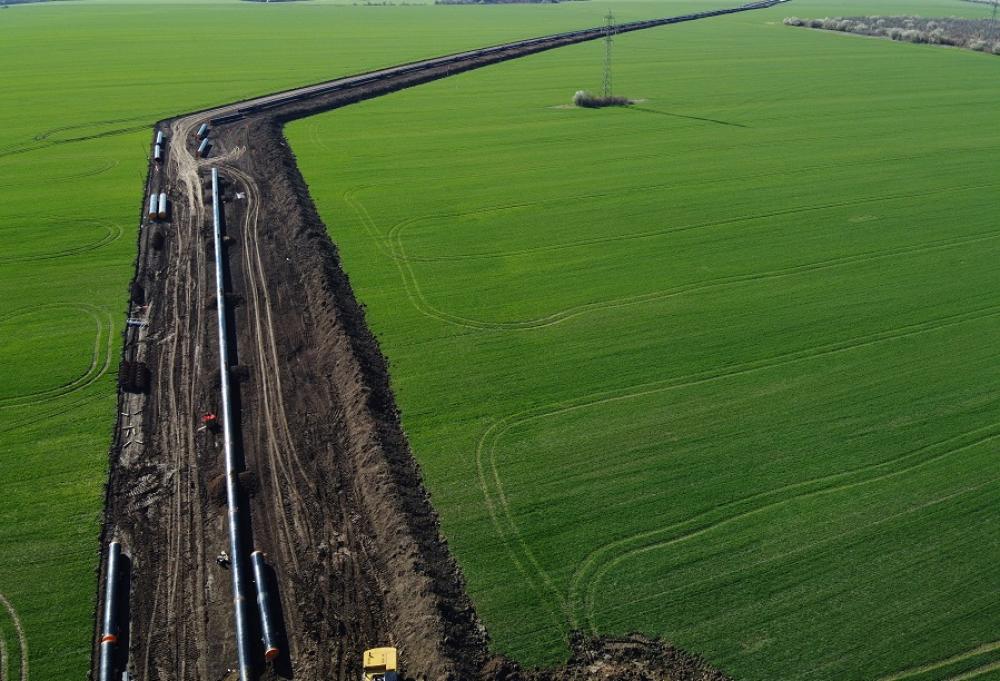 The company is moving forward with a number of project expansions, including the Permian Highway Pipeline and Evangeline Pass.

KMI Leadership is also shuffling its leadership team. KMI president Kim Dang will transition into the top leadership slot as longtime CEO Steve Kean, who will remain on the board, leaves the post effective Aug. 1. In other moves, Tom Martin will become president of KMI and Sital Mody will be president of the company’s natural gas group.

Kean and Dang have both been at Kinder Morgan for about 20 years.

“The board and I have great faith in Kim Dang, who will transition from her present role as president into the CEO slot, and then Tom Martin, who will succeed her as president,” Kinder Morgan executive chairman Richard D. Kinder said on a Jan. 18 earnings call.

KMI closed out the year with EBITDA of $1.95 billion, a “modest beat (~2% vs Street/TPH), as significantly better than expected natural gas segment earnings offset softer results across the balance of the business,” Tudor, Pickering, Holt & Co. (TPH) analyst Colton Bean said in a Jan. 19 report.

KMI’s board of directors approved a cash dividend of $0.2775 per share for the fourth quarter and authorized a $1 billion share repurchase program. The infrastructure giant reported fourth-quarter net income of $670 million and distributable cash flow of $1.21 billion—both up compared to the same period in 2021. KMI’s adjusted earnings were $708 million for the quarter compared to $609 million in fourth-quarter 2021.

“Looking ahead to 2023, [management’s] commentary was consistent with guidance provided in December while the share repurchase authorization saw an increase to $3 billion (previously $2 billion) despite very little buyback activity following the Q3 update,” Bean wrote. “No shift was indicated on the broader capital return strategy however as management reiterated existing leverage capacity though acknowledged a cautious approach to adding debt to enhance equity returns as excess FCF [free cash flow] is limited.”

Bean said growth remains on the company’s agenda as its aggregate backlog increased to $3.3 billion — $2.7 billion as of Q3 — with KMI touting a 3.4x EBITDA investment multiple across the portfolio.

The backlog includes KMI’s first carbon capture and storage (CCS) project in the Red Cedar joint venture, which will see 0.4 million tonnes per annum captured from natural gas treating plants in Colorado and transported on the existing Cortez pipeline for sequestration, Bean said.

“We expect a relatively muted equity reaction today [Jan. 19] despite the Q4 beat given lower ratability of natural gas marketing opportunities and consistent 2023 commentary as attention now shifts to next week’s Investor Day, where the focus is likely to be on high-return opportunities within the recently upsized backlog,” he said.

Kinder said the company closed out the year with a strong quarter.

“We generated robust earnings and strong coverage of this quarter’s dividend,” he said. “Company shareholders continue to benefit from our capital-efficient business model that delivers on our time-tested goals: maintain a strong investment-grade balance sheet, internally fund expansion opportunities, pay an attractive and growing dividend and further reward our shareholders by repurchasing our shares on an opportunistic basis.”

In the Permian Basin, KMI reported that land acquisition and the procurement of materials and construction contractors continues to progress as planned for the PHP expansion.

PHP’s capacity will expand by approximately 550 MMcf/d, increasing natural gas deliveries from the Permian to U.S. Gulf Coast markets. The targeted in-service date for the project is Nov. 1. PHP is jointly owned by subsidiaries of KMI, Kinetik Holdings Inc. and Exxon Mobil Corp., with KMI as the operator.

The PHP expansion will provide an outlet for increased natural gas production from the Permian Basin to growing market areas along the U.S. Gulf Coast, including new LNG facilities that will be in service in the next few years, KMI has said. The project will primarily involve additional compression on PHP to increase natural gas deliveries from the Waha area to multiple mainline connections, Katy, Texas, and various Gulf Coast markets.

Additional new compression locations on PHP are proposed for Upton, Schleicher, Kimble and Caldwell counties in Texas. The project will include modifications to the existing compressor facility in Pecos County, Texas.

KMI’s TGP — an 11,760-mile natural gas pipeline that runs from the northeast U.S. to the Louisiana and Texas Gulf Coast — has started construction on two of the three compressor stations involved in its approximately $263 million East 300 Upgrade project. TGP expects to file permits with the Federal Energy Regulatory Commission (FERC) for the remaining compressor station in first-quarter 2023.

TGP has entered into a long-term, binding agreement with Con Edison to provide approximately 115 MMcf/d of capacity to its distribution system. The expansion project involves upgrading and adding compression facilities on TGP’s system. Pending receipt of all required permits, the project has an expected in-service date of Nov. 1, 2023.

The two-phase project includes modifications and enhancements to portions of the TGP and Southern Natural Gas systems in Mississippi and Louisiana. The project will enable the delivery of the full FERC-certificated project volumes to Venture Global LNG’s proposed Plaquemines LNG facility. Pending the receipt of all required permits, the expected in-service dates will be aligned with Venture Global’s in-service dates.

KMI also said that on Jan. 13 a bankruptcy court confirmed a plan of reorganization for Ruby Pipeline LLC. The reorganization which involves payment of Ruby’s outstanding senior notes with the proceeds from the sale of Ruby to Tallgrass.

On Dec. 16, Tallgrass said it would purchase bankrupt Ruby Pipeline LLC for $282.5 million. Tallgrass beat out a $276 million bid by EP Ruby LLC, a KMI entity, according to court documents. EP Ruby also served as the auction’s stalking horse bidder with an initial offer of $236 million.

Tallgrass said the acquisition of Ruby Pipeline will provide access to established markets with an additional 1.5 Bcf/d of natural gas capacity to its portfolio and would provide “immediate and strong cash flow to the company.”

KMI’s payment to the bankruptcy estate, net of payments it received in respect of a long-term subordinated note receivable from Ruby, was approximately $28.5 million, Bean said.

KMI additionally said on Jan. 18 that it will convert its Autumn Hills facility, which was part of the $135 million North American Natural Resources (NANR) acquisition in 2022 to an renewable natural gas (RNG) site, TPH analyst Matthew Blair wrote on Jan. 19.

“However, in a potentially more interesting development, KMI is evaluating keeping the rest of the NANR assets as renewable electricity, now that they can generate D3 RINs [cellulosic biofuel] as part of the EPA’s eRINs program,” he said. “This has implications for other credit markets, as slower industry RNG growth could help the CA LCFS market rebalance more quickly.”

Regarding California’s Low Carbon Fuel Standard, KMI said that “prices have eased the past two weeks following increases the previous seven weeks. Current prices stand at $65/tonne. We believe that rough weather in [California] is likely impacting demand for petroleum fuels, which is bringing down deficit creation and loosening up the market.”