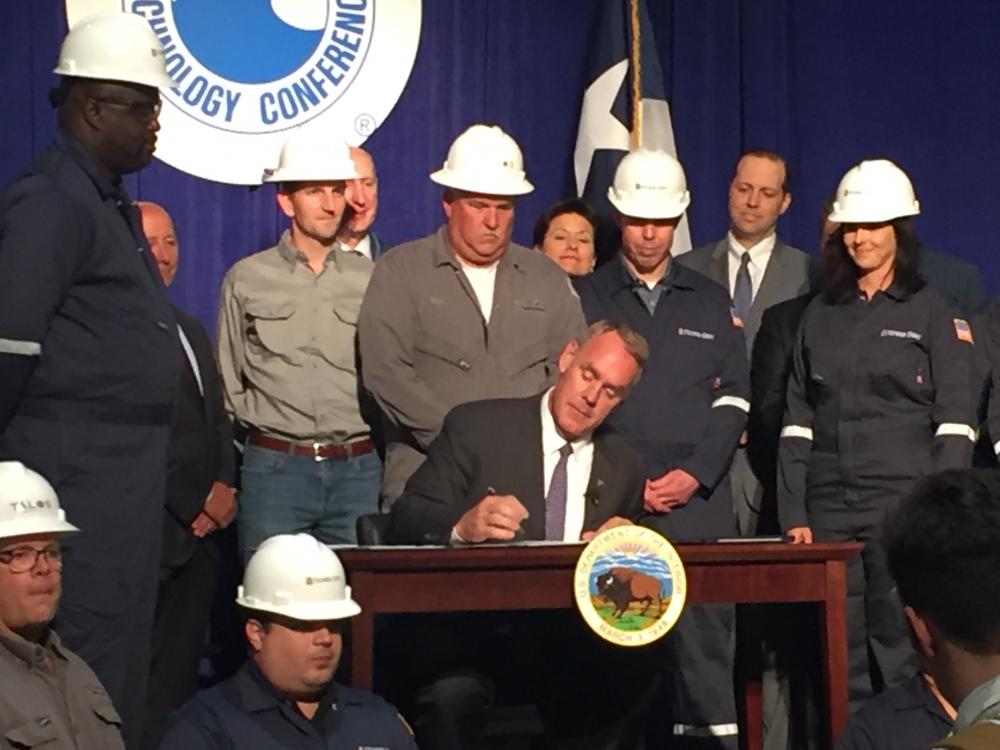 HOUSTON—Secretary of the Department of the Interior Ryan Zinke was at the side of President Donald J. Trump as he signed the America First Offshore Energy Executive Order on April 28. Two days later he came to the Offshore Technology Conference (OTC) and signed two secretarial orders which will put the President’s order into action and intended to further offshore exploration.

Speaking at the Consumer Energy Alliance policy session on May 1, Zinke, flanked by men and women who work on offshore oil and gas rigs, signed the first secretarial order implementing Trump’s executive order to direct the Bureau of Ocean Energy Management (BOEM) to develop a new five-year plan for oil and gas exploration in offshore waters and to reconsider a number of regulations governing those activities.

“We’re going to look at everything. We have to look at infrastructure. How is it that we extract wealth from our public lands in a meaningful, responsible way,” Zinke said. “How do we incentivize American energy dominance? There’s a difference between energy independence and dominance. We’re in a position to dominate.”

He also announced and signed an order creating a new position at the Department of Interior—Counselor to the Secretary for Energy Policy—to coordinate the Interior Department’s energy portfolio that spans nine of its 10 bureaus.

“Between all of the different departments I have, it’s confusing, even for me,” he said. “I need a single point of contact so that you can talk energy with the Department of Interior so that we are on the same page.”

“We have to make sure we are streamlined, and we have to restore trust,” he continued. “We won’t change the rules after you’ve invested. We’ll be an advocate working with you, not against you because we understand that investment is our only answer to a great nation.”

The Trump administration said the executive order is intended to boost U.S. domestic production and to reverse bans set by former President Barack Obama on drilling in areas of the Atlantic, Pacific and Arctic oceans, as well as U.S. Gulf of Mexico.

At OTC, Zinke reiterated those intentions and stressed the importance of energy to the American economy.

“There is a cost, a social cost, to not having a job in this country,” Zinke said. “The economy as good, bad or indifferent resides on energy...We have to make sure that our energy is reliable, abundant and affordable. I can tell you, if you don’t have a good economy under the hood then the rest of it doesn’t matter.”

He also emphasized energy’s importance to national security. “I can tell you from a guy who's seen war up close and personal, I don’t want your children to ever go to war over a resource that we have in America,” the ex-Navy SEAL said. “As it turns out, we do have resources.”

He also addressed environmental concerns over opening offshore leases in the Outer Continental Shelf and the Gulf of Mexico.

“I’m a Teddy Roosevelt Republican and Teddy was about multiple resources,” Zinke said. “Roosevelt was the one who said, ‘Conservation is as much about development as it is about preservation.’ You can have preservation, conservation and economic development all at once by using sound practices, science and technology.

“The President and myself, we don’t pick winners and losers,” he continued. “We don’t favor oil and gas over any other industry. We just want to make sure the field is even and America can use its resources.”

He also reiterated comments he made in a statement released shortly after Trump signed his executive order pointing toward energy as a driver of revenue for the country. “We made $15 billion more a year in 2008 than last year, and that’s just in offshore. Now, some of that is market driven,” he said.

In June 2008, average wellhead natural gas prices were $10.82, the highest recorded price, according to the Energy Information Administration, so it’s unclear if the revenue loss is due to prices or activity.

“But dropping $15 billion a year, year after year, has consequences,” he said. “I’m also in charge of the Land and Water Conservation Fund. Great program. That’s funded by offshore."

He also said that Americans are the stakeholders in how public lands are used and must have a seat at the table. “We want to make sure it’s value added, that there is a reclamation plan in place, and like good Boy Scouts, we want to leave our campfire site in the same or better position than when we found it."

“That’s why I’m confident in you,” he continued, addressing industry delegates directly. “The United States has the most stringent, toughest, best regulatory framework for safety and environmental extraction of resources in the world."