While overall seismic activity is down in South America, like many other places in the world today, there are signs that newer land seismic acquisition technology seems to be making inroads in the South American market. Newer technology means using wireless seismic systems instead of cabled systems and/or using high-sensitivity single sensors instead of receiver arrays.

The land wireless (or cableless) seismic acquisition revolution hit North America in the 2008-2009 time frame and very quickly proved to be a technical and economic success. A couple of years after that, tests in Africa and Europe convinced Total to make wireless systems their corporate technology choice for land seismic data acquisition. The rationale for the choice to use wireless rather than cabled systems has been presented in numerous publications and venues, so suffice it to say that increased productivity, reduced costs, comparable or better data quality and lesser HSE effects have catalyzed its acceptance by the industry. Furthermore, the wireless systems are evolving to address what some have perceived as the inherent weaknesses of these systems: the inability to provide sufficient information in real time about the status of the live spread of receiver stations and to deliver in real time substantial amounts of seismic data. This evolution is indicated by the improvement in systems to deliver a greater volume of seismic data and the development of devices such as the Line Health Recorder, a pocket-sized unit (small enough that every crew member can easily carry one) that records station status, including root mean square noise levels.

Greater acceptance
It has taken longer for wireless systems to make inroads in other places in the world outside of North America, and one place in particular is South America. However, there are signs that this situation is changing there, even though the industry is currently in a contraction mode.

In addition to the increased use of wireless technology in land 2-D and 3-D seismic surveys in South America, the use of high-sensitivity single-sensor receivers in place of receiver arrays (most typically with six elements) also is increasing. Table 1 gives at least a partial listing of surveys done since 2008 involving wireless systems as well as single-sensor stations.

One of the appealing reasons for the use of high-sensitivity single sensors rather than arrays is the reduced field effort due to (1) lower weight of a single phone rather than three, six or 12 phones on a string of cable, (2) a smaller volume of equipment to transport and carry in the field and (3) the reduced effort in planting a much smaller number of phones. While these reasons are valid in flat or rolling but easily accessible terrain, it is notably true in operationally difficult terrain (see, for example, Figure 1), which are among some of the most prospective areas in South America.

There are some good arguments for the use of receiver arrays when they are designed with some forethought, with the intent of the design (1) to minimize some particular wavelength(s) of noise based on tests (or experience) in the survey area and/or (2) to reduce random noise. When such forethought is absent, which is often the case in the industry today (outside of the Middle East), or when the ambient noise is not random, the effectiveness of arrays becomes much reduced. Over the last few years there have been several published studies concluding that ambient noise typically encountered (wind noise, rain noise, etc.) during seismic surveys is not random and that arrays deliver a bit less than 50% of what they theoretically would deliver if the noise was truly random.

In areas with rugged terrain, the use of arrays generally degenerates to simply planting all the sensors in a small bunch, which produces no array benefit and effectively only increases the sensitivity to ground motion by the number of sensors planted. A high-sensitivity sensor accomplishes the same result with much less effort in deployment and retrieval. Many 2-D and 3-D surveys in South America are now using the high-sensitivity single-sensor approach, delivering data with no discernible difference in interpretability at a reduced cost compared to using strings of multiple sensors at each station. When it is recognized that the survey located in the terrain shown in Figure 1 required the services of all the available professional mountain climbers in Bolivia to deploy and retrieve the equipment, it becomes obvious why strings of sensors (as well as cable recording units) would have been cost-prohibitive. 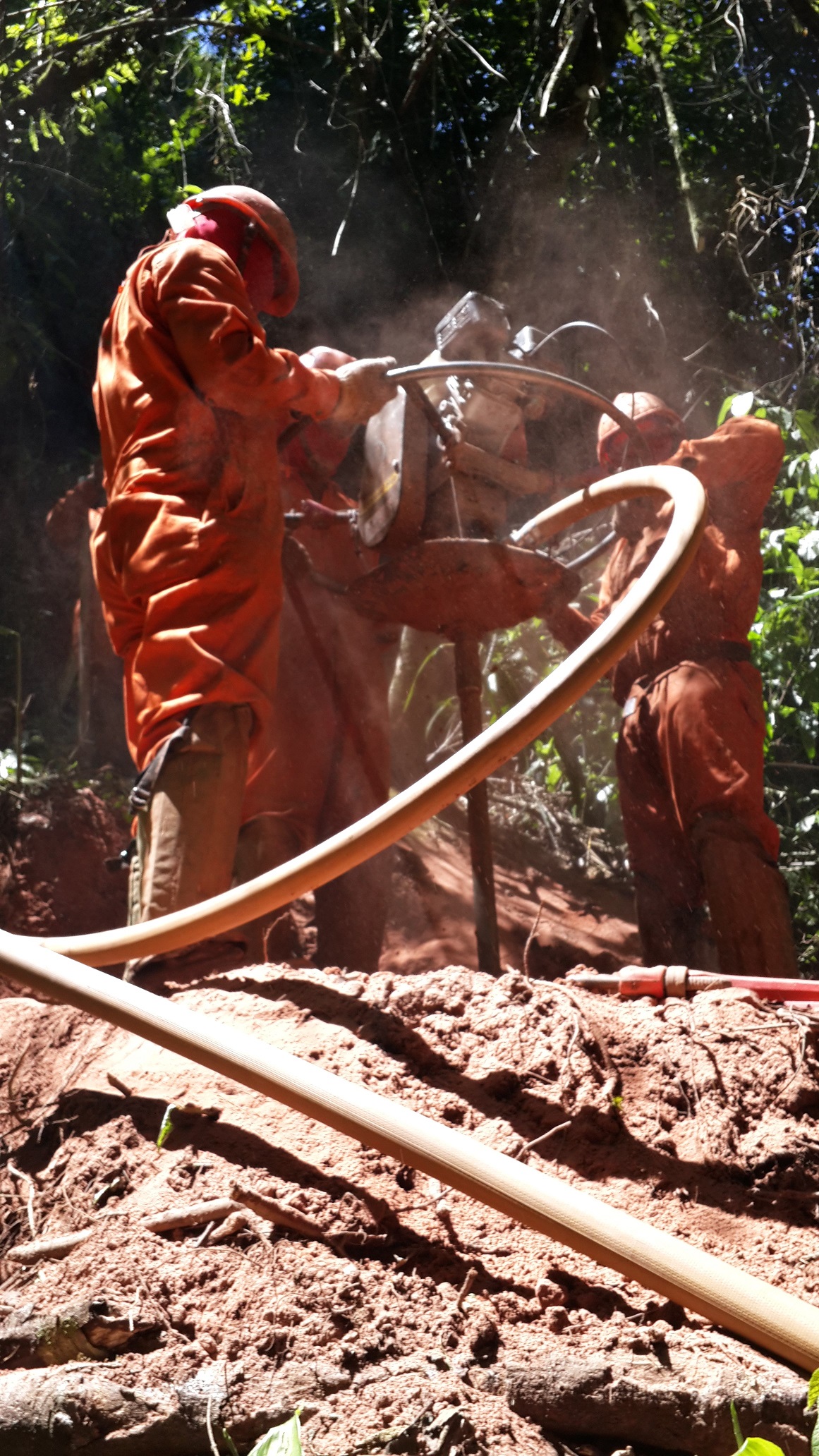 Surveying concerns
As elsewhere in the world, oil companies in South America can face challenges for a variety of reasons in obtaining the required permits and permission to shoot seismic surveys. Environmental concerns are obviously one important reason for the necessity of permits. There can be a variety of reasons to obtain permission from local communities before shooting a seismic survey, and some of those reasons have contributed to slowing the adoption of new technology. For example, there have been instances of local opposition to using wireless systems that require the employment of fewer locally hired crew members.

In other instances, poor communications have led to local communities being misinformed about exactly what the operations would entail in shooting a seismic survey. An extreme example of this occurred when the operations associated with a gravity survey were presented to, and approved by, a group of town residents, and then shot-hole drillers with explosives appeared. The miscommunication was unintentional, but nonetheless the local community was very upset. The industry must learn very quickly from such incidents and ensure that communications are accurate, informative, straightforward and useful. Again, as throughout the world, operators continue to work to establish better relationships with people living in areas where seismic surveys are desired. And finally, there are areas in South America where securing the safety of the seismic operations is still not a foregone conclusion.

Because the industry in South America is intent on increasing the production of oil and gas, it is quickly learning how to address the myriad complications that can stop, delay or make cost-prohibitive the acquisition of seismic data. One of the major approaches it is employing is the increased application of advanced seismic acquisition technologies such as wireless acquisition systems and high-sensitivity geophones. 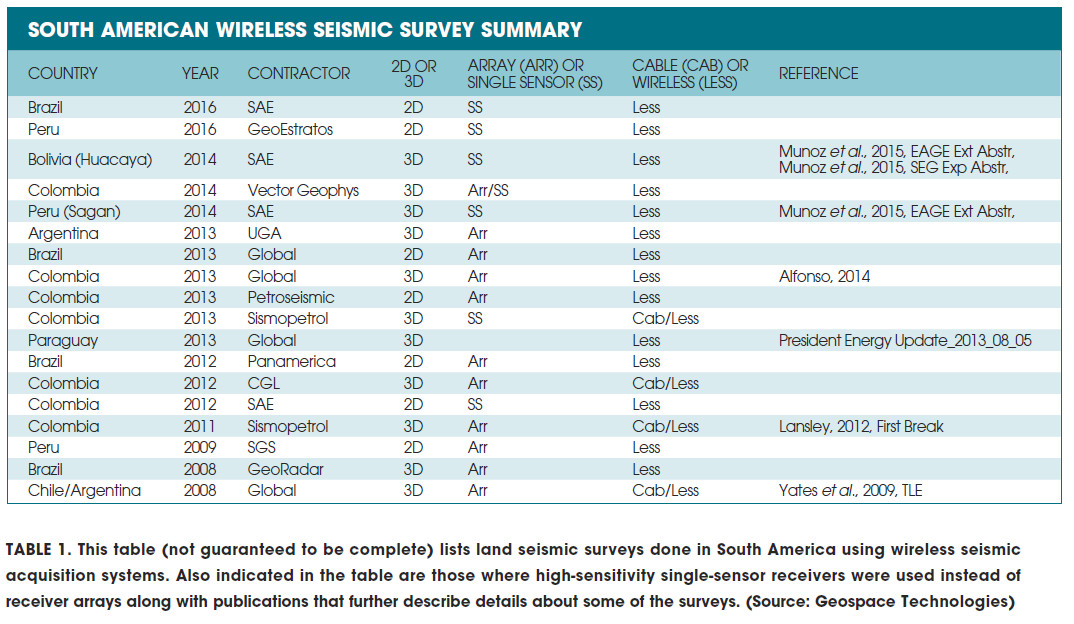 Here’s a quicklist of oil and gas assets on the market including a Midland Basin royalty position plus a Grenadier Energy Wolfcamp Shale Permian Basin package and an IOG Oklahoma STACK nonoperated opportunity.

Here’s a quicklist of oil and gas assets on the market including Fairway Resources Oklahoma properties and Kaiser-Francis Oil well package in Louisiana plus the offer from Centennial Resource Production to acquire or farm in certain operated assets in the Permian Basin of Reeves County, Texas.

Here’s a quicklist of oil and gas assets on the market including a proposed online sale by BLM parcels in Nevada’s Lincoln County to be handled by EnergyNet in July.