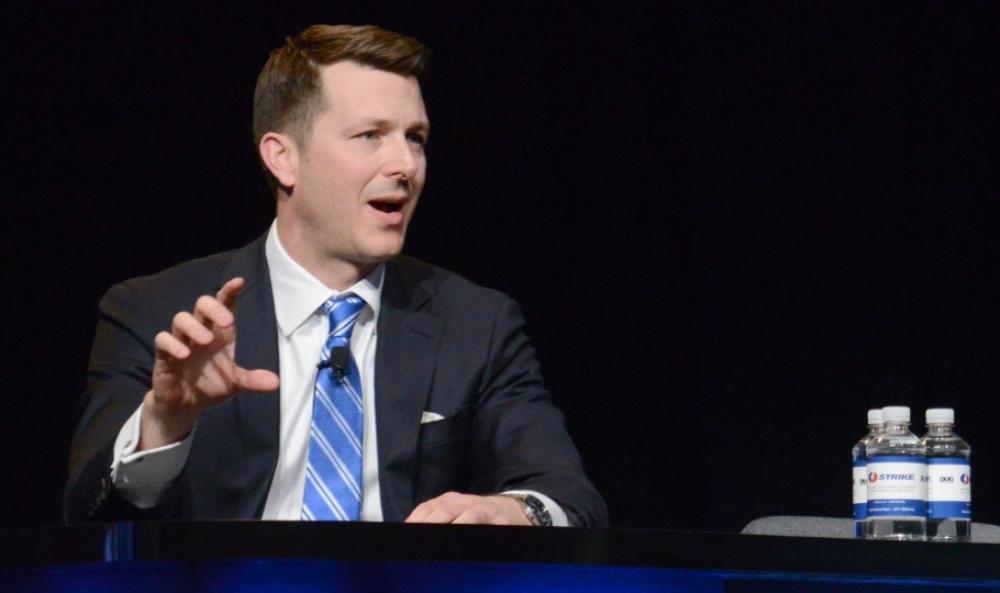 DENVER—If managing the movement of molecules over vast distances wasn’t enough to do, getting schooled in social media may be next on the agenda for certain midstream CEOs. And it may be a more important task than previously realized, according to Ethan Bellamy, senior research analyst covering the midstream sector for Robert W. Baird & Co.

“Overall, we don’t see any problems in large-diameter gas lines or oil lines getting out of the Bakken or the D-J,” Bellamy said. “With DAPL [Dakota Access Pipeline] coming online, we have ample capacity. We don’t think crude by rail will be needed until probably the end of 2018 in our most aggressive scenario.”

An exception is that there could be “some limited NGL capacity constraints” in the Bakken, where the NGL takeaway infrastructure is “less mature” compared to oil or dry gas.

“By 2020, you could see a lack of capacity coming out of the region,” said Bellamy, noting a North Dakota Pipeline Authority forecast that NGL production is likely to exceed capacity sometime in the next five years.

For producers, the fact that the region has “a lot of spare capacity to get you down to Cushing” translates into “really good netbacks and revenue security,” Bellamy said. The other side of the coin, however, is that it’s “not so good if you’re in the midstream business and recontracting pipelines.”

“They’ve done a fantastic job of bringing volumes from the east. They think Chicago is going to trade below NYMEX, structurally, unless it’s a really cold winter day,” he said. “And they’re looking at points of liquidity and trading hubs much closer to Denver than Clarington, Ohio, which gives you some idea of the gas coming out of the northeast.”

“In 2019, when most of their contracts come up for renewal, they’re really going to have a knife fight on their hands to retain volumes,” Bellamy predicted.

Some of the tactics used by “leave it in the ground” protesters were unusually aggressive, including death threats made to executives, use of Molotov cocktails and millions of dollars of damage inflicted on nearby infrastructure and construction equipment, Bellamy said. The extensive protests were against risk of damage by DAPL to the water source of the Standing Rock Sioux reservation and other tribal ancestral lands.

The implications for future pipelines could be substantial in terms of potential risk factors.

“The real thing that caught some people off-guard here is crowdfunding protest activity,” Bellamy recalled. “The protesters wanted $5,000; they got $1 million. You saw cities, such as Santa Barbara and Seattle, divest themselves not just of ETP securities they held in portfolios, but of relationships with the banks that were project financing Dakota Access.

“Even if you think all of this is crazy, it matters because now, if you’re building a pipeline, on your due diligence list is going to be, ‘Have you checked all these boxes to make sure that these stakeholders are not going to come after us, because the CEOs of the banks—not just Energy Transfer—got death threats about this. That’s the degree of vehemence we’re dealing with here.”

Bellamy noted that Kelcy Warren, CEO of ETP, acknowledged having underestimated the impact that social media might bring to bear.

Although “legally and technically they did everything right,” said Bellamy, other factors might have helped change the outcome.

“Do not underestimate social media,” he agreed. “Even if you have all the facts in the world, and you know why you’re making the economic decisions you’re making, and you know why one route is better than another, that doesn’t matter when people’s feelings are hurt. You need to get out there and engage. Showing respect to the people—even when they’re criticizing you—goes a long way.”

In addition, there is an issue of social license that should be considered, according to Bellamy.

“Just because you can technically do something, and the engineers say you can get it done, is it really a good idea? Do you really want to spend your time fighting in the press? A role that is being combative is not the solution.”

And for those in the business of moving molecules, Bellamy emphasized, “don’t spill things, don’t give ammo to the opposition.”

Bellamy gave a checklist for those undertaking such projects:

Chris Sheehan can be reached at csheehan@hartenergy.com.