As the industry confronts increasingly complex formations, sophisticated drilling methods such as managed pressure drilling (MPD) are being implemented with greater frequency to overcome technical and financial obstacles. MPD, which maintains constant bottomhole pressure (CBHP) by applying surface backpressure (SBP) in a closed-loop system, has a strong track record for maintaining wellbore integrity while improving drilling efficiency. The approach is especially effective when used in concert with wellbore strengthening (WBS) techniques, further mitigating risk and cost.

A major operator worked with Weatherford to implement a combination of MPD and WBS techniques to successfully drill challenging hole sections in five offshore development wells in a region of the Caribbean Sea that had been producing since 1961.

Previous attempts by the operator to conventionally drill the sections had resulted in costly remediation, including sidetracks, due to bottomhole pressure (BHP) fluctuations and poor wellbore stability. The repetitive fluctuations that occurred as a result of lost frictional pressure when pumps were turned on and off between drilling and makeup led to wellbore fatigue, especially when crossing through the unstable shale sections.

Creating a drilling window
The centerpiece of the project was the Weatherford Microflux MPD Control System, an automated closed-loop system that, unlike conventional drilling methods, detects and controls even the most minor fluid influxes or losses to minimize well control incidents and enhance drilling efficiency. This enables operators to make decisions based on actual surface and wellbore data rather than predictive models. The system’s ability to optimize mud weight is especially beneficial when the window between pore pressure and fracture gradient is very narrow or, in this case, nonexistent.

A key component of the automated MPD control system is the rotating control device used in the closed-loop system to contain annular fluids while drilling. The device makes underbalanced, near-balanced and overbalanced drilling possible when the risk of gas kicks is elevated. It diverts fluids through a control manifold engineered with advanced sensory technology that extracts critical data from the fluids.

Extensive planning and engineering determined the optimum mud weight, rheology of the WBS material, and drilling fluid and drilling parameters for the MPD operation for all phases of the project, including drilling, tripping, well balancing, WBS pill placement, liner running, cementing and contingency MPD operations.

Weatherford used the automated MPD control system to drill the section from the 13 5⁄8-in. casing shoe at 4,037 m (13,245 ft) measured depth (MD) to the top of the first shale at 4,359 m (14,302 ft) MD. In this section the team used an 11.7 ppg equivalent mud weight (EMW) fluid while dynamically strengthening the wellbore, incorporating lost circulation material into the drilling fluid to increase the anticipated sand fracture gradient from 8.9 ppg to 11.9 ppg EMW. Before reaching the first shale, it applied SBP to create 11.9 ppg equivalent circulating density (ECD) while drilling and 11.9 ppg EMW when making connections. A 10.8-ppg mud pumped at 1,100 gal/m was used for drilling to ensure good hole cleaning, and 625 psi SBP was applied during connections to minimize pressure fluctuations. 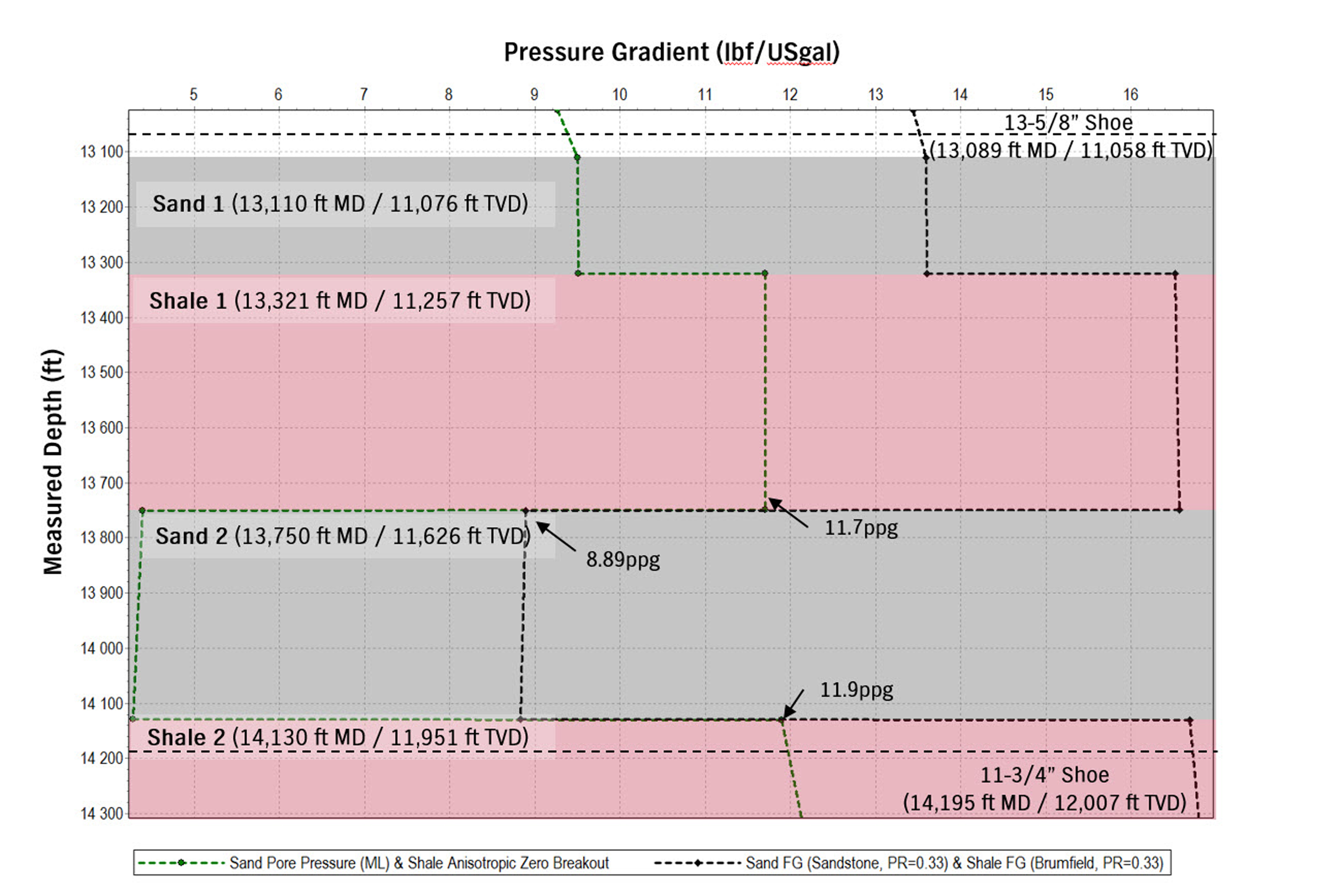 The drilling window was defined by unstable shale and the fracture gradient of the depleted sand, leaving no drilling window. MPD was used to drill from 4,359 m to 4,684 m MD with a 12.5-ppg mud at 900 gpm and 600-psi SBP applied during connections. While drilling, the depleted sand was dynamically strengthened to 13.4 ppg EMW until TD, when the sand was further strengthened to 14.34 ppg EMW.

In both sections MPD tripping, circulating and cementing strategies ensured the downhole ECD was within the new operating window during the liner run and cementing operations. Once the depleted sands were fully exposed, a static WBS technique was applied to create a window for tripping and running the liner. In this case, with the bit at bottom, the operator used a limited-volume WBS pill, spotting the corresponding mud volume with the required concentration in front of the sand and suspending circulation. MPD applied SBP until the target EMW was reached. The string was rotated and reciprocated up and down slowly to prevent differential sticking. Using MPD technology enabled the driller to keep the bit on bottom and effectively eliminated the need for a wiper trip. 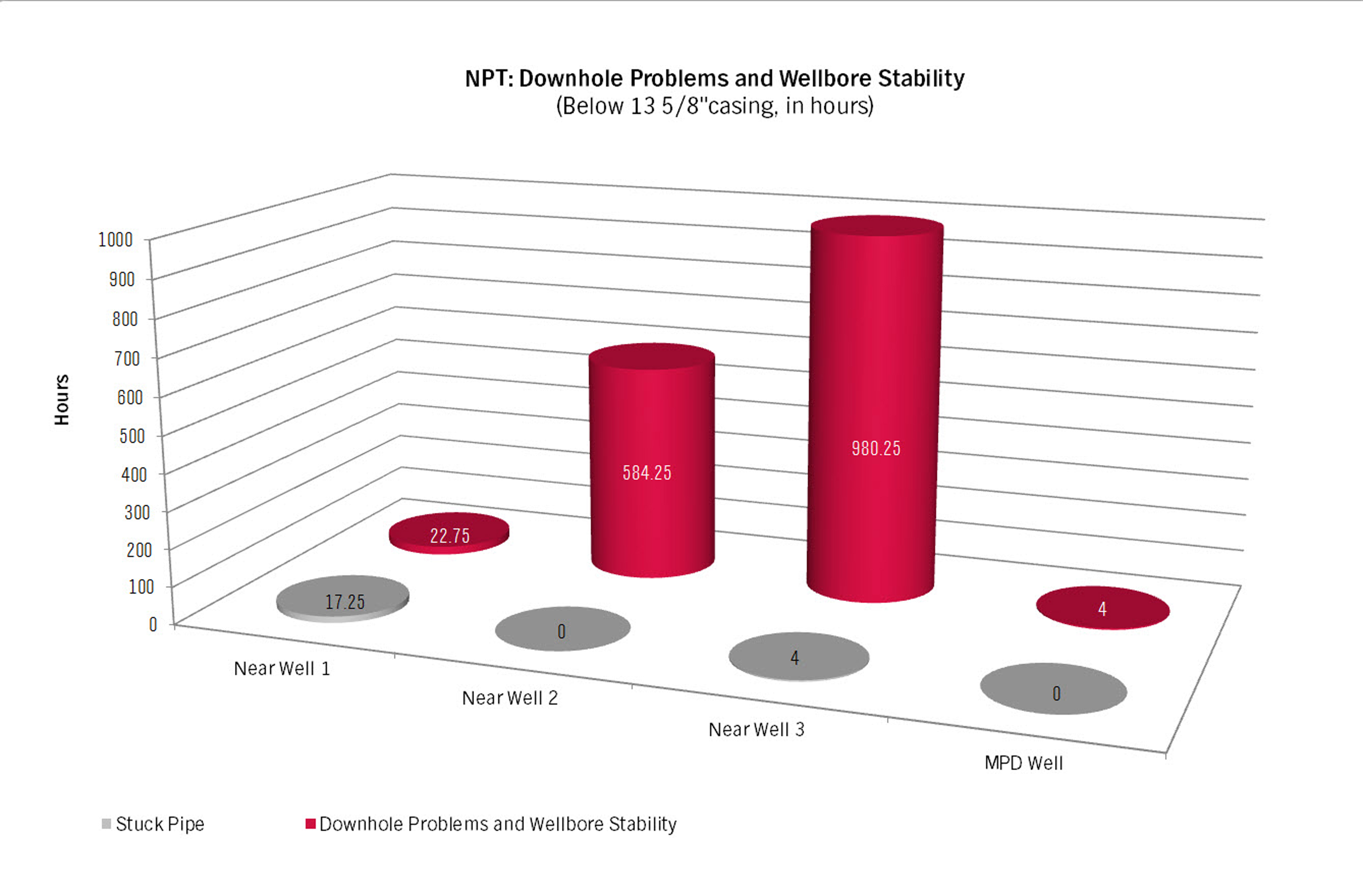