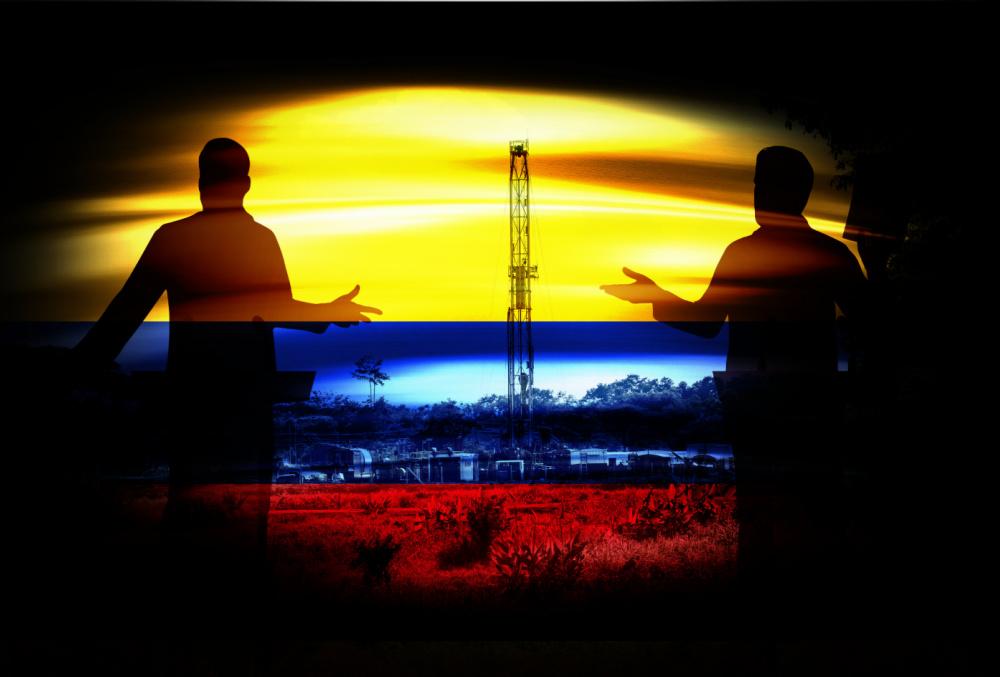 Candidates Petro and Hernández will next face off in the second and final round of elections on June 19 with the winner assuming the presidency of the South American country on Aug. 7. (Source: Hart Energy, Shutterstock.com)

Colombian presidential hopefuls Gustavo Petro and Rodolfo Hernández will face off next month in second round elections that pit the political left versus the right and candidates on opposite extremes regarding the direction of the country’s extractive industries.

Both the U.S. government and U.S. investors would have been more comfortable with Fico making the runoff rather than Hernández or Petro but they’re stuck with two bad options, Baker Institute for Public Policy’s Political Science Fellow Mark P. Jones told Hart Energy from Houston.

“From a fracking, energy investment and U.S. foreign relations point of view, Hernández is far preferable to Petro although his populist nature and policy foundations make him something of a wild card more along the lines of a Bolsonaro [in Brazil] than a more traditional conservative president such as Duque [in Colombia] or Sebastián Piñera [in Chile] or Luis Lacalle [in Uruguay]. Petro is clearly a bad option… he’s on the left ideologically, he’s anti-U.S. and likely to revise the free trade agreement and has a hostile attitude towards oil and natural gas, and a very friendly relationship with the Maduro government [in Venezuela] as well as with Cuba.”

Candidates Petro and Hernández will next face off in the second and final round of elections on June 19 with the winner assuming the presidency of the South American country on Aug. 7.

“Rodolfo Hernández is still something of a black box. It’s hard to understand who backed him and how principled he will really be on key issues if he does succeed in winning the presidency,” Bogotá-based political risk analyst Wes Tomaselli told Hart Energy. “Where Petro is likely to fight tooth and nail for a ban on oil exploration and fracking contracts, it’s unlikely that Hernández will make the oil sector his target.”

Colombia’s mining and energy sectors are important contributors to the economy. Combined, the sectors contribute between 7%-8% of gross domestic product (GDP), 12%-15% of government revenues, 50%-55% of the country’s exports and 30%-33% of foreign direct investment (FDI), according to details revealed last week by the Mines and Energy Ministry.

Petro and Hernández agree Colombia must continue to transition to cleaner energies but diverge on actions related to oil, gas and coal extractive activities.

Petro favors a move away from an energy matrix dominated by fossil fuels and an economy dependent on oil and coal to one that includes more renewable energies to confront issues that contribute to climate change, according to a document posted to his website that lays out his vision for Colombia.

But, Petro would “prohibit the exploration and exploitation of unconventional deposits” and halt “offshore developments and pilot fracking projects.” Petro is also against granting new exploration licenses, the document shows.

Hernández, dubbed as the ‘Colombian Trump’ by political pundits due to his anti-corruption campaign pledge, favors a continued clean energy push but not at the immediate expense of extractive activities,” according to a similar document posted to his website that details his vision for Colombia.

Hernández favors “balanced exploitation” that is environmentally friendly and “generates social developments… while serving as a plan to transition towards the production of other forms of clean energy and better practices in the exploitation of mining resources.” Hernández also favors changes to boost oil and gas reserves through expanded new exploration processes.

Colombia’s conventional oil and gas reserves are small compared to its energy-rich neighbor Venezuela, which sits atop proven oil reserves estimated at 304 billion barrels, and significant gas reserves, which rank in the top 10 worldwide, according to the bp Statistical Review of World Energy,

Colombia’s proven oil reserves reached 2 billion barrels at the end of 2021, according to the Mines and Energy Ministry, enough to last 7.6 years at current production levels. On the gas side, the county’s proven reserves reached 3.2 Tcf last year, enough to last 8 years, according to the ministry. But these reserves offer little to Colombia in terms of long-term energy security.

Even though Colombia’s oil regulator ANH continues with its permanent bid round process, which has seen international oil companies grab significant blocks in recent years, the activities that hold potential to drastically change the country’s energy profiles relate to offshore exploration and pilot fracking projects onshore.

Offshore, Colombia’s state-owned Ecopetrol is active in two gas exploration wells. The first is the Gorgon-2 well with Shell Colombia and the second is the Uchuva-1 well that it is pursuing alone. Earlier this month, U.S.-based producer Occidental Petroleum and Ecopetrol revealed plans to jointly participate in four blocks offshore Colombia’s deepwater region.

Onshore, Ecopetrol and U.S.-based Exxon Mobil are pursuing two pilot fracking projects Kalé and Platero. Fracking offers the most potential to change Colombia’s energy matrix and oil and gas production profiles. However, the first project is currently suspended, after initiating activities, while the latter is still awaiting approval to move forward.