Gas injection has become a key process in the range of modern solutions that exists within artificial lift operations, and its importance is predicted to increase.

Recent market studies suggest the adoption of gas-lift techniques will increase by up to 30% for depleted wells in the Permian Basin by 2020 while downhole pressure monitoring is expected to increase by 25% to 50% for U.S. land-based applications to about 1,000 wells this year.

However, although the popularity of gas lift is increasing, the majority of the world’s gas-assisted wells operate in a nonoptimal state, and considerable challenges exist around the accurate and effective monitoring and measurement of process efficiency.

Determining the optimal gas injection rate (GIR) for a well has traditionally been a relatively inaccurate procedure involving consideration of the correlations between, for example, nodal analysis from user inputs to establish calculations and infrequent GIR updates. Such procedures have been based on a “set it, test it and change it a week or so later” methodology. This type of method can be expected to deliver an accuracy level of only about 8% to 15% and has clear limitations, given that more accurate methods have been created to achieve much greater returns.

Wells decline over time, and pressure and production rates alter at different rates depending on the age and characteristics of the well. Faced with a depleting well, the operator is left with choices to make regarding the most appropriate artificial lift method to adopt—from electric submersible pump (ESP) to progressive cavity pump, rod lift and gas lift—and the operational methodology to be deployed.

Often used in conjunction with other artificial lift methods such as plunger lift, gas lift’s growth as the preferred option for artificial lift is based on its relative simplicity, low cost and ease of deployment. Gas lift does not require the use of significant downhole machinery or tooling, which means it is an ideal method for deployment in highly deviated horizontal wells. Gas lift also does not have the high lifting costs associated with ESP and is not susceptible to machinery sand influx. The gas-lift process simply supplements depleting gas levels to lower fluid density and brings it to the surface.

The aim of any artificial lift process is to promote bottomhole pressure (BHP) drawdown to encourage the inflow of production from the reservoir. The focus of the Apergy algorithm is to establish the correlation between the rate of gas injection and the BHP drawdown to determine the optimal GIR at any point in the life of the well.

The parabola in Figure 1 indicates the optimal rate of gas injection in a well is equivalent to the maximum achievable drawdown level, which is at the vertex of the parabola. To the left of the parabola’s vertex, where the GIR is lower than optimal, an increase in BHP is created, leading to liquid loading of the well. This situation indicates density in the well is not decreasing at a high enough point to continue optimal inflow production from the reservoir. 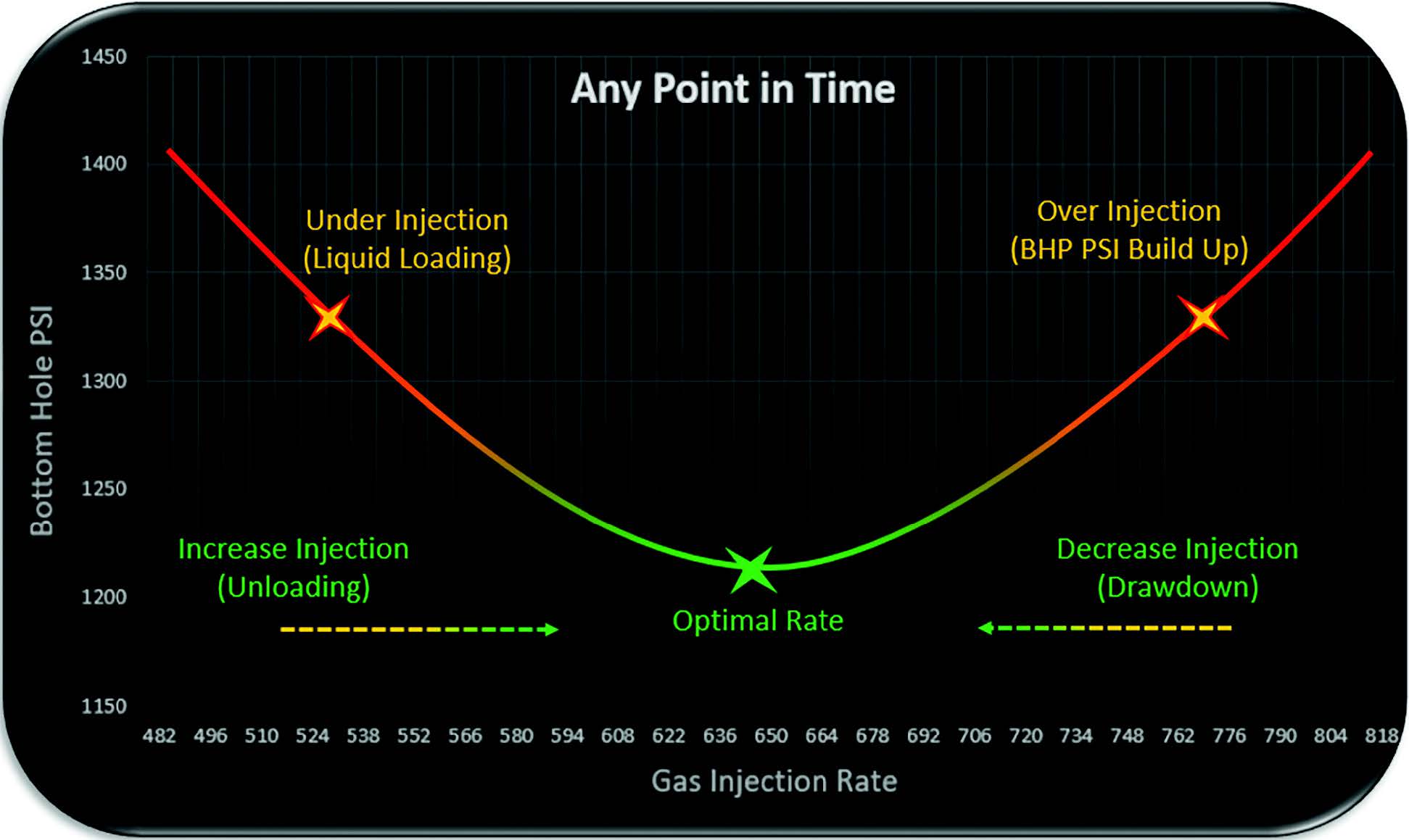 The right-hand side of the parabola vertex indicates what happens when there is an over injection of gas beyond the optimal rate, which creates friction issues. In this scenario, too much energy is being deployed in the well; tubing, casing, wellhead and reservoir pressures are being backed up and the BHP cannot be reduced.

A further complication is well conditions change constantly, so the algorithm has been designed to search for the optimal GIR and continually test it to ensure the well is operating within the optimal range at all times.

When considering, for example, a declining well over a 30-day period, an overall BHP drawdown of 175 psi might be observed. However, that only tells part of the story. The decline slopes observed within that period could be at different rates as the optimal GIR would not be expected to remain static for even seven days, much less 30.

The Apergy algorithm is set up at the surface as part of the company’s Artificial Lift Manager from the PCS Ferguson 8000 Series controllers with a BHP gauge in the bottom of the well transmitting data via cabling, which is linked into the artificial lift controller (Figure 2). The reading from the pressure gauge enables the monitoring of the BHP and the managing of the GIR through the control valve, which increases or decreases the GIR. 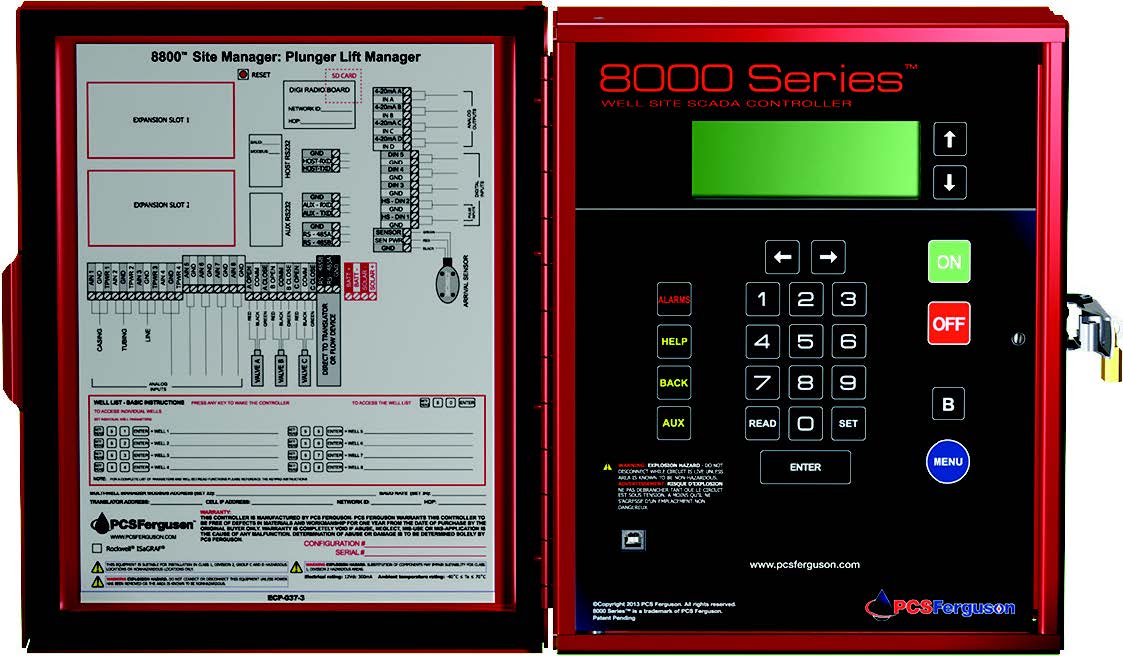 The algorithm is based on a user-defined operational framework and works through the frequent and proportional adjustment of GIR based on the magnitude of BHP drawdown derived from trailing set-point results. Two injection points are established initially, with the difference between those points referred to as the pressure differential Δ1. A further adjustment to the algorithm sets a third point to establish the pressure differential Δ2. If the decline rate for Δ2 is less than for Δ1, this indicates the GIR is moving away from the optimal rate rather than toward it and corrective action is required.

Figure 3 shows the algorithm working in a practical sense in a well in the Permian Basin. Here, the kickoff GIR is established at 14,158 cu. m/d (500,000 cf/d) and is increased at a rate of 1,415.8 cu. m/d (50,000 cf/d) over 24 hours to establish the pressure differential Δ1. A second BHP differential is then created as Δ2 and the two differentials are compared. If the drawdown for Δ2 is greater than for Δ1, then gas injection will be increased because it indicates the well is transferring from a liquid-loading scenario toward optimal GIR. If a decrease in drawdown is observed between Δ2 and Δ1, the injection rate is moving in the wrong direction and the process needs to be inverted with a proportional change in the adjustment magnitude from 1,415.8 cu. m/d to 708 cu. m/d (25,000 cf/d). The focus at all times is on chasing the curve to maintain an injection rate as near to the vertex as possible.

By monitoring BHP drawdown, the algorithm “hunts” for the optimal GIR to stimulate maximum inflow. Once the optimal rate is located, the algorithm will then slightly adjust the GIR to ensure that as well conditions change, the gas-lift system continues at optimal performance.

Wells using the algorithm to date have experienced about a 30% reduction in time associated with restarting gas-lift systems after unscheduled shutdowns. This is because after the wells were interrupted, the algorithm was able to more quickly regain the sharper decline rates than other standard practices.

Given the anticipated growth in downhole pressure monitoring and gas adoption over the next few years, and the wider acceptance that the information obtained from BHP gauges can be used for much more than reservoir modeling alone, this new technology is positioned to enhance the way the industry manages and controls gas-lifted wells.

2022-06-27 - For one large independent operator in the Permian Basin, a new software solution replaced its beloved in-house applications, and the results exceeded expectations.