Cementing is a critical component of the wellbore construction process. The primary purpose of cementing is to provide zonal isolation, stabilize the wellbore and support and protect the casing. More importantly, cementing provides a barrier that prevents gas and fluid migration from the wellbore. When cement slurry is mixed, foam formation and air entrapment can have a detrimental effect on the success of the cement job. Uncontrolled air entrapment can result in pump cavitation, low cement density, inadequate mixing and gas permeability issues. Sources of the undesired foam and entrapped air can be certain cement additives as well as the mechanical mixing itself.

Antifoamers and defoamers are critical elements to cement slurry design. Although both are used to control foaming, they differ on when they are introduced to the slurry system. Antifoams are generally a preventative measure added to the cement blend before mixing. Defoamers are typically liquids introduced once foaming already has occurred in the blender. Solid antifoamers are attractive because of their long-term storage stability and ease of handling under cold climate conditions. Additionally, dry powders can be precisely mixed with the cement blend before the job takes place.

Researchers at Hexion have developed a powder antifoamer designed to be more effective than alternative conventional antifoamers, even at lower concentrations. The X-Air P cement powder antifoam additive allows better density control than conventional cement antifoams, resulting in a higher quality cement job. This antifoam is effective in all classes of cement and formulations containing additives such as naphthalene sulfonate, sodium chloride and various fluid loss additives.

The chemistry of the X-Air P antifoam infuses a proprietary liquid antifoaming agent into a microporous, chemically inert solid carrier. Figure 1 illustrates how the antifoam prevents air entrapment when the slurry is mixed.

Initial laboratory tests were conducted to determine the defoaming efficiency of the X-Air P antifoam compared to commercially available alternative antifoams. Tests were conducted using combinations of hydroxyethyl cellulose (HEC) fluid loss additive, polynaphthalene sulfonate (PNS) dispersant and sodium chloride (NaCl) accelerator in the cement slurry. The X-Air P antifoam and the control were dosed at 0.1% by weight of cement. Figure 2 shows that this antifoam has improved defoaming efficiency over the alternative in all additive variations of the slurry.

Additional slurry integrity tests, such as free water, fluid loss and rheology were conducted. These tests performed following the American Petroleum Institute’s Recommended Practice 10B-2. The X-Air P antifoam had no adverse effect on free water and did not compromise fluid loss control. Rheology tests at 21 C (70 F) and 88 C (190 F) showed a shear thickening trend that closely resembled the alternative antifoam benchmark. 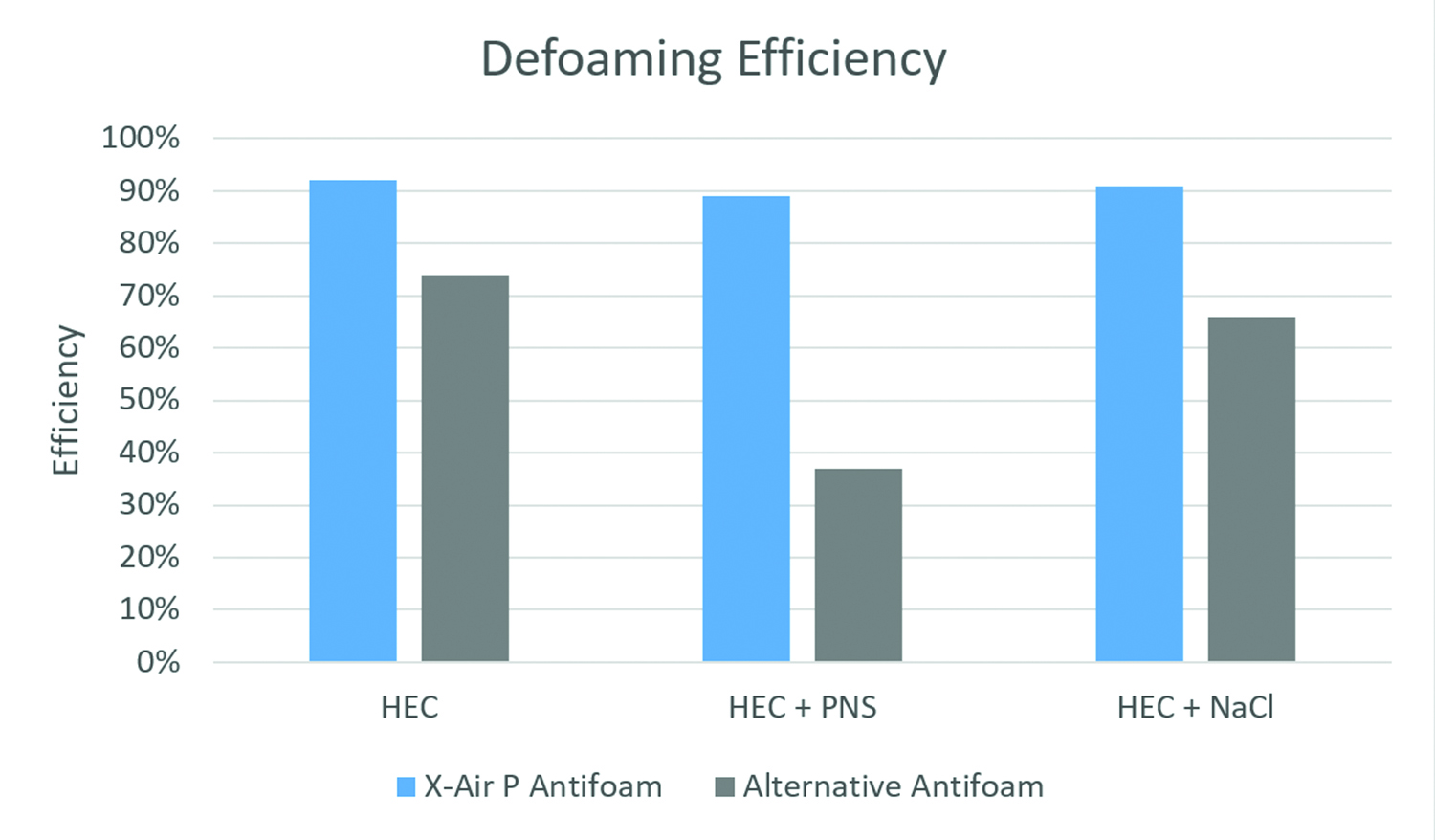 Hexion partnered with one of North America’s cement service companies and conducted a trial on three wells to test the performance of the antifoam in the field. To test the reduction in air entrapment, atmospheric and pressurized mud scales were used to measure the slurry density of the same sample. The pressurized mud scale removes entrapped air by forcing more cement into the slurry cup, which displaces the air. The difference in the two instrument readings was used to show the amount of entrapped air within the cement slurry.

The first well consisted of a 95⁄8-in. casing with 12¼- in. wellbore diameter and a depth of 335 m (1,100 ft). The cement was a 65/35 Class C with a target density of 12.4 lb/gal with 6% bentonite. The X-Air P antifoam was compared to a commercially available alternative antifoam. For the first well, both antifoams were utilized at 0.4% by weight of cement. 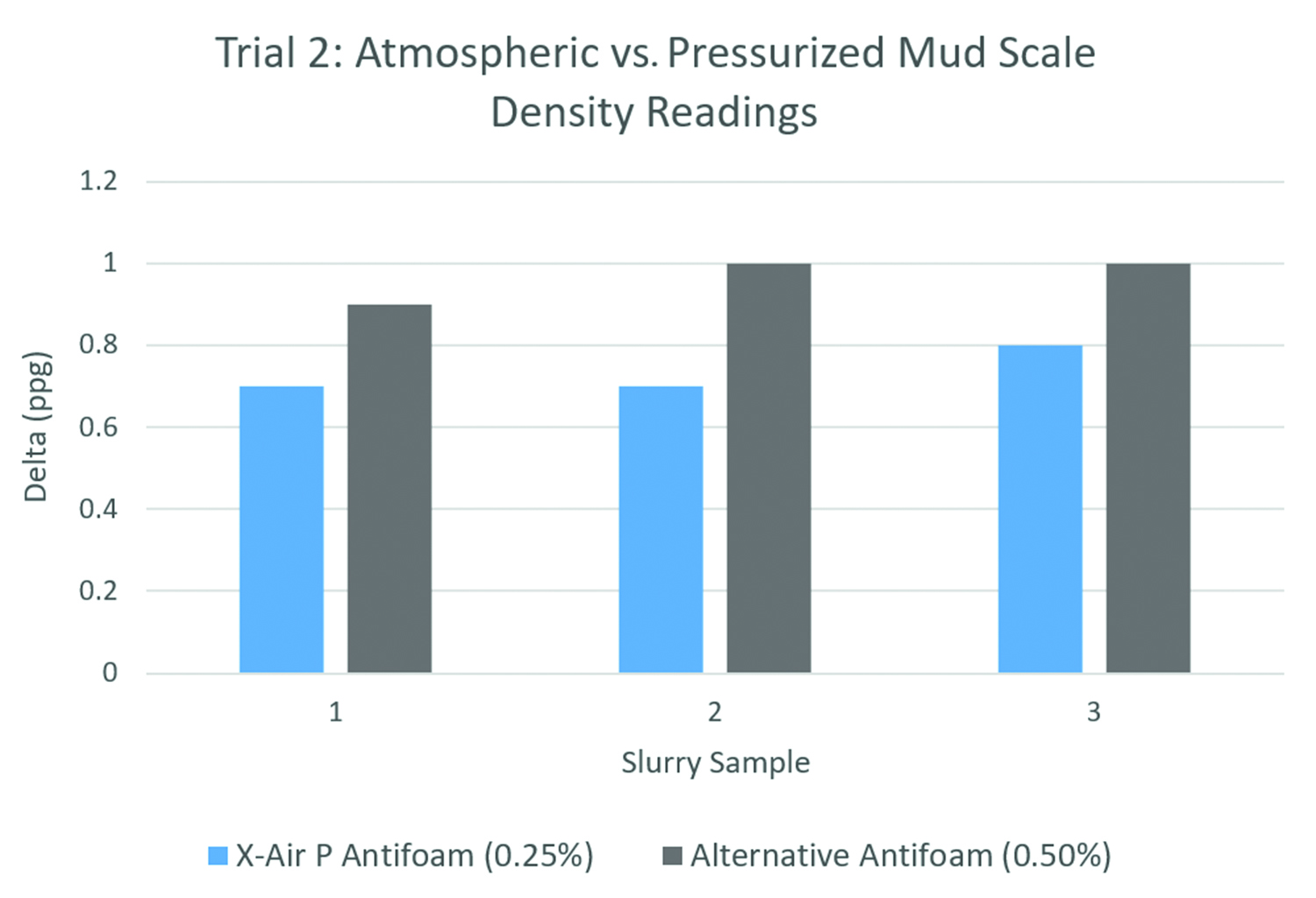 Controlling entrapped air is a critical element for a successful well cementing job. The X-Air P cement powder antifoam not only demonstrated superior control of air entrapment in laboratory settings but it also has a successful track record of field deployment throughout North America. Its unique chemistry provides better density control and allows users to design reliable cement jobs confidently. As demonstrated in the case study, it is more effective than alternative cement antifoams, even at half the concentration. Also, no additional liquid defoamer was needed on location.