This consumption leads to several issues that the industry needs to address that the EPA and environmental organizations are already considering:


These processes are repeated for every well, which begs the question—is there a way of reusing the water flowed back or produced from each well for fracturing the next one? With the drilling of several wells from a single pad, this would mean that the same water could be used for each well on the pad with major reductions in freshwater usage, overall cost and environmental damage.

The water flowed back and/or produced from each well after treatment contains many components that affect formation of traditional crosslinked fracturing fluids and present major barriers to its being used again on an adjacent well:

These components can have a major effect on the quality and performance of fracturing fluids (Figure 1) and would have to be addressed to reuse the water going forward.

FIGURE 1. Major components can have an impact on fracturing fluids. (Source: Weatherford)

Weatherford embarked on a project to address all of these water components to enable its reuse in fracturing operations. It was thought initially that the first step would be to filter out all of the suspended solids, so the company entered into a partnership with a major manufacturer of custom filtration equipment. The onsite filtration equipment resulting from this partnership can remove suspended solids and clarify the water to as low as 5 microns, depending on client preferences and as long as the filtered waste is disposed of in an environmentally safe manner.

The removal of bacteria is vital, so tests were carried out using chlorine dioxide biocide to verify that it would kill the bacteria in the water. This biocide, rated by the EPA as a powerful but safe water disinfectant (Safe Water Drinking Act of 1974), will not adversely affect the fluid pH in the well or react with most organics.

Once suspended solids and bacteria were addressed, what remained was to test chemical methods of negating the effect of interfering ions, salinity, boron, calcium and chlorides. Two new robust fracturing fluid systems were developed and tested that, when added to the water, result in a clean, low-residue stimulation fluid. These materials are environmentally friendly gelling agents and crosslinkers unaffected by the remaining water content and can treat water that is high in salinity, total dissolved solids (TDS), multivalent ions and boron while providing excellent proppant transport and conductivity.

The resulting water imitates the properties of freshwater, thus precluding any formation damage, and can handle salt concentrations of more than 300,000 ppm, up to 30,000 ppm of divalent ions, more than 400 ppm boron and 185,000 ppm chlorides. This water performs well in temperatures from 38 C to 149 C (100 F to 300 F) and maintains high, closely controlled viscosity levels that can carry proppant for long periods at high bottomhole pressures.

The WaterSure Standard fluid system is a water crosslinking system unaffected by high TDS, boron or chlorides using a conventional base guar gel with specialized crosslinker. It has three major components: a crosslinking function, a pH buffer and a basic gelling agent combined with a high TDS-tolerant surfactant and scale inhibitor. It is recommended for temperatures up to 121 C (250 F).

The WaterSure Clean fluid system has similar properties and main components but uses a derivatized metal-based system and a pure gel with the crosslinker specially formulated for produced water use. It is recommended for temperatures of 149 C or more.

An example of the performance of a 20 lb/3,785 l (1,000 gal) WaterSure fluid system in produced water with the listed contents is illustrated in the rheology chart in Figure 2. 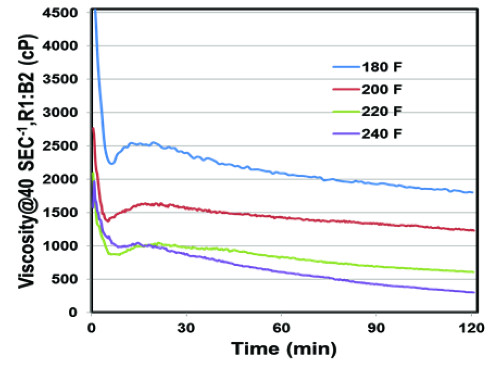 FIGURE 2. The performance test results of 20 lb/3,785 l of fluid in an untreated produced water sample are shown. (Source: Weatherford)

It is important to note that the water treated with WaterSure does not need to be filtered prior to use, but it is available if required by the client. In addition, the SureSlick fluid system has been developed to act as a reliable friction reducer for water with salinity up to 300,000 ppm TDS.

At the time of writing, several fluid tests and permeability regain analysis have been performed successfully using produced water. The system should address many of the issues that multizone fracturing has presented and eventually could result in:


Having chemical treatments that are not affected by interfering ions can enable minimal water treatment and provide an optimal fluid that is not sensitive to variations in water quality.