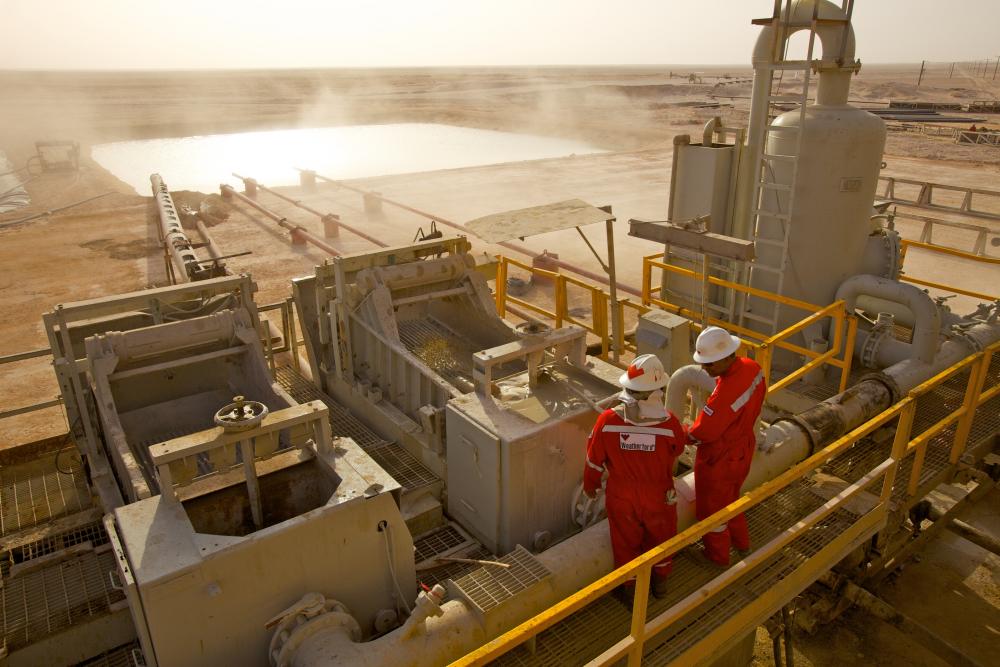 Companies like Weatherford are using their technical expertise gained during the U.S. shale revolution to tap unconventional reserves in the Middle East. (Source: Weatherford)

In the vast expanse of Middle Eastern deserts that are rich in hydrocarbons but scarce in water, the thirst for the region’s unconventional resources could be difficult to quench. But the U.S. shale boom has taught the world how to extract formerly inaccessible hydrocarbons using technological breakthroughs. Advanced drilling techniques, hydraulic fracturing and digitalization have contributed to the surge in American barrels, and experts forecast oil production to hit a record 13.4 MMbbl/d by the end of 2019.

Tapping unconventional reserves
According to an estimate by Baker Hughes, a GE company (BHGE), Saudi Arabia holds 18.2 Bcm (645 Tcf) of unconventional reserves. Aramco has been exploring shale gas prospects in the South Ghawar and Jafurah basins, the latter of which is often compared to the Eagle Ford Shale play because of its size and vast amount of deposits. According to Arab News, the Jafurah Basin could produce approximately 16.9 Bcm (600 Tcf) of shale gas because the layer that Aramco is targeting in that basin is the source rock for the Al-Ghawar oil field. Aramco also plans to build a reverse-osmosis desalination plant to treat Persian Gulf seawater for use in fracturing wells in the Jafurah Basin.

Aramco CEO Amin Nasser said in a recent statement that the company is building facilities to support shale gas development in the kingdom’s oil-rich eastern region. “We are looking to take our unconventional gas within the next 10 years to 3 billion standard cubic feet per day of sales gas,” Nasser said.

Abu Dhabi National Oil Co. (ADNOC) announced last year the discovery of up to 424.8 Bcm (15 Tcf) of gas from unconventional reserves. Much of the United Arab Emirates’ gas is sour, requiring stripping of sulfur to produce gas suitable for consumption. ADNOC aims to reach 28.3 MMcm/d (1 Bcf/d) of unconventional gas production before 2030.

Oman began production from its unconventional resources in 2017 when it partnered with BP on the Khazzan natural gas field project, which is expected to recover 297.3 Bcm (10.5 Tcf) of tight gas.

Strategic partnerships
International oil companies are using technical expertise gained during U.S. operations to duplicate the shale revolution in several parts of the world, including China, Argentina and the Middle East.

“[Weatherford is] in the process of bringing hydraulic fracturing technologies used in the North American market to the Middle East,” said Frederico Justus, president of Eastern Hemisphere at Weatherford. “We are working on unconventional gas projects in Saudi Arabia where it is deploying jet pumps and using flowback techniques that are not commonly used in this region. On the completions side, the North American market widely uses the perf-and-plug technology, which we are trying to develop in the unconventional space in the Middle East,” he said.

In 2012 BHGE established the Dhahran Technology Center in Dhahran Techno Valley to conduct research in support of all the activities of Aramco and other key players in the Middle East. “The center is a commitment to drive research and development to understand the rocks that we are drilling and producing from,” said Hans-Christian Freitag, vice president of Geoscience and Petroleum Engineering at BHGE.

Following its integrated gas strategy, ADNOC is taking major strides in the area of exploration and development of its unconventional gas reserves to become gas self-sufficient. According to reports, ADNOC joined the unconventional development race last year—following its major gas discovery—and signed an agreement with Total, granting the company a 40% concession to explore, appraise and develop the Ruwais Diyab Unconventional Gas Concession.

ADNOC Drilling signed a contract with BHGE to provide it with the latest technologies and training personnel to develop unconventionals, Karim Ben Boubaker, strategic marketing manager of the Middle East, North Africa, Turkey and India at BHGE, told E&P. ADNOC has commissioned a 3-D seismic survey to identify conventional and unconventional resources and is expected to conclude in 2021. The field development is expected to begin in the next three years.

Overcoming challenges
Despite the progress, unlocking full shale potential in the Middle East is easier said than done. The cost of producing a barrel of oil equivalent in the region could be much higher than in the U.S. shale plays due to several factors. On average, more than 5 MMgal of freshwater are used to fracture one gas well in the U.S, according to the American Chemical Society. However, this could prove to be a challenge. The Middle East and North Africa regions are the world’s most waterscarce, according to a World Economic Forum report.

“We are expecting fracking and flowback developments in the region, but water can prove to be a challenge,” Justus said. “Due to the unavailability of freshwater in the desert area, flowback can prove to be costly and we doubt its commercial application.”

BHGE is using technologies that utilize salty water for hydraulic fracturing, which can be drilled in the desert. “It’s a matter of using water unfit for human consumption or agricultural use. We are looking at other ways of fracking the rock, such as CO2, but we believe that using water unfit for other uses will promote cost efficiency,” Freitag said.

He added that the lifting cost of conventional oil and gas is significantly lower than the costs associated with unconventionals, which is detrimental to shale development. “One of the biggest differences between shale plays in North America and the Middle East is how the activity is driven. The U.S. has more than 3,000 operators that are drilling shale. Other countries, including China and Argentina, have fewer operators, which means each operator has to drill more. The trial-and-error method that was used in the U.S. to develop an understanding of shale plays is not feasible in the Middle East,” he said.

Identifying the obstacles, BHGE began focusing subsurface modeling efforts in the Middle East on deriving a sophisticated model of rock behavior for understanding reliable and efficient methods of modeling the development of a fracture system. Using data from seismic surveys, well logging and production from fractured wells, the company is working on a cohesive model to predict behavior and outcome of shale plays in the Middle East. “We are delivering results of our studies that were used to drill and frac wells to our clients in the Middle East and the results are very encouraging,” Freitag said.

Conclusion
The shale industry in the Middle East is clearly evolving. The shale extraction technology is taking giant leaps forward and the rapid progress could eventually allow Middle Eastern countries to boost production from unconventional reserves significantly. With gas playing an increasingly major role, particularly in power generation, the development of unconventional gas reserves in the region could transform the hydrocarbon footprint of the Middle Eastern countries and increase the proportion of cleaner fuel in their energy mix.