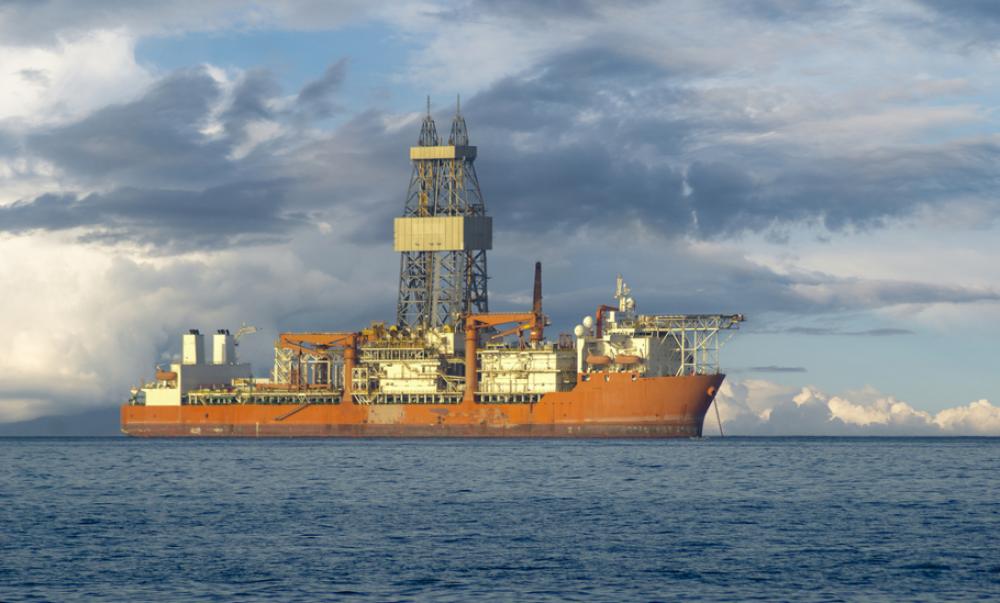 The United States has proposed opening more than 98% of the nation’s Outer Continental Shelf to oil and gas leasing with 47 potential lease sales—the most ever offered; however, don’t expect industry players to pounce quickly, even if the draft becomes reality.

The draft proposed program, presented by the Interior Department this week, comes as President Donald Trump works to open up more areas for domestic oil and gas drilling.

Although the process is in its early days and typically takes years to complete as U.S. authorities gather public comment and consider revisions to the proposed draft, thoughts are on how the oil and gas companies could respond. Will they place bids on blocks in newly proposed areas? Will they act on exploration plans in areas with existing infrastructure? Will oil prices or the appeal of shale plays stop them?

Regardless, the industry’s response will likely be a slow one given the abundance of factors at play, according to William Turner, senior research analyst for Wood Mackenzie.

There’s the money factor, for starters, as the industry continues to rebuild from a downturn and seek more commodity price stability. Offshore exploration spending has tanked worldwide, including in the U.S., in recent years. Then, there are aboveground risks, considering the 2019-2024 National Outer Continental Shelf Oil and Gas Leasing Draft Proposed Program has drawn opposition from several states with even Republicans falling on both sides of the proposed draft plan.

The draft proposed program’s 47 potential lease sales cover 25 of the 26 planning areas with the lone exception being an area offshore Alaska—the North Aleutian Basin—that was removed from future offshore leasing by former President George W. Bush, said Katherine MacGregor, principal deputy assistant for Land and Minerals Management. The program proposes 19 sales offshore Alaska, seven in the Pacific region, 12 in the Gulf of Mexico (GoM) and nine in the Atlantic region. 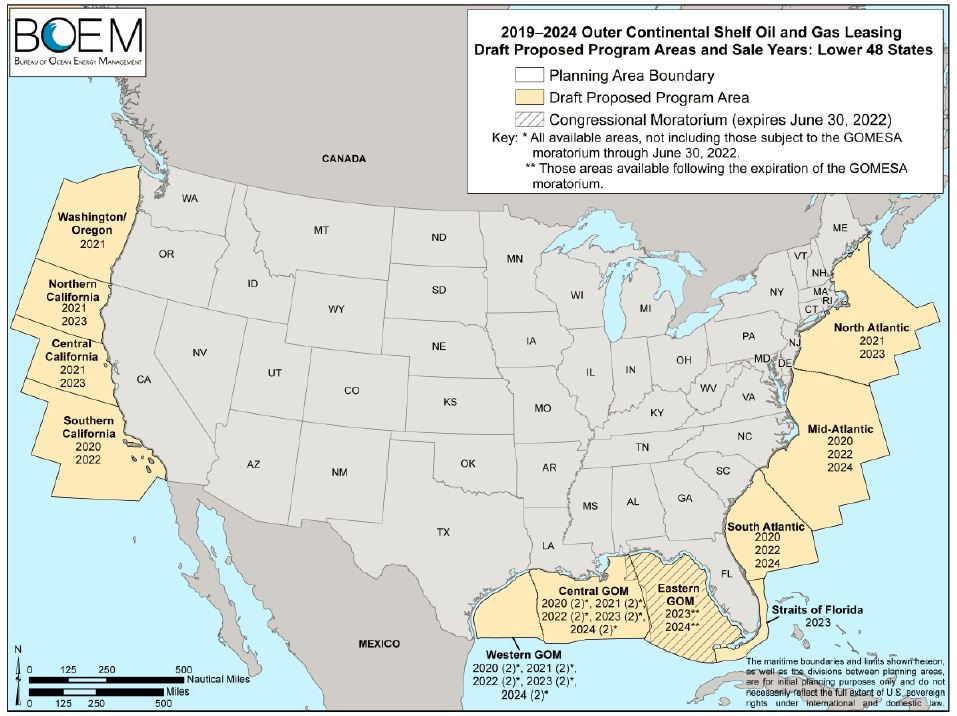 Although the proposal would open up areas sought-after by some in the oil and gas industry, including the Atlantic, there is just so much to consider, Turner told Hart Energy. Going into any new frontier area is an extremely big investment, he said, pointing out seismic data so old that it’s better to just start from scratch—a move some seismic companies are already pursuing for the eastern GoM and the Atlantic.

Technical and geological risks are also factors for certain areas.

“When you’re developing these new areas it requires one or two things either you develop it with an FPSO [unit] like is done in West Africa with shuttle tankers that run back and forth with the oil or you lay export pipeline, which is what we’ve traditionally done in the Gulf of Mexico. That’s a huge expense,” Turner said. “Is the government later going to come around and devise or subsidize some of those investments?”

Even if that did happen, oil and gas explorers would still have to contend with Mother Nature.

Companies know how the Gulf of Mexico behaves, given the amount of energy work that has taken place there; however, the Atlantic is another story.

“You have the Gulf Stream to contend with, which is a consistent 3-knot current from south to north that I don’t think you can put a platform in,” Turner said, referring to the Atlantic. “You would have to tie that back either closer to shore or all the way to shore, and the closer you get to shore the easier it is to see from people’s beach house. So you’re going to get pushback from that.”

Other risks include the probability of a new administration coming in 2020 or 2024 with another agenda.

“There’s not going to be any platform already producing oil in a seven-year window. That would be extremely fast. Whatever plans they are going to be developing will be subject to a new administration at some point,” Turner said.

But the main driver will be commodity prices, he said.

Speaking to the media during a conference call Jan. 4, MacGregor spoke to industry interest in the Chukchi and Beaufort seas, in particular, which are not included in the current leasing plan that was approved under the Obama administration. “I think that you will see folks that are very interested in the vast array of different potential plays in different areas offshore Alaska,” MacGregor said. But she pointed out the price of oil is beyond the Interior Department’s control.

“The price of oil is very hard to predict,” she said.

West Texas Intermediate crude futures dropped by 1% to $61.41 per barrel on the afternoon of Jan.5, while Brent fell to $67.66 per barrel—both down from the previous day’s close that marked the strongest since May 2015, according to a Reuters report. The prices, which were far above lows reached during the worst of the downturn, fell as “soaring U.S. production undermined a 10% rally from December lows that was driven by tightening supply and political tensions in OPEC member Iran.”

The oil price was $96/bbl in 2008 when a lease sale generated tens of millions of dollars, including for one block that brought in more than $100 million, MacGregor said, noting at the time that blocks in the Chukchi and Beaufort were included in lease sales.

Yet, not all lease sales have generated much interest from oil and gas companies, despite the abundance of acreage made available. Typically, only a small percentage of total acres offered to attract bids. For example, bids were received on 90 of the 14,177 blocks (77 million acres) offered during the August 2017 GoM lease sale.

That was also the case with the December 2017 National Petroleum Reserve in Alaska (NPR-A) lease sale. Only seven bids were received for about 80,000 acres, or less than 1% of the 10.3 million acres offered.

MacGregor said the NPR-A sale offered areas that had been previously offered for lease, “so it’s very hard to measure interest when you’re offering areas that have already been open and offered.”

Still, analysts believe some areas will definitely generate interest, especially areas with or near existing infrastructure. These include the GoM and offshore Alaska.

“It’s a step-out, low-risk opportunity,” Wolters said, adding Eni had to upgrade a rig for the work. “Operators with a position already on the North Slope that could drill an extended reach well into a federal block or even build limited new infrastructure and bring those volumes onstream quickly, I think will generate some interest.

“But the higher-impact projects are going to have a lot of opposition,” Wolters added, recalling the protests and lawsuits Shell faced in the U.S. Arctic.

Turner said he expects lease sales in the eastern GoM will be the first area to generate interest, mainly because of its close proximity to existing infrastructure, support vessels, workforce talent and the probability of facing the least opposition given the GoM’s oil and gas E&P history.

“The Atlantic could be interesting but again the Gulf Stream is a little bit of a risk, and I think you’re going to get a lot more feedback from the East Coast states,” he added. “Technically and geologically California is probably interesting to a lot of operators, but I think it goes without saying that you’re going to get a lot of pushback from the state of California.” 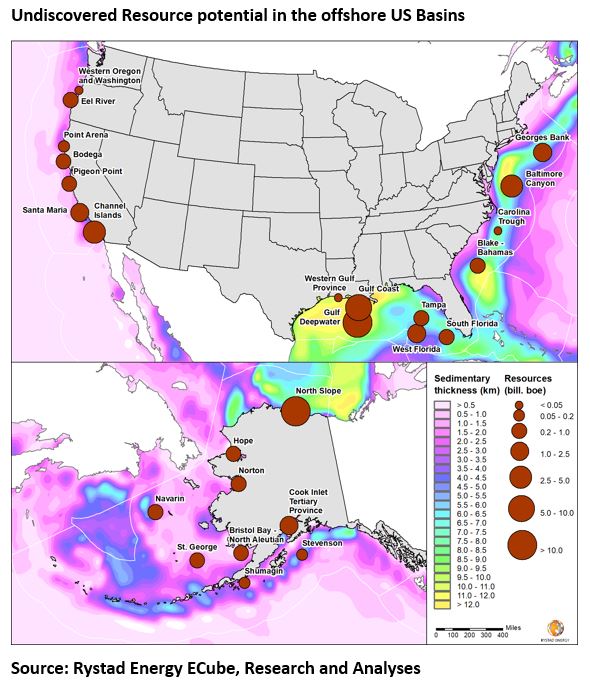 Rystad Energy estimates that the proposal could unlock up to 65 billion barrels of oil equivalent. “This figure excludes resource potential from western and central areas of the GOM – both coastal and deep waters,” Rystad said in a news release. “It includes, however, the eastern part of the GoM, which is currently under congressional moratorium until the end of June 2022.”

A lease sale for eastern GoM area wouldn’t take place until 2023, according to MacGregor.

Beginning Jan. 16, public meetings will take place across the U.S. on the draft. Comments gathered will be used in preparing the Draft Programmatic Environmental Impact Statement. Ultimately, all comments received will be taken into consideration when devising the Proposed Program, which also has a public comment period, followed by the Proposed Final Program.

The draft proposed program, the one unveiled Jan. 4, will be available for public comment for 60 days following its publication in the Federal Register, the Interior Department said.

The interior secretary is charged under federal law with striking “the appropriate balance between a multitude of different factors,” MacGregor said, noting this includes the interest of oil and gas producers, environmental sensitivity, location and other issues. “After this 60-day comment period goes live our next step will be to put forward a proposed program and that could change very much from what you see today.”