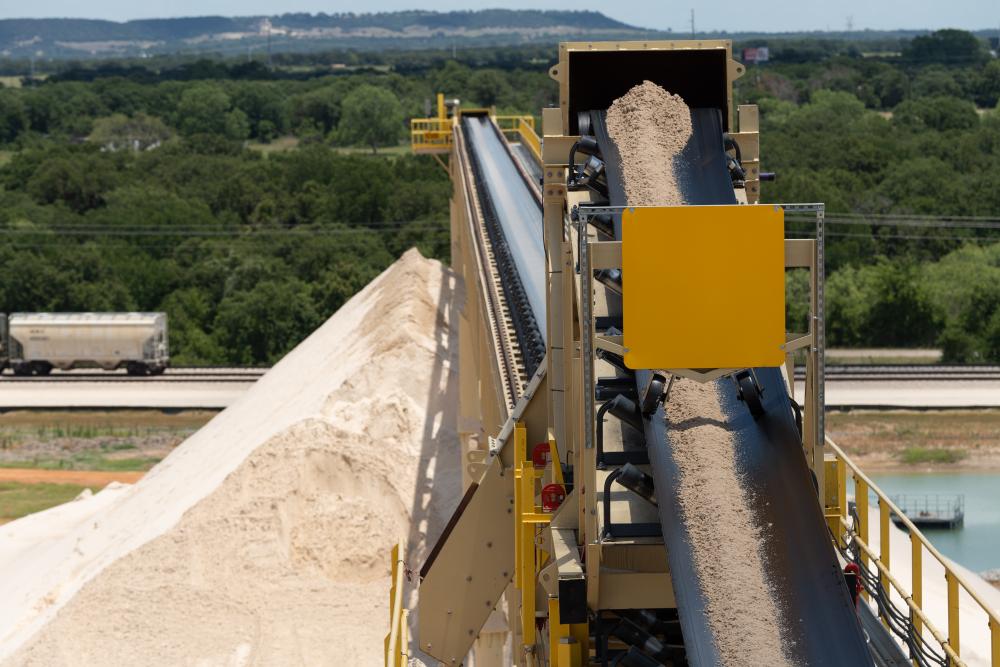 The 200 mesh sand can be transported via rail and truck, unlike silica flour. (Source: Vista Proppants and Logistics)

Since the mid-2000s, the effects of proppant on hydrocarbon recovery began to gain significantly more attention from frac engineers, executive leadership and even on Wall Street as the modern industry spotlight shifted to operating efficiency and return on capital. As publicly traded operators began to search for ways to maximize return, high-volume consumables such as proppant were some of the lowest hanging fruit for enhancing efficiencies and a closer look was taken. As the industry progressed into 2015, proppant preference began shifting away from coarser mesh sand such as 20/40 and 30/50, in favor of finer grades such as 40/70 and 100 mesh. Results from thousands of fine-mesh wells supported substantial benefits from the switch. Finer mesh proppants have now become the norm, yet the industry is constantly innovating, and engineers are now challenging the 100 mesh status quo to determine the benefits of pumping even finer sand.

A modern proppant
The modern 200 mesh is a finer, lighter proppant. Its physical properties allow the smaller particles to stay suspended longer in slickwater mixtures and more easily flow around corners or rock whereas larger grain sands typically settle out. Historically, the industry has referred to 200 mesh as “silica flour” and found it less practical for fracturing and most useful in cementing applications such as zonal isolations. However, as the proppant industry has matured, sieve distributions have become more accurately defined. Modern 200 mesh is coarser than legacy silica flour (Figure 1) and, as a result, supports different physical properties. 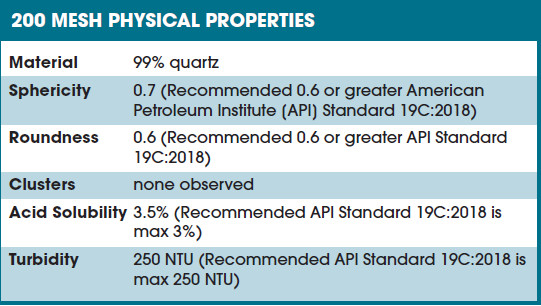 The smaller grain sizes of 200 mesh increase flowability and penetrate farther into fractures when pumped in larger volumes. This allows fractures to remain open longer in locations that would typically close because they are physically unreachable by the coarser grains. Additionally, naturally occurring 200 mesh provides favorable crush strength—minimum K-factors check in at more than 13,000 psi. Higher K-factors indicate the proppants’ resistance to crush under high pressure. Once sand “crushes out,” its ability to prop open fractures in shale significantly diminishes. In comparison, typical K-factors for premium Northern white 100 mesh are of 10,000 psi to 11,000 psi.

Engineers have attributed the success of 200 mesh in wells to its ability to be placed within the complex fracturing networks and its improved capacity in slickwater systems as compared to 100 mesh designs. In addition, 200 mesh proppants provide less wash out around perforations and result in more evenly distributed fractures and higher crush strengths.

Applying fine-mesh proppant
The benefits of fine-mesh proppants have been understood for years. The industry has been materially using modern 200 mesh in frac designs since 2016. Operators claim that its use does not compromise existing fracturing routines and can be used in place of coarser mesh sizes at any point during the fracturing process, whether that be leading in, tailing out or through complete substitution. Some select operators have adopted frac designs that omit 100 mesh and other coarse-grain sands completely and solely focus on the benefits of fine mesh.

“We started out by replacing 40/70 with 100 mesh and saw improved well results,” said Jared Brady, completions engineer at Devon Energy. “The next logical step was to go finer to see if we could replicate the leading E&P company’s success with 200 mesh. The first well we trialed with 200 mesh generated the best results to date that we have experienced.”

Devon was soon able to prove that the first well was not an anomaly, as production results continued to improve versus wells that received coarser sand.

Operators in South Texas also have applied finemesh proppants in their completions. While developing the dry gas window in the Eagle Ford, Pursuit Oil and Gas was working at optimizing its completion design to maximize productivity and recovery from its wells. One of the parameters the company considered changing was proppant size, so Pursuit investigated adding 200 mesh sand to its design. The company wanted to leverage some of the attributes of the 200 mesh such as lower settling velocity to enhance the ability of the fluid to carry the proppant farther into the fracture network and the smaller size of the proppant making it better suited to prop some additional microfractures. Traditionally, finer proppants, such as 200 mesh, have been used for fluid loss control, so it was believed that they could be an added benefit as well. Based on the production results from its latest generation wells, Pursuit plans to continue using the 200 mesh in its design going forward.

Widespread adoption challenges
Although fine-mesh proppant is currently being utilized in Texas, Oklahoma and New Mexico, widespread adoption has been gradual. According to Devon Energy, the only factor preventing it from universally adopting 200 mesh in other basins has been availability.

Naturally occurring deposits of 200 mesh are scarce, with the most prolific scale occurring within North Texas. Mining companies without fine-grade deposits may elect to blast, grind and/or crush their coarser material to arrive at a fabricated 200 mesh. However, there may be tax implications for the end user due to these processing procedures. Vista Proppants and Logistics produces a naturally occurring 200 mesh sand, and the company has been mining its ultrafine Granbury and Tolar, Texas, deposits since 2011 (Figure 2) and selling 200 mesh to its customers since 2016.

A Comparison Of Northern White Versus In-basin Sand

An analysis of efficiencies and permeability shows benefits of Northern white sand.