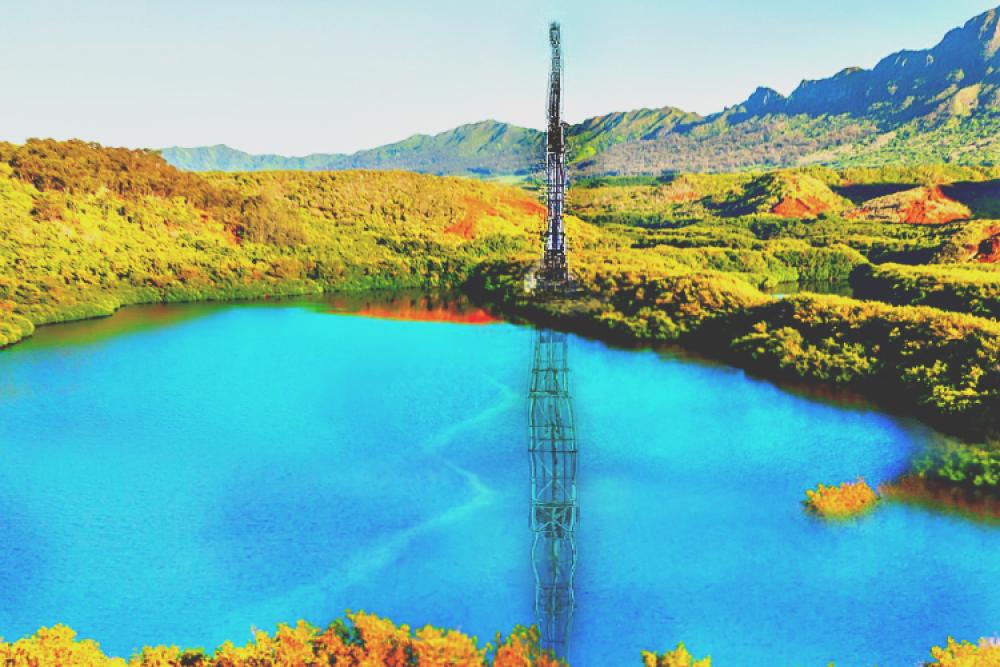 In Greek mythology, the Fates, called Moirai, spun the threads of human existence and wove a person’s lifespan, joys and suffering.

The Fates of A&D still walk the earth, and they are called WTI prices.

How commodity prices fare may well continue to dominate transactions in 2017. But while Permian Basin deals carried deal activity and values in 2016, the giant land grab deals there may be dwindling, with deals moving from the $1 billion range to smaller bolt-ons. To get things moving in other plays, such as the Eagle Ford and Bakken, still higher prices are likely needed.

Even in a depressed commodity market, A&D markets recovered sharply in 2016, with a 70% increase in transaction values, Wells Fargo Securities said. In fourth-quarter 2016, 31 deals totaled $16.5 billion.

“Within this band, we expect prices to remain volatile, with more risk of dropping,” Marshall said.

Prices at the upper end of the range would increase supply and development of the world’s most expensive oil—from oil sands and deepwater resources—in an environment with lower development costs than in recent years.

Price limbo is realistic despite the agreements by OPEC members and non-OPEC countries to cut oil production by a combined 1.8 million barrels per day (bbl/d). OPEC nations are as notorious for flouting quotas as the cartel is for enforcing them.

“We remain skeptical that a global balancing of production and demand is likely through at least the first half of 2017,” Marshall said. “Increased oil prices will also raise capital spending and production by U.S. shale producers in particular, a group whose extraction costs have declined.”

“Debt and equity markets are again offering financing to execute M&A transactions for North American E&P companies seeking to reposition and enhance asset portfolios after a lull during the downturn,” Joshi said.

Companies have also capitalized on market sentiment with step-out acquisitions beyond their core areas.

“We expect this asset level activity to continue, with a particular focus in the Permian,” Joshi said. “In time, E&P companies will pursue even larger deals, including corporate transactions of companies with attractive assets.” 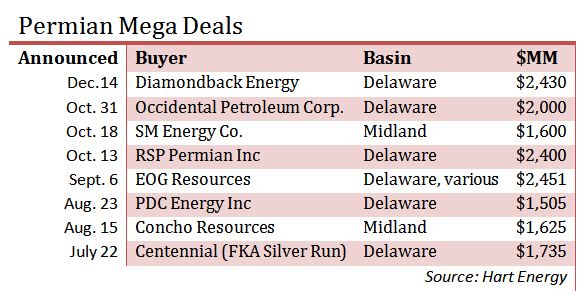 But the extent of Permian Basin treasure still left to acquire is a matter of debate.

Sam Burwell, an analyst at Canaccord Genuity who covers the Permian Basin, said most deals in the Midland and Delaware have seen public companies snatch up private equity companies.

That window may be closing as the Midland and Delaware stock may be approaching depletion.

“I think M&A kind of has to cool down at least in terms of the private equity-backed companies getting acquired because we’re out of them,” he said. “Given the frenzy that happening really since the summer and into the fall, when Delaware acreage prices went from $10,000 and under to $45,000, I don’t see where it can really go higher than that. Or I don’t think you can see the same volume of transactions simply because we’re kind of tapped out.”

Public companies have been able to sell Permian transactions to investors with the pitch that their capital, technical prowess and ability to drill longer laterals would make even high acreage price deals accretive.

In mid-December, the company filed for an IPO with the Securities and Exchange Commission (SEC).

As of Sept. 30, Jagged Peak identified 1,265 gross horizontal drilling locations in the Lower Wolfcamp A, the Upper Wolfcamp A, the Wolfcamp B and the 3rd Bone Spring Sand formations, assuming 880-ft horizontal spacing in an offset pattern and a minimum vertical separation of 175 ft within target formations. About 69% of our identified locations are classified as long or extra-long laterals, with an average length of 8,806 ft.

“Jagged peak has enough acreage and production by now to move the needle for a larger buyer looking to establish or supplement a position in the Delaware,” Burwell said. “They’re probably the final big domino to fall. Fewer buyers is another reason why I think M&A volume there is not going to be as high in ‘17 as in ‘16.”

The Delaware does feature other players farther to the west, but in areas that are generally gassier.

“That’s both a fair criticism and unfair at the same time,” Burwell said. He noted that in many areas recoveries are much higher and have the same oil recovery rates, with gas and NGLs added as “gravy.”

However, well costs can be higher in the western part of the Delaware and infrastructure is somewhat less developed than it is farther east

“There is enough activity. It’s not like this is totally barren land and nobody’s drilled and there’s no infrastructure at all,” he said. “I would say it’s marginally less developed than areas farther to the east.”

Unless companies get more interested in going farther west of the Delaware, acquisitions will probably trend smaller, “probably along the size of Callon acquiring Amerdev. That was [a] $600 million [deal].”

“Most of my transactions have been clients that have already been in a basin to get adjacent acreage positions to either be able to drill more efficiently,” said Mike Bengtson, an attorney at Baker Botts who handles M&A and capital formation transactions.

Beyond the Permian, the Stack play in Oklahoma is also considered more or less sewn up. 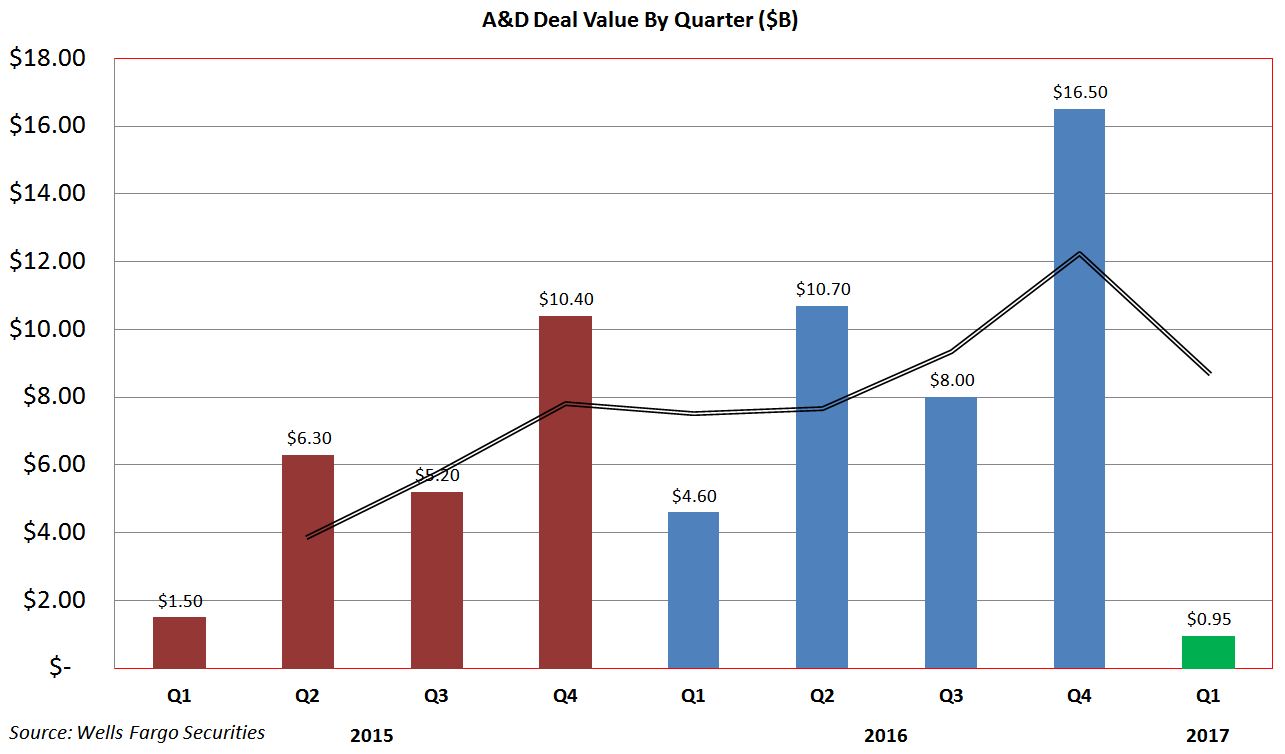 But the Bakken and Eagle Ford are already commanding A&D attention again.

In 2016, even the Appalachian Basin found its footing with 15 deals totaling $6.2 billion in the final three quarters of the year, Wells Fargo said.

In one of the largest deals of the year, Rice Energy Inc. (NYSE: RICE) acquired Vantage Energy LLC’s Marcellus acreage in Greene County, Pa., for $2.7 billion. The deal included rights to the Utica and Barnett shale plays.

“Sellers and buyers are becoming more comfortable on value,” Koutsonicolis said. “That’s going to result in increased transaction activity in the last half of the year, primarily the last quarter of the year.”

Private equity firms that have bought assets during the oil price collapse are also coming up on a two- to three-year hold period on assets.

“So they’re looking to monetize those assets, and you’re seeing more of those assets coming on line in terms of being offered for sale,” he said.

Most of the E&P activity occurring in the Permian Basin is primarily related to its low lift costs. The Marcellus has similarly benefited from low costs.

“The potential across the Marcellus and Utica, the potential is there. Whether there will be a spike in transaction activity, transactions are starting in that activity,” he said. “You’ll see additional activity. I don’t think [the Utica] is going to be ignored.”

“Companies will look to sell producing assets that had been economical when oil sold at $100/bbl, but not as economic at low prices, especially when those assets might be attractive to companies with adjacent existing operations,” Joshi said. “Buyers will make more bolt-on acquisitions to expand their existing footprints, creating cost efficiencies within their focus areas, and sellers will dispose of non-core assets to help them increase liquidity and reduce debt.”

Companies have generally sold “bite size” assets of less than $1 billion, largely in the Permian Basin but also in the prolific Stack/ Scoop plays and the Denver-Julesburg (D-J) Basin and Marcellus Shale.

Other basins may seem more dependent on price uptick. But the Eagle Ford is increasingly viewed by analysts as an area for companies to regroup or lick their wounds after being shut out of the Permian.

“I represent a client that’s private equity backed that’s looked at three different transactions, all of which were very competitive, one was fairly sizeable,” he said. “It’s a multibillion-dollar package of properties by a seller, [in which the] seller is concentrating on Permian and other areas.”

The Eagle Ford is not quite as core for the company, he said.

“Some of the smaller players are probably going to buy off some of the bigger players in the Eagle Ford,” he said. “That’s the thesis of this one company who I’m representing.”

Bengtson said new completion techniques that can be brought to bear in the Eagle Ford and that it is perhaps somewhat behind the curve on frack design.

With 20 deals under his belt in 2016, Bengtson said his buyer clients have had the ability to be consolidators in their basin.

“Many of my clients trying to build land positions so they can drill longer laterals,” he said.

Blocking up acreage gives E&Ps the ability to stretch out efficiencies, drill multiple wells off pads and optimize midstream arrangements as their production increases.

For instance, the Bakken could spark some deals. While it’s largely landlocked, companies appear eager to rid themselves of non-operated positions in order to “control their capital better.”

“I think that even through there is acreage constraint, there is potential for transactions, particularly those involving non operated position,” he said. “People seem to think the Bakken works pretty well in the $50 environment, particularly if you can get some of the midstream issues worked out up there.”

Going into 2017, the energy industry is being pushed by some tailwinds, such as what’s perceived to be a more favorable political and regulatory environment or the OPEC agreement on production.

What that mean is a further opening up of debt and capital markets, which allows more potential buyers — and competition.

“It also probably means there’s fewer motivated sellers, just because we’ve worked a lot of the stress out of the system,” he said.

The industry has already worked through more than 100 bankruptcies as well as companies selling to deleverage their balance sheet.

“From a macro environment, I think I see more buyers, less sellers going into 2017,” he said. “Whether that means more deal flow or less deal flow, I’m not particularly sure. I think there’s clearly more competition now. Because companies that haven’t had the balance sheet to compete on transactions potentially can” do so now.

And whether $50 or $60 oil is here to stay, he said, companies can also access the strip at those prices and put a floor in under their acquisitions.