In the week since our last edition of What’s Affecting Oil Prices, Brent rose $1.10/bbl last week to average $78.49/bbl as WTI rose only $0.42/bbl to average $68.95/bbl. With Brent surprising us slightly to the upside last week we expect current strength to be maintained, despite expectations that new tariffs will be announced this week.

Reports indicate that President Trump could announce new tariffs against China this week. However, in a positive sign, the tariffs would reportedly be 10% against $200 billion worth of goods, versus the 25% originally expected. Given China’s very measured responses so far, Beijing’s next round of tariffs, which is expected to include energy products, would likely also be for less than 25%.

More visibility on the impact of two major storms, Hurricane Florence and Typhoon Mangkhut will come throughout the week. In the U.S., Hurricane Florence likely led to tertiary stock building in PADD 1, and may have slowed inter-PADD shipments, artificially supporting PADD 3 stocks. In Asia, the physical damage caused by Typhoon Mangkhut is still being assessed, but it likely delayed international shipments of crude and product. 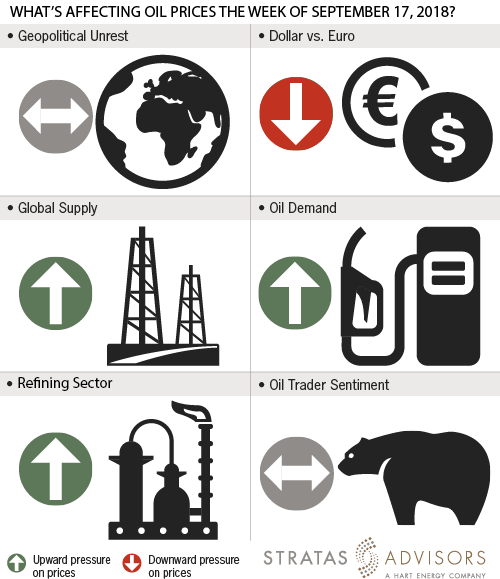