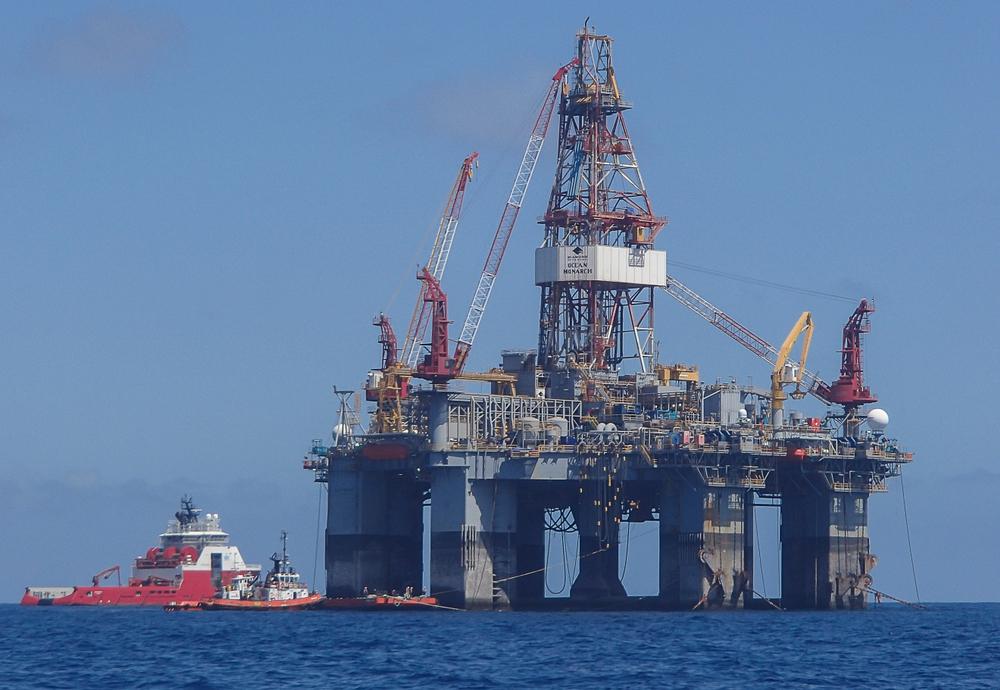 Some 74% of the estimated 3.9 billion barrels of oil equivalent (Bboe) discovered in first-half (1H) 2018 was in ultra-deep water, despite onshore drilling accounting for 57% of the exploration well count, according to analysts at Wood Mackenzie.

Deep and ultra-deepwater accounted for just 16% of the total exploration well count.

Oil majors are leading the charge in part driven by investors wanting to see growth. Exxon Mobil Corp. made the most discoveries in terms of volume in 1H 2018, trailed by Eni, Total, Hess Corp., Nexen, Equinor and Shell. These companies were followed by state-owned Petrobangla, Petronas and CNOOC.

“The oil major’s market share of high-impact exploration is as high as I can remember it,” said Andrew Latham, vice president, research, global exploration, for Wood Mackenzie. “There’s no doubt that the cost environment has made the market more favorable toward deep water, which is now very often more favorable than shale plays, with a sweet spot at US$40/bbl or less.

“That sweet spot is high-quality reservoirs able to deliver 20 million barrels [MMbbl] per development well to keep costs down. Some of the gas finds are above 1 Tcf per development well, so their break-evens are even lower,” Latham continued. “The operators are also looking for places where there is a route to market. It sounds obvious, but when oil was $100/bbl, this kind of discipline was not quite there; there was something of a scattergun approach.”

A targeted approach is paying off for some. 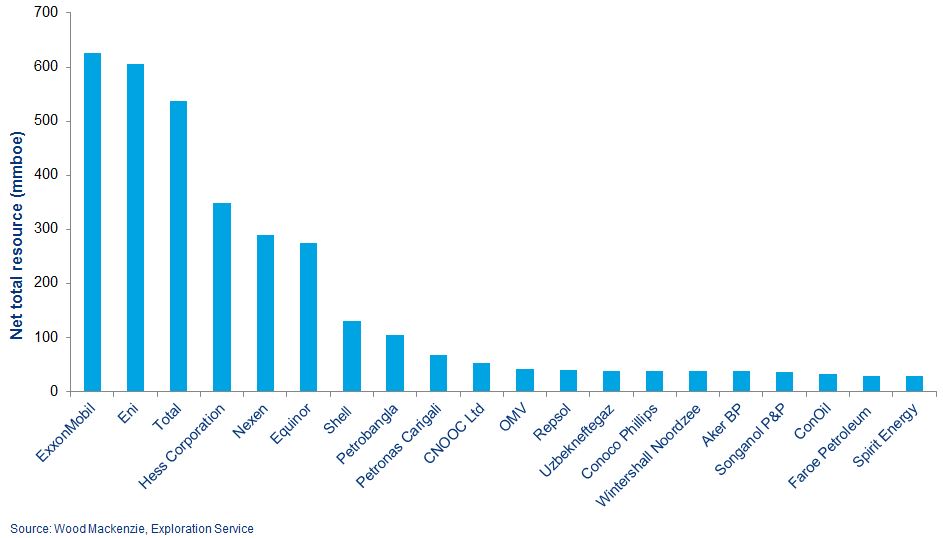 The average discovered volume for an ultra-deepwater well in the first half was just shy of 140 million barrels of oil equivalent (MMboe), compared with less than 25 MMboe for onshore wells, according to data on Wood Mackenzie’s 2018 Wildcat Wells to Watch, compiled by Wood Mackenzie Research Analyst Alex Connelly.

A significant portion of those volumes came from the two largest discoveries in 1H, both of which sit in newly discovered plays. The largest is Eni’s ultra-deepwater Calypso discovery offshore Cyprus, containing between 6 trillion cubic feet (Tcf) and 8 Tcf (1.1 billion boe) of gas, in 1,047 m water depth.

The second largest is ExxonMobil’s Ranger at 500 MMboe. Ranger is one of three discoveries, alongside Longtail and Pacora, made this year by Exxon Mobil in the Stabroek Block, taking the total recoverable resource estimate for the block to 4 billion, according to partner Hess Corp. Ranger marks a new play in the block, proving the carbonate, Latham noted.

Other notable deepwater finds include Boudji and Ivela, offshore Gabon, discovered by Repsol and Petronas, respectively. They are the first discoveries in that part of deepwater offshore Gabon; however, despite being in seventh and 12th place in the 1H biggest finds rankings, respectively, they may not be commercial, Latham said.

One big exploration surprise was in shallow waters. 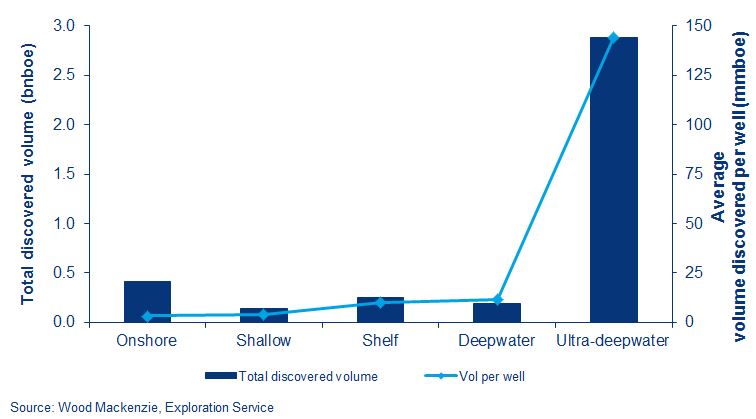 Independent explorer Quadrant Energy’s Dorado well, located in the Canning Basin offshore northwest Australia, was targeting gas in various pockets in just 88 m water depth. But Quadrant, working with partner Carnarvon Petroleum Ltd., found an estimated 100 MMbbl to 200 MMbbl of oil. “If confirmed, this would be Australia’s largest oil discovery in the last 20 years,” Latham said. It would bring the first commercial offshore development to that area offshore Australia.

But there’s still a lot more to play for in 2H 2018. While an estimated 3.9 Bboe was found in 1H, there are 13 Bboe pre-drill volumes estimated to be drilled in 2H.

While deep water remains a theme, there are shallower water wells of interest in Wood Mackenzie’s 2H Wildcats to Watch, including Tullow Oil’s Cormorant well in 550 m water depth offshore Namibia. Cormorant has a 120 MMbbl pre-drill estimate. Success here could finally open the oil business for the country. Many have tried before and companies continue to do so—suggesting they clearly see potential, Latham said. For Tullow, success on this well would also de-risk a number of similar looking prospects in the area, he added.

RELATED: Tullow Looks To ‘Restock’ Portfolio By Stepping Up Exploration

Similarly, Equinor’s shallow-water Gjokåsen well in the far east section of the Barents Sea has two targets, Gjokåsen Shallow and Gjokåsen Deep, with pre-drill estimates of 768 MMboe 428 MMboe, respectively. Siccar Point Energy’s Lyon, located in the U.K. northern North Sea, has a 1.3 Tcf pre-drill estimate, and it could be large enough to form a new gas hub in the U.K., Wood Mackenzie said. BP’s Aspy well, drilling on which has restarted, offshore Nova Scotia, will also test a new presalt play.

Other wildcat wells to watch in 2H 2018 include Pemex’s Yaaxtaab well, which is the first presalt exploration well in Mexico’s deepwater Gulf of Mexico. FAR is also set to drill Samo-1, which will be the first well offshore Gambia in 40 years.

These are interesting times with interesting exploration occurring across basins; however, it doesn’t indicate the industry is going back into a boom, Latham said. Oil companies are making profits and spending on exploration again, but it’s a smaller, more focused industry.

“Most businesses are running on about 70% of the staff they had before,” he said. Exploration costs have broadly halved and the size of the business is about half of what it was five to 10 years ago, “and that looks to be the new norm,” he added. “I don’t think that’s going to change. Most majors are looking to exploration to replace maybe half of what they produce, and that’s a change. Ten years ago it was 100% reserve replacement they were looking for.

“There are fewer but better wells,” he said. “There are fewer companies, but they are more focused on high-quality offshore deepwater plays—the sweet spots where the economics are good. There is still discipline.” 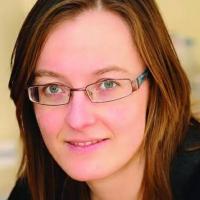 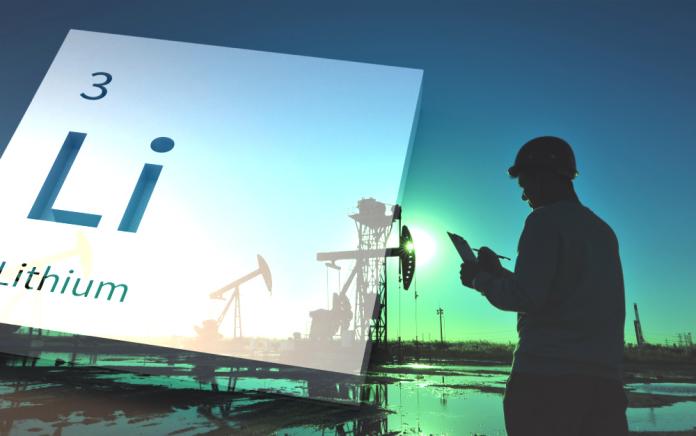 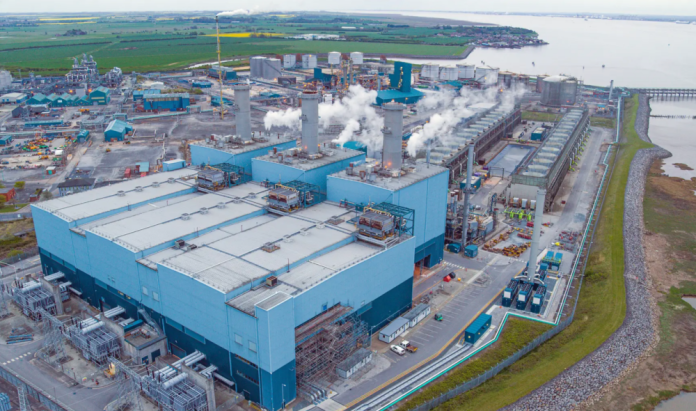