Jason Downie, co-founder and managing partner of Dallas-based Tailwater Capital LLC, has a take on the irresistible topic of the weather—and specifically one of the coldest and deadliest winter storms Texas has seen in decades: Solve it.

In mid-February, temperatures in the state averaged just 11.8 degrees Fahrenheit, caused by an “Arctic air insurgence.” With power knocked out for millions, Texans were left cold, miserable and uncertain. The storm even claimed more than four dozen lives. Downie and his team want to help challenge and solve the state’s power generation shortcomings to prevent this from happening again.

“I hope people view this event as a nonpartisan issue, asking, ‘What really was the root of the problem here?’ The root cause is you can’t have large percentages of renewables on your grid without real redundancy from nonintermittent, reliable energy sources until we have cost-effective battery efficiency to provide the redundancy for renewable fuel sources.”

Downie’s perspective on the need for reliable natural gas can be seen firsthand in Tailwater’s most recent flurry of transactions: the acquisitions of Tall Oak Midstream II and III in January, as well as NorTex Midstream Partners LLC in February. [At press time, Tailwater announced another deal to buy Redcliff Midstream with gas gathering, treating and processing services in Oklahoma’s STACK play.]

And these deals are just a precursor to what he sees as an active year in the midstream space.

Tailwater’s announcement to acquire NorTex, a Houston-based natural gas storage and transportation company with storage assets that serve the North Texas market and Tailwater’s second announcement of the New Year, came just as Texas was warming up from its Arctic deep freeze and at the end of extended and widespread power outages.

While wellhead freeze offs created production shutdowns in the field when temperatures dropped below zero, Downie explained that NorTex’s facilities were able to maintain operations during that time. “The NorTex storage facilities delivered gas reliably throughout the entire weather event,” he said. “It is possible to have storage work effectively even in extremely low temperatures, as long as you have a comprehensive plan and are prepared.”

Tailwater said the NorTex facilities are positioned alongside a high-growth population center that will be reliant on increased amounts of natural gas to sustain reliable power. As more intermittent, renewable power sources are added to the electrical grid, “thermal generation will be critical to deliver power at a moment’s notice,” Downie said.

The Texas Demographic Center’s 2019 projections called for the state’s population centers, including suburban counties surrounding Dallas-Fort Worth, Houston, San Antonio and Austin, to more than double their populations by 2050.

“We think storage serving large growing demographic markets like Dallas or Houston or even San Antonio and Austin make sense,” he added. “But it can be Atlanta or Florida. You’ve just got to have the right geographic and geologic areas for gas storage. And so, for us, why leave Texas? We’ve got it right here. We know this market really well, and this same thesis could carry into other markets.”

The combination of Texas’ rapid population growth and its expected increase in intermittent renewable power generation will not always mesh well. Natural gas will play a pivotal role in filling the gaps where renewable power isn’t quite enough. For natural gas to continue playing a major role, however, there will need to be more storage.

“You’re going to need to have access to functioning storage sites near your markets to support the power generation and, quite frankly, the industrial and residential uses of gas as well,” he said.

Ryan D. Lewellyn, president, CEO and founding partner of Tall Oak Midstream, recalled running into the management team of Oklahoma City-based Connect Midstream at a local restaurant in 2017 on what was probably their first day in business. He wished them well, with little foresight that their portfolios would soon become one.

Connect, a Tailwater portfolio company, launched with a $150 million equity commitment. Since, it built a position of more than 170,000 net dedicated acres in the Arkoma STACK play, constructed a 220 MMcf/d cryogenic processing facility in Coal County, Okla., and seven gas compression facilities, and added more than 180-miles of high- and low-pressure pipelines.

As fate would have it, the operations were adjacent to Tall Oak’s. They even shared an offload agreement. “So there definitely was familiarity,” said Lewellyn.

Tall Oak III, formed in 2017 with an initial equity commitment of up to $200 million from EnCap Flatrock Midstream, operates more than 120 miles of low-pressure and high-pressure pipelines in the Arkoma Basin as well as the Panther Creek Plant, a 200 MMscf/d RSV technology processing plant that moves processed gas to MarkWest’s Arkoma Connector. Tall Oak II’s assets include some 750 miles of gathering lines across eight counties in the Northwest STACK Extension in Oklahoma.

Tailwater subsequently acquired Tall Oak III from EnCap Flatrock and, separately, a majority of assets of Tall Oak II. As part of the transaction, the Tall Oak management team joined Tailwater to operate the combined assets in the Arkoma as well as Tall Oak II’s assets.

However, a combination of assets from separate private equity firms was complex, according to Tailwater’s Downie. “Whenever you’re negotiating with a sophisticated counterparty, it can be a challenge. It was a very well negotiated transaction, and I think both counterparties did a good job of representing their fiduciaries and getting what they needed. It was not easy.”

“We built our team and our assets around operating those assets long term,” he said. “So, we see a lot of synergies when we look at third parties, because we believe we can operate those assets very efficiently.”

The deal was especially tantalizing because of Tailwater’s interest in continuing to expand in the basin, which has largely been upstaged by the flash and cash of other basins, particularly the Permian. These transactions position Tall Oak for long-term Arkoma STACK consolidation, he said—which attracted Tall Oak’s Lewellyn.

While the Midcontinent, like the rest of the oil and gas sector, is cautiously watching the uptick of commodity prices, Lewellyn said he’s optimistic about Oklahoma oil and gas production’s future. The area has demonstrably good rock with a reliable record of production that is more than a century old. There’s also a broader history of basins passing in and out of favor with the industry, including the Permian.

“There are stacked pay zones and, if a producer wants to chase dry gas, those opportunities are there. Alternatively, if they want to be predominantly focused on rich gas, that is an opportunity as well. And then of course, oil,” he said. “So, I think the benefit we have is that our large footprint, both in the Arkoma and on the STACK side, gives us multiple targets.”

Being bullish on the Arkoma and the Midcontinent in general is probably not a commonly held view at this point, he said, but “I would suggest that just like the industry is very cyclical, so are these basins. The producers in the right price environments are going to find the right ways to unlock that rock.”

Tailwater Capital closed a $1.1 billion fund including co-investments at the end of March 2020. While Tailwater could not have anticipated the downturn that 2020 brought, the fund is well positioned to take advantage of a distressed market, Downie said.

“While we didn’t expect a pandemic, we were prepared to see a cycle of consolidation. We believe there’s a lot of pent-up demand globally and believe that a lot of this liquidity that has been pumped into the global system is going to drive demand.

“We think once we get past this pandemic, we’ll see prices strengthen.”

While some private equity firms have invested in solar and wind power generation, Tailwater hasn’t found a project that generates a high enough rate of return for its investors, at least so far, according to Downie. The firm has also explored rare earth minerals and battery manufacturing with the same effect. However, Tailwater continues to be interested in supporting the energy transition—while making money, he emphasized—in areas including gas storage, carbon capture and carbon sequestration.

“The technology to do carbon capture and sequestration in an economic way looks a lot like traditional midstream,” he said. “It’s a pipeline coming off the back side of fixed assets that are generating CO₂, like a processing plant or a refinery or a power plant.”

Tailwater’s view on the energy transition is “for better or for worse, much more foundational. We think there’s a lot of existing types of energy infrastructure that are required to support larger, renewable transition,” he said.

But Downie is not as pessimistic as some institutional investors about the future of hydrocarbons.

“I think there are pockets of value around traditional hydrocarbon infrastructure that are going to be really compelling,” he said. And a few years from now, he hopes Tailwater will look prescient “for taking risks of where prices could go due to the regulatory constraints we’re going to put on the system.”

Tailwater’s focus is on the fundamentals of investing in critical infrastructure for the long-term, he noted. The basics: a fixed asset in a long-term contract with a paying, credit-worthy counterparty and cash flow.

2022-11-18 - Attacks on tankers in Gulf waters in recent years have come at times of heightened regional tensions. 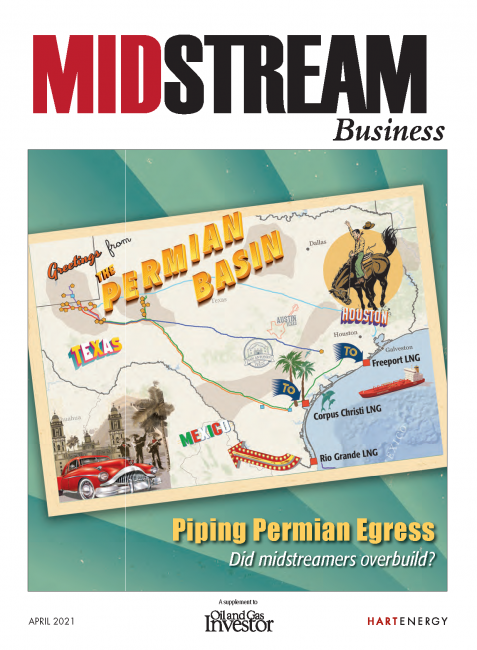