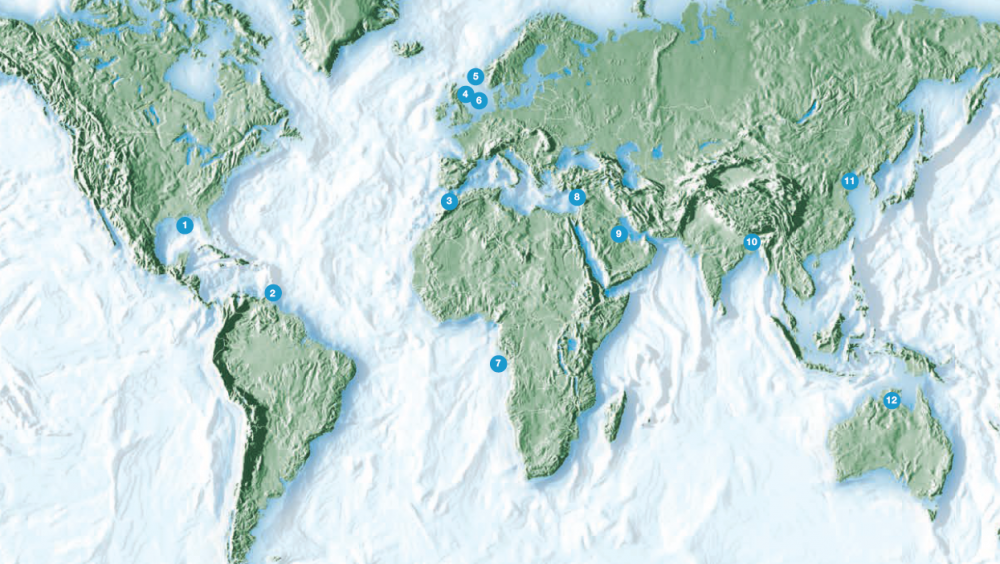 Touchstone Exploration announced production test results from the Cas­cadura-1ST1 well on the Ortoire exploration block. The first stage of flow testing was the lower-most 162 ft of pay in Herrera, which had an IP range of 7,750 to 9,700 boe/d (about 40 MMcf/d to 50 MMcf/d of gas and an estimated 1,100 to 1,400 bbl/d of gas liquids. The second flow test was the upper part of the same horizon with 345 ft of pay, and it had a peak flowback rate of 5.76 MMboe/d, including 29.4 MMcf of gas and 865 bbl/d of NGL. Wireline logs and drilling samples indicated about 1,037 ft of prospective hydro­carbon pay in the Cruse and Herrera formations at depths between 1,030 ft and 6,350 ft.

SDX Energy announced a gas discov­ery at an exploration well in the Gharb Basin. The Beni Malek-1 well was drilled to 1,551 m and encountered commercial quantities of gas in both target horizons (Upper and Lower Guebbas). Based upon results from this well and the previously completed OYF-2 well, the company has de-risked up to 20 Bcf of P50 prospective resources for future drilling of which about 10 Bcf is located in and around Beni Malek-1. SDX estimates that Beni Malek-1 produced about 900 MMcf of gas in Upper and Lower Guebbas and estimated that Upper Guebbas flowed about 400 MMcf of recoverable gas.

Total announced results from a dis­covery at the Isabella 30/12d-11 well in offshore U.K. license P1820. It encountered 64 m net pay of lean gas and condensate and high-qual­ity light oil in Upper Jurassic and Triassic sandstone reservoirs. Addi­tional testing and data analysis are planned to assess the resources and determine the appraisal program required to confirm commerciality.

Equinor completed the 15/3-12 S and 15/3-12 A wildcat wells in off­shore Norway PL 025 in the North Sea. The primary and secondary exploration targets for 15/3-12 S were to prove petroleum in the Mid­dle and Upper Jurassic reservoir rocks (Hugin and Draupne). The 3,352-m well encountered three separate oil-filled reservoir zones of 9 m, 4 m and 9 m in Hugin, which are about 100 m thick. The exploration target for the 3,796-m 15/3-12 A well was to prove petroleum in the Upper and Middle Jurassic reservoir rocks (Draupne and Hugin). The well hit Draupne and Hugin with respective thicknesses of about 85 m and 120 m. No formation tests were performed. Preliminary estimates indicate 1 MMcm to 2.7 MMcm of recoverable oil.

Rockrose Energy is planning to drill the first of two infill development wells on the West Brae Field in North Sea P108 Block 16/07a. The WPGZ-1 and WPOZ-1 wells are designed to access 2P reserves of more than 8 MMbbl and could increase the Brae complex output by up to 6,000 bbl/d of oil. A four-well drilling campaign is scheduled at the Arran gas/con­densate field development.

Eni drilled and tested Agogo-3, the second appraisal well of the Agogo discovery in offshore Angola Block 15/06. Results from the test increased the estimated size of it by about 40% to 1 Bbbl of oil. The test also indicated a production capac­ity of more than 15,000 bbl/d of oil. The appraisal well was drilled to 4,321 m, and it is about 4.5 km northwest of Agogo-1. The Agogo-3 encountered 120 m of net pay in Miocene and Oligocene sandstones. Testing also showed that Agogo-3 is in communication with Agogo-2 res­ervoirs and the further extension of the Agogo discovery to the north.

Total will begin exploration drilling in offshore Lebanon’s Block 4. It will be the first exploration well on the block. The drilling in Block 4 will test the northward extension of Oligocene and Miocene sandstones (Tamar Sands) found in offshore Israel’s Leviathan and Tamar fields. Nearby Block 9 also has a possible reserve in its carbonate limestone formations, similar in geology to offshore Egypt’s Zohr Field and Cyprus’s Calypso prospect.

Saudi Aramco received regulatory approval to develop the Al-Jafu­rah unconventional gas field in the Eastern Province. Al-Jafurah lies between Ghawar Field and Qatar in the ad-Dahna Desert. There are three conventional source rock intervals—Tuwaiq Mountain, Han­ifa and Jubaila—within the basin’s Jurassic petroleum system. The vol­ume of gas resources in the field is estimated at 200 Tcf of rich raw gas, which will provide the petrochemical and metallic industries. The com­pany expects field production to start in 2024. By 2036 it is estimated that about 2.2 Bcf/d of gas could be produced, with about 425 MMcf/d of associated ethane, which is about 40% of the company’s current pro­duction. Aramco also expects the field to produce about 550,000 bbl/d of liquids and condensate.

Bangladesh Petroleum Exploration & Production has discovered a new gas field in the Nabinagar Upazila of Brahmanbaria. According to the company, the primary drilling was at Srikail East-1 in the Srikail East gas field. New production from the discovery will add 13 MMcf/d of gas from the field. The well is producing from an interval between 3,054 m and 3,082 m.

China National Oil Corp. reported a discovery in the Bohai Bay, which is expected to be the first large-sized oil field in the Laibei lower uplift. The KL6-1-3 discovery well was drilled to 1,596 m and encountered oil pay zones with a total thickness of about 20 m. It produced about 1,178 bbl/d of oil during testing. The Kenli 6-1 structure is located in the Laibei lower uplift in the southern part of the basin. Additional survey­ing is planned for the Neogene lith­ological reservoir in the Laizhou Bay region of Bohai Bay.

Empire Energy has received a permit to drill the Carpentaria-1 exploration well in Northern Territory, Australia, in Block EP187. The 2,900-ft vertical venture will test Velkerri Shale at about 2,200 m and Kyalla Shale at about 1,200 m. Empire may perform a vertical fracture stimulation of Velk­erri, similar to the fracture stimulation of a nearby exploratory well, Tanum­birini-1, in adjoining Block EP161, followed by drilling and fracture stim­ulation of a horizontal well section for an extended production test.

For additional information on these projects and other global developments, visit the activity highlights database.