Big Oil has never had it so good, and its immediate priority is rewarding shareholders.

The world’s largest energy companies, including TotalEnergies SE, Exxon Mobil Corp. and Chevron Corp. are ramping up buyback programs despite criticism that they are not moving swiftly enough to increase oil and gas output as high fuel prices pinch consumers worldwide.

That money is increasingly going into shareholder buybacks, which are frequently criticized by investor advocates as a less desirable use of funds than business investment.

Exxon Mobil, Chevron, Shell and Total returned a total of $23 billion to shareholders in the second quarter in dividends and share repurchases, based on Reuters calculations.

Companies are prioritizing returning cash to investors rather than investing in new oil and gas production, and keeping their eye on capital discipline and the long-term shift to low carbon energy.

Chevron boosted its annual buyback plans to a range of $10 billion to $15 billion, up from $5 billion to $10 billion. CFO Pierre Breber said the company plans on maintaining a high levels of buybacks “for a number of years,” even if the investment cycle turns.

He added that the company will continue to pay down debt, and said that it can do that as well as increase output and investment.

Exxon Mobil aims to repurchase $30 billion of shares through 2022 and 2023. Shell said it would buy back $6 billion in shares in the current quarter after buying $8.5 billion in the first half.

The companies are also wary of investor pressure, after years when the oil and gas sector routinely underperformed broad-market indexes. Last year, Exxon Mobil lost an expensive proxy battle against a little-known hedge fund after major institutional shareholders backed a slate of new board members—in part due to the company’s weak returns.

The speed of the economic recovery from the pandemic has caught the energy industry wrong-footed, and shortfalls in supply have been exacerbated by disruptions caused by Russia’s invasion of Ukraine.

This has caused friction with governments that are coming under pressure from voters struggling to pay soaring energy and fuel bills. 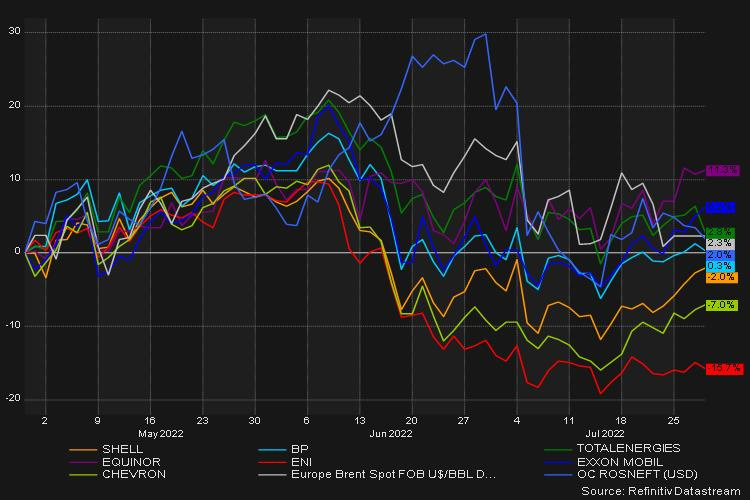 U.S. lawmakers have discussed a similar idea, though it faces long odds in Congress.

Shell CEO Ben van Beurden blamed the elevated energy prices on an investment shortfall of around $1 trillion in recent years as well as pressure on companies to move away from oil and gas toward renewables.

“These [profit] margins are not our doing, they are the doing of how global markets play out,” van Beurden told reporters.

In France, TotalEnergies has reduced fuel prices at its service stations, even as Finance Minister Bruno Le Maire ruled out taxing energy companies.