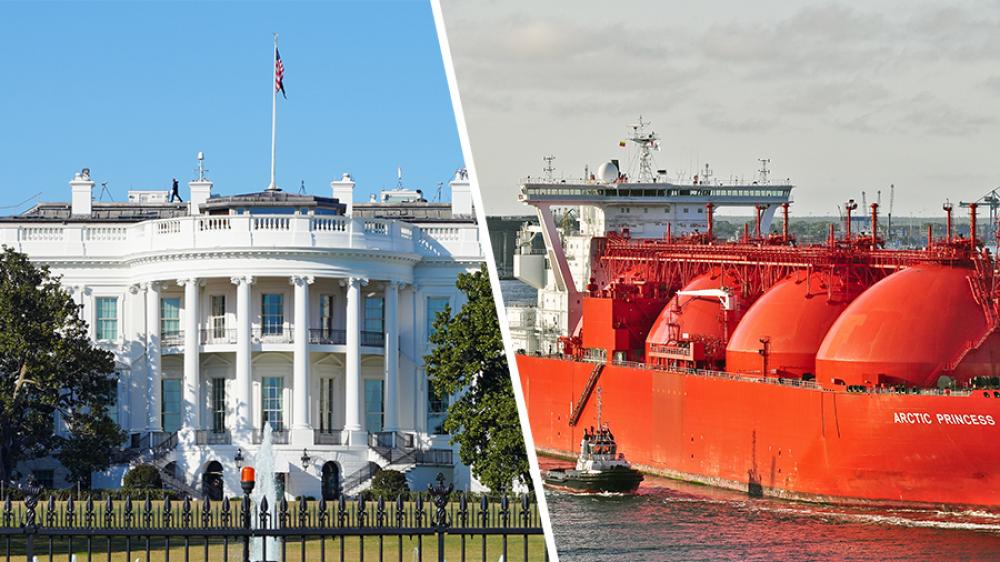 The Biden administration is committed to maintaining LNG exports to Europe this winter. (Source: Shutterstock.com)

WASHINGTON—The White House has ruled out any ban or curbs on natural gas exports this winter, in a bid to help alleviate energy shortages in Europe, according to two people directly involved in the discussions.

In March, U.S. President Joe Biden committed to deliver 15 Bcm more of LNG to Europe following Russia’s invasion of Ukraine and has already surpassed that goal.

Further White House analysis has only cemented support for ongoing exports, the sources said, although rising energy costs and a colder-than-expected winter could test Biden’s commitment. A ban has not been seriously considered, said a U.S. official.

Natural Gas Price Primed to Break Record, Even if Winter is Mild

Biden and his aides are bracing for the prospect that inflation-fatigued Americans will pay high home-heating bills this winter. Inventories of natural gas, the nation’s primary heating fuel, are at historically low levels after U.S. companies exported record amounts to Europe in recent months to counter a cut in supplies and higher prices for European power plants.

But that analysis only cemented a consensus that such a move would be too extreme and fracture key relationships with allies in Europe.

The issue has taken on new significance in recent weeks as the White House has threatened petroleum refiners they could stop them from exporting fuels like gasoline and diesel unless domestic inventories rise.

“President Biden made a commitment in March and we have been moving out on it. We surpassed the LNG export goal President Biden set,” said a senior administration official, who pointed to 30 Bcm in U.S. LNG exports to EU since early March, double the same period last year.

“And because of the steps we and our partners have been taking, gas storage in Europe is at a significantly higher level than last year. More work remains,” the official said.

The average cost of U.S. home heating is expected to rise 17.2% from last winter to $1,202, putting millions of low-income families at risk of falling behind on their energy bills, according to a recent report by the National Energy Assistance Directors’ Association (NEAD).

The price of natural gas, which heats about 50% of U.S. households, is expected to increase about 34% compared with last year, and up 66% from the winter of 2020-2021, the report said. Some power companies that rely on natural gas in the U.S. Northeast are warning consumers that electricity bills could soar by 60% this winter.

“(U.S.) natural gas prices would plummet, but if I were the EU, I would almost consider (a ban) an act of war. It would really stoke anti-American attitudes and make European countries question the strength of their relationship with the U.S.,” said Ed Hirs, an energy economist at the University of Houston.

The U.S. banned crude oil exports for four decades in the name of consumer protection until President Barack Obama and Congress lifted the restriction in 2015.

Biden has sought to leverage the country’s vast supply of natural gas to forge stronger ties with European allies in the wake of Russia’s invasion of Ukraine and the subsequent upheaval in global energy markets. Biden and European Commission President Ursula von der Leyen announced a plan to form a task force to cut Europe’s reliance on Russian fossil fuels.

Russia, the world’s second-biggest gas producer, has provided about one-third of Europe’s gas in recent years, but a major pipeline that runs from Russia to Germany was badly damaged in what European and U.S. officials have described as sabotage. This summer, the EU urged member states to cut gas usage by 15% until March as an emergency step.

Gas stockpiles in northwest Europe—Belgium, France, Germany and the Netherlands—are currently about 6% above their five-year (2017-2021) average for this time of year, according to Refinitiv. Storage is around 91% of capacity.

That is much healthier than U.S. gas inventories, which are still about 9% below their five-year norm, despite record production due to export demand.

If the U.S. fall and winter are colder than expected, low inventories will drive up prices and could reignite calls from U.S. lawmakers, including influential Sen. Elizabeth Warren (D-Mass.), to curtail natural gas exports.

U.S. natural gas prices are far lower than global prices because the United States is the world’s top producer.

“Americans for years enjoyed low price natural gas,” said Mark Wolfe, head of NEAD. “I am afraid that era is now over.”