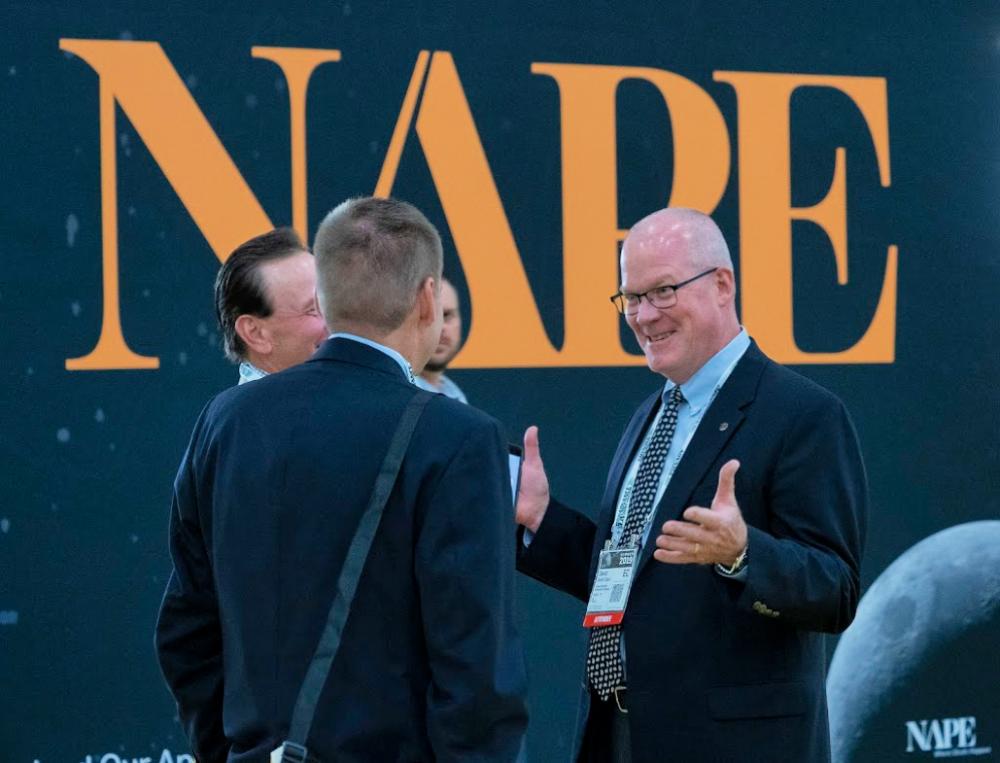 Attendees on the show floor at the Summer NAPE Expo 2019 conference at the George R Brown Convention Center in downtown Houston on Aug. 21. (Source: Todd Buchanan/NAPE)

HOUSTON—Mirroring upstream A&D market trends so far this year, the mood at Summer NAPE could be summed up in one word: subdued.

The annual expo focused on the buying, selling and trading of oil and gas prospects attracted more than 2,500 oil and gas professionals to the George R. Brown convention center in downtown Houston on Aug. 21-22. Across the board, the number of attendees and exhibitors at this year’s Summer NAPE dropped from the previous year, but so has deal flow.

Rex Stahla, an exhibitor, agreed that this year’s Summer NAPE had a different atmosphere. He told Hart Energy that his company, Woodbury Resources LLC, has also seen a recent slowdown in deal-making.

“That’s what we’re seeing,” said Stahla, who has been coming to NAPE for roughly six years. “Money is tight.”

Despite Occidental Petroleum Corp.’s multibillion-dollar takeout of Anadarko Petroleum, A&D activity for upstream oil and gas companies has been on a decline. For example, a recent report by GlobalData found that deal flow across the industry had slipped in July.

The London-based data and analytics company recorded a total of 44 M&A deals in the U.S. oil and gas sector last month totaling $9.89 billion. Deal activity for July marked a decrease of 6.4% over the previous month and a drop of 34.3% over the 12-month average.

Still, Stahla said to successfully do a deal, “you just need the right person.”

At the conference, Woodbury Resources was marketing its North Park Basin position in northern Colorado. The acreage is overlying the basin’s overpressured oil window and also offsets activity by SandRidge Energy Inc.

“We have a lot of people looking at it. It has gotten a lot of interest,” he said adding: “Good deals get looked at.”

Though, according to NAPE, numbers for its summer event were down. The crowd of 2,500 attendees was about 300 less year-over-year. The number of exhibitors at the expo also dropped to 185 from 225 the year prior.

“This is kind of a light crowd, it seems like to me,” Dexter Harmon, exploration manager for Fasken Oil and Ranch Ltd., told Hart Energy. “A lot of empty booths here and stuff that I don’t remember in the past. I don’t think they’ve sold it out like they have in the past.”

Harmon, who has only “missed a few” NAPE expos since its launch in the early 1990s, said regardless of the crowd size he’s always seen a benefit in coming to NAPE.

“You see absolutely everybody you need to see and you hear about little deals walking around,” he said.

In particular, Harmon noted the amount of people at NAPE from Midland, Texas, where Fasken Oil & Ranch is based and also the epicenter of the prolific Permian Basin.

Harmon also added that he prefers the intimacy of Summer NAPE compared to NAPE Summit, the larger of the two expos which annually runs in February. This year’s NAPE Summit hosted about 12,360 attendees, roughly 80% more than the group’s summer event.

“It’s crowded and it’s hard to get up and down the aisles and see everyone there,” he said of NAPE Summit. “But [Summer NAPE], pretty much, I talk to everyone that is here.”

Going into Summer NAPE, Ryan Childs, principal of Production Lending LLC, said his firm—one of the few capital providers exhibiting at this year’s expo—knew the crowd would be a little bit smaller than in previous years.

“While that was true, we also found that the quality of conversation was actually quite high,” Childs told Hart Energy.

Founded in 2016, Production Lending is a Houston-based specialty finance capital provider catering to small oil and gas companies. The firm focuses on deals less than $10 million in size. Since its launch, Production Lending has funded 16 different transactions for a total capital commitment of more than $35 million, according to a company release in July.

Childs, who also presented during the NAPE Capital & Service Provider previews on Aug. 22, said Production Lending chose to exhibit at this year’s expo because it gave them the opportunity to tell smaller E&Ps that there are options.

“Given the climate of where we are today, we obviously understand that a lot of capital has been pulled away from the larger players in the industry, but that’s also affected the smaller companies too,” he said. “I think it’s important for a lot of these companies to be aware that there are still capital providers out there that are willing to support U.S. onshore conventional deals.”