There are many sources of microbial contamination during the hydraulic fracturing process as fracturing fluid passes from the surface into the downhole environment (Figure 1). Microbial growth negatively impacts production rates, asset integrity and hydrocarbon quality, making an integrated microbial control program essential for smooth operations and optimal return on investment. Compounding these challenges, completions engineers have one chance to select the most effective biocide program for their well. The following is a deeper dive into biocide efficacy, strengths and weaknesses, and selection strategies to optimize system and shale compatibility.

Although biocides make up a small amount of fracturing fluid, they play a critical role in maximizing productivity and reducing operational costs over the lifetime of a well. Biocide selection must always be based on the specific application conditions of each phase of the hydraulic fracturing process (Figure 2). Phases can vary significantly in terms of temperature, salinity, aerobic/ anaerobic conditions, shale type, additive compatibility and desired duration of control.

During preparation of the water topside before it is injected into the well, an abundance of microorganisms often are present due to natural nutrients and/or the use of recycled produced water. Treating this water with quick-kill biocides, such as 2,2-dibromo-3-nitrilopropionamide (DBNPA), will decrease the initial bioload and enhance biocide performance used in later stages of the process.

Biocides also are necessary during the well decontamination phase to control organisms introduced during drilling and completion activities. This is best accomplished using chemistries such as glutaraldehyde or glutaraldehyde/ quat blends to provide microbial control for several weeks during drillout and IP.

Reservoir protection biocides, which must remain effective for long periods and under extreme heat and salinity conditions, are vital during the final phase of hydraulic fracturing as organism growth can cause formation damage and produce H2S over time. Dimethyl oxazolidine (DMO) and tris(hydroxymethyl)nitromethane (THNM) are examples of biocides that remain efficacious in the downhole environment, and they can delay or reduce souring and corrosion over a period of months.

Biocide selection based on the different phases of the hydraulic fracturing process is only a start. Operators interested in maximizing the benefits of their integrated microbial control program must consider compatibility with proppants, friction reducers and other fracturing fluid additives. For example, the trend of using greater volumes of proppant increases the potential for microbial contamination from the proppant itself.

Diverse biocides and dosage levels are required to both decontaminate the well and protect the reservoir. Many hydraulic fracturing operators have learned that although inexpensive options like chlorine dioxide (ClO2) and tributyl tetradecyl phosphonium chloride (TTPC) are effective as quick-kill biocides during topside preparation of the water to reduce bioburden, they will not decontaminate the well or protect the reservoir.

There is also an increasing amount of slickwater fractures in use today, so operators need to know that cationic surface-active chemistries such as TTPC often are incompatible with anionic friction reducers, like hydrolyzed polyacrylamide. It also is critical to understand that glutaraldehyde is incompatible with the primary amines found in some corrosion inhibitor additives, and that oxidizers such as ClO2, are highly reactive with many fracturing fluid additives and other organics.

Oilfield biocides have been studied extensively in relation to compatibility with other fracturing fluid chemicals, but much less effort has been dedicated to understanding biocide compatibility with the reservoir shale itself. Recognizing that shale can have a significant impact on both microbial growth and biocide efficacy in the downhole environment, Dow Microbial Control recently designed and performed an extensive study to evaluate biocide performance in the presence of shale formation rock. The following is a summary of one portion of that study. 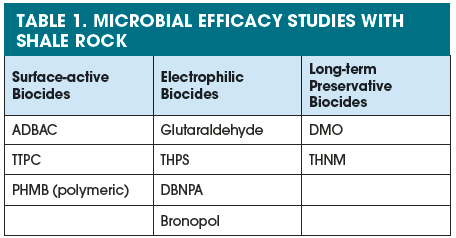 Rock and bacteria were placed together to closely mimic actual oilfield conditions during the well decontamination and reservoir protection phases. Biocide efficacy was compared in the presence of shales from three different plays: Mancos, Marcellus and Barnett. Biocide efficacy was tested at 4 hours to represent biocidal action while decontaminating the well as well as after seven days to represent longer-term protection of the reservoir (Figure 3). 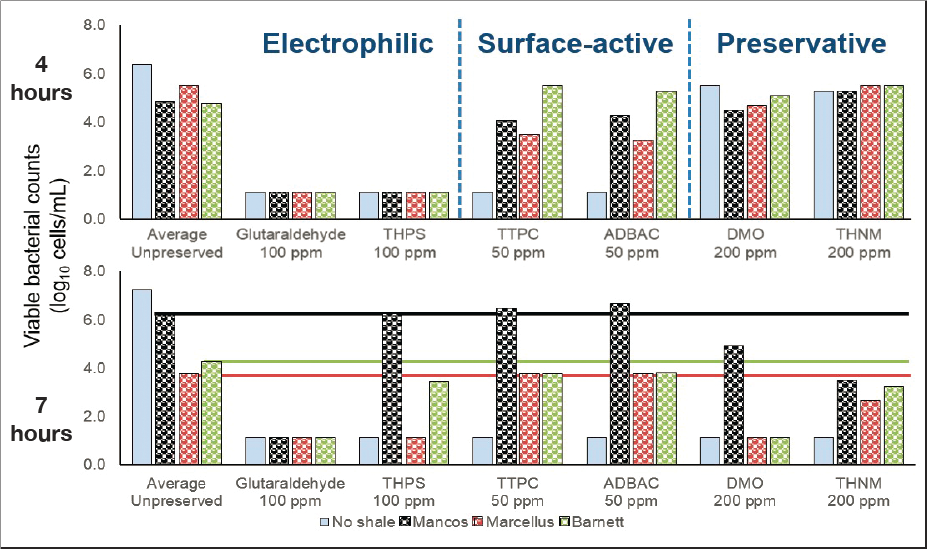 As shown in Figure 3, after 4 hours decontaminate biocides, such as glutaraldehyde and tetrakis(hydroxymethyl) phosphonium sulfate (THPS) remained fully effective, independent of the presence or type of rock. The surface-active, quick-kill biocides— TTPC and alkyldimethylbenzylammonium chloride (ADBAC)—were adsorbed onto the rock and completely lost efficacy after 4 hours. As expected, slow-acting preservative biocides, DMO and THNM, required more than 4 hours to be effective.

These studies demonstrate that shale compatibility is an important consideration when selecting an effective biocide to control organisms in the downhole environment. In the presence of shale, surface-active biocides—ADBAC and TTPC—show reduced availability in the aqueous phase, resulting in loss of efficacy against planktonic bacteria. There was no effect of the shale or the shale type on efficacy of electrophilic biocides—glutaraldehyde, DBNPA and Bronopol—but there was some shale-dependent loss of efficacy with THPS. Long-term DMO and THNM preservative efficacy was entirely dependent on the shale type.

There are a wide variety of biocides available to protect hydraulic fracturing operations from microbial growth, and they all have strengths and weaknesses. Biocide selection begins by understanding overall efficacy during the three phases of hydraulic fracturing:

Beyond their fracturing phase efficacy, optimal biocide selection depends on compatibility with fracturing fluid additives, such as friction reducers, proppant, type of shale, pressure and temperature resilience, and/or the blend of fresh and produced water being used.

The bottom line is that there is no “silver bullet” biocide capable of handling every phase of the hydraulic fracturing process in tandem with other fracturing components or different shale plays. Biocide selection is not as simple as checking a box, but microbial control suppliers can simplify matters considerably as operators create and optimize a cost-effective, profit-protecting and integrated microbial control program.