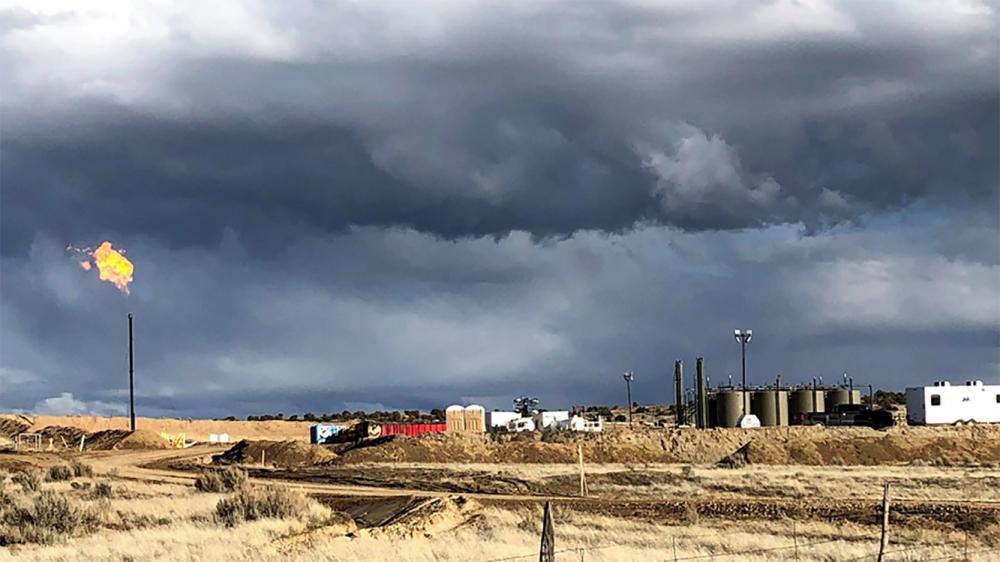 Gas is flared from a shale well in New Mexico. The state has enacted some of the country’s toughest regulations intended to curb flaring. (Source: Ian Palmer)

Production of shale oil and shale gas during the shale revolution, which began around 2000, has boomed and led to cheap gasoline, aircraft fuel, home heating and plastics. The U.S. became self-sufficient in oil and gas for the first time since 1947. Cheap oil and gas has boosted U.S. manufacturing and the U.S. economy, and exports of oil and gas technology have helped lift underdeveloped nations out of energy poverty.

But in the rush to expand the drilling of new shale wells, some things were overlooked: flaring of natural gas and methane leaks from wells, pipelines and processing facilities.

Venting is when gas sources are deliberately opened to release gas into the atmosphere (for instance, if no storage tank or pipeline is available), while flaring is releasing the gas while it’s burning (for example, wells seen with large flares above them glowing in the night sky).

Another source of emission is leakage from wellheads that produce the gas. Leaks from wellheads are usually very small. But there are 1.7 million active oil and gas wells across the country that can amplify this greatly.

Yet another source is leakage from pipelines that deliver the gas to markets. Most individual leaks are very small but a few big ones can really distort the picture. And tens of thousands of small ones in wells and pipeline miles adds up.

Pneumatics, which are devices that contain gas under pressure, are a big contributor to leakage.

Why should the industry make a point of resolving these issues?

First, there are new regulations. To repeal rules installed last September, the U.S. Senate recently passed a bill cracking down on methane leaks as a cause of air pollution in oil and gas operations, and allow the U.S. Environmental Protection Agency (EPA) to enact stricter methane regulations.

Second, it’s in the industry’s best interests. Flaring refers to natural gas that has no container or pipeline to be put into, and so the burning gas is released to the atmosphere. Part of the motivation in the Permian is to enable the operator can make better money by continuing to pull up and sell oil that comes up the well along with the gas.

The natural gas that is flared is wasted gas, and by one estimate, the U.S. loses more than $2 million every day in this manner.

Methane leaks vary from less than 0.5% to 5% when expressed as a percentage of the gas that passes through the pipe that leaks. In a country that produces 100 billion cubic feet per day (Bcfd) and sells it for $3 per thousand cubic feet (Mcf), a methane loss of only 1% clearly affects the bottom line and stopping the leaks makes practical business sense.

The Delaware Basin in southeast New Mexico has been a hotspot for flaring and methane emissions, and this has led the state to install new regulations that may be the strongest in the U.S.

The Delaware Basin contains an ocean of oil. In late 2018 the United States Geological Survey (USGS) came up with an assessment of 46 billion barrels of recoverable oil, plus 281 trillion cubic feet of natural gas.

The immense quantities of oil and gas in the Delaware make up the largest deposit of oil and gas ever documented by the USGS in the U.S. It is the nation’s premier energy play with some of the largest recoverable reserves in the world.

Many of New Mexico’s oil and gas companies—there are over 50 of them—pump a total of about a million barrels of oil per day from the Delaware basin. This is worth an astonishing $24 billion per year at the wellhead.

About 18,000 direct jobs are part of the oil and gas scene in New Mexico, with perhaps 100,000 New Mexico jobs that are supported by the industry.

Oil and gas provides typically one-third of the state revenue. But the recent oil boom in southeast New Mexico has generated a $1.2 billion in state budget surplus from taxes on new production.

The Environmental Defense Fund (EDF) has measured methane emissions across New Mexico by satellite, which is coordinated with ground-based detectors. The organization’s report, updated in November 2020, found:

New Mexico’s Environmental Division (NMED), working with the EPA, used infrared technology in helicopter flyovers of the Delaware and San Juan basins to measure methane from oil and gas operations in 2020. With this technology plumes of emissions can be seen with the naked eye.

These flyover results are consistent with EDF measurements, according to Jon Goldstein, the organization’s director of regulatory and legislative affairs.

Finalized in March 2021, New Mexico released perhaps the strongest requirements in the U.S. for natural gas capture from oil and gas developments, both upstream and midstream, e.g., pipelines and gas-processing plants.

Finally, a coalition of 16 natural gas companies, called Our Nation’s Energy Future (ONE Future), was formed in 2014 to address methane leakages. It includes upstream, midstream and downstream operators across the U.S. These companies have invested in reducing methane emissions by repairing system leaks in many different sectors: production, distribution, transmission and storage, processing and gathering.

For both flaring and pipe leaks, another serious aspect is the wasted gas that is released to the atmosphere and adds to the greenhouse gas problem. It’s more serious for pipe leaks because methane has 21 times the warming effect of CO2.

However, methane emissions are only 10% of all GHG emissions in the U.S., and less than half are due to methane leaks. So if the cleanup gets it down to zero, this is a drop of only 5% of the total 73% fossil fuel source. Flaring amounts to less than half of the methane leak contribution. Flaring and methane emissions are not very significant in reducing the 73% GHG problem due to fossil energy.

One way to fix this is to capitalize on the net-zero concept by using carbon capture and storage (CCS) to bury huge volumes of excess GHG that are still being emitted by uncut U.S. production of oil and gas.

A more direct way is for oil and gas companies to diversify and reduce their oil and gas production. BP has pledged to be 40% invested in renewables by 2030. TotalEnergies has since 2016 invested $8 billion in renewables. Shell in Germany will provide 10 MW of green hydrogen and, in Ireland, will be a 51% stakeholder in a 300-MW wind farm.

If President Joe Biden’s two goals of electrification of power plants and cars are met, a simple calculation shows that oil and gas production will fall by about 30% by 2035-2040. This assumes supply cuts follow demand cuts.

Finally, the world needs to address a “production gap” in 10 countries that reveals oil and gas overproduction of 2% per year by most large oil companies when they should be cutting back by 6% per year to meet the Paris Agreement of 1.5°. BP and Shell are rated as doing the best.

A petroleum engineer and consultant, Ian Palmer, Ph.D has worked at Los Alamos, the Department of Energy, BP and Higgs-Palmer Technologies. He is a contributor to Forbes.com and the author of “The Shale Controversy.”