Ethane prices experienced a noticeable dip at both the Mont Belvieu, Texas, and Conway, Kan., hubs this past week following supply disruptions out of the Gulf Coast due to Tropical Storm Imelda. According to reports, heavy rainfall from the storm saw ethane cracking fall by about 150,000 to 200,000 barrels per day (bbl/d).

According to En*Vantage, ethane prices may experience more price swings in the months ahead because of delays in getting new crackers online. "The impact of [Tropical Storm] Imelda was another example of how disruptions in ethylene plant operations can cause a downturn in ethane prices and it highlighted the fact that current ethane balances are fragile," the firm said in its Sept. 25 Weekly Energy Report. 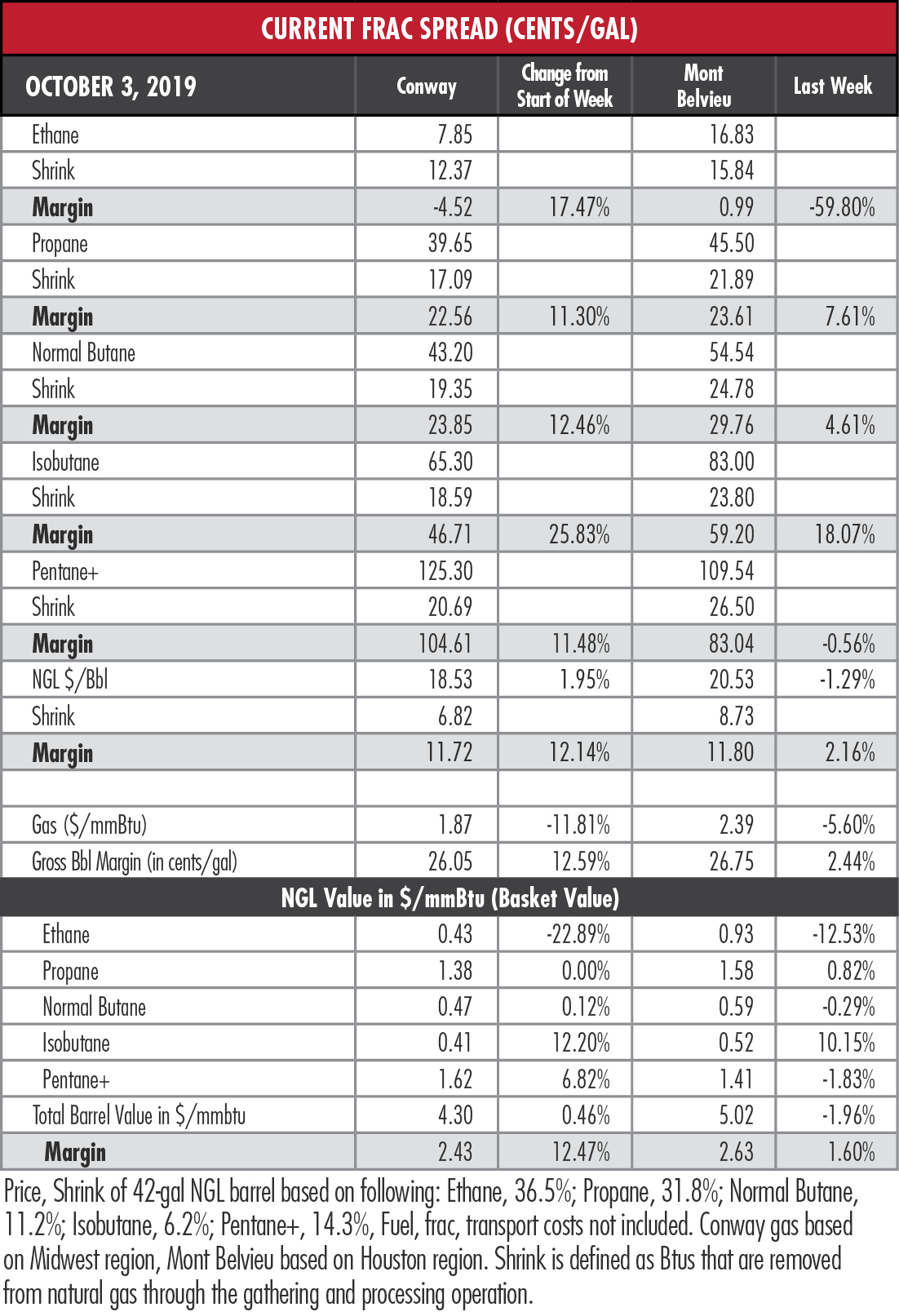 Despite record high levels of ethane rejection, Gulf Coast ethane inventories are very high and will continue to grow as about 225,000 bbl/d of new fractionation capacity will be brought online in the fourth quarter.

The good news for the ethane market is that help is around the corner with the new Shintech, Formosa, Indorama and Freeport crackers coming online by the end of the year. These facilities, along with a ramp up in cracking at several other crackers, will increase domestic cracking capacity by about 350,000 bbl/d. The flip side is that even with this additional capacity, forecasts are for ethane prices to top out at about 25-30 cents/gal.

Propane prices held firm at both Mont Belvieu and Conway at about 40 cents/gal in Kansas and 46 cents/gal in Texas. This price stability occurred despite the U.S. Energy Information Administration reporting that propane stocks were down last week. However, most of these decreases were in the Midcontinent and the East Coast with stocks increasing along the Gulf Coast, which are nearly 60% higher than at this time last year.

"Stock changes in the Midcontinent and East Coast at this time of year should have very little impact on propane prices at Mont Belvieu. But surging propane stocks on the Gulf Coast are depressing Mont Belvieu propane prices, which remain around 33% of WTI crude oil despite lower production and exports out of Saudi Arabia," according to the En*Vantage report.

The firm anticipates propane to continue to trade below WTI because of the large storage overhang and a likely decrease in LPG export capacity as Enterprise Products Partners works to expand export capacity from its Houston Ship Channel terminal. Past expansions at this terminal have resulted in decreased exports as a result of necessary tie-ins and other work. 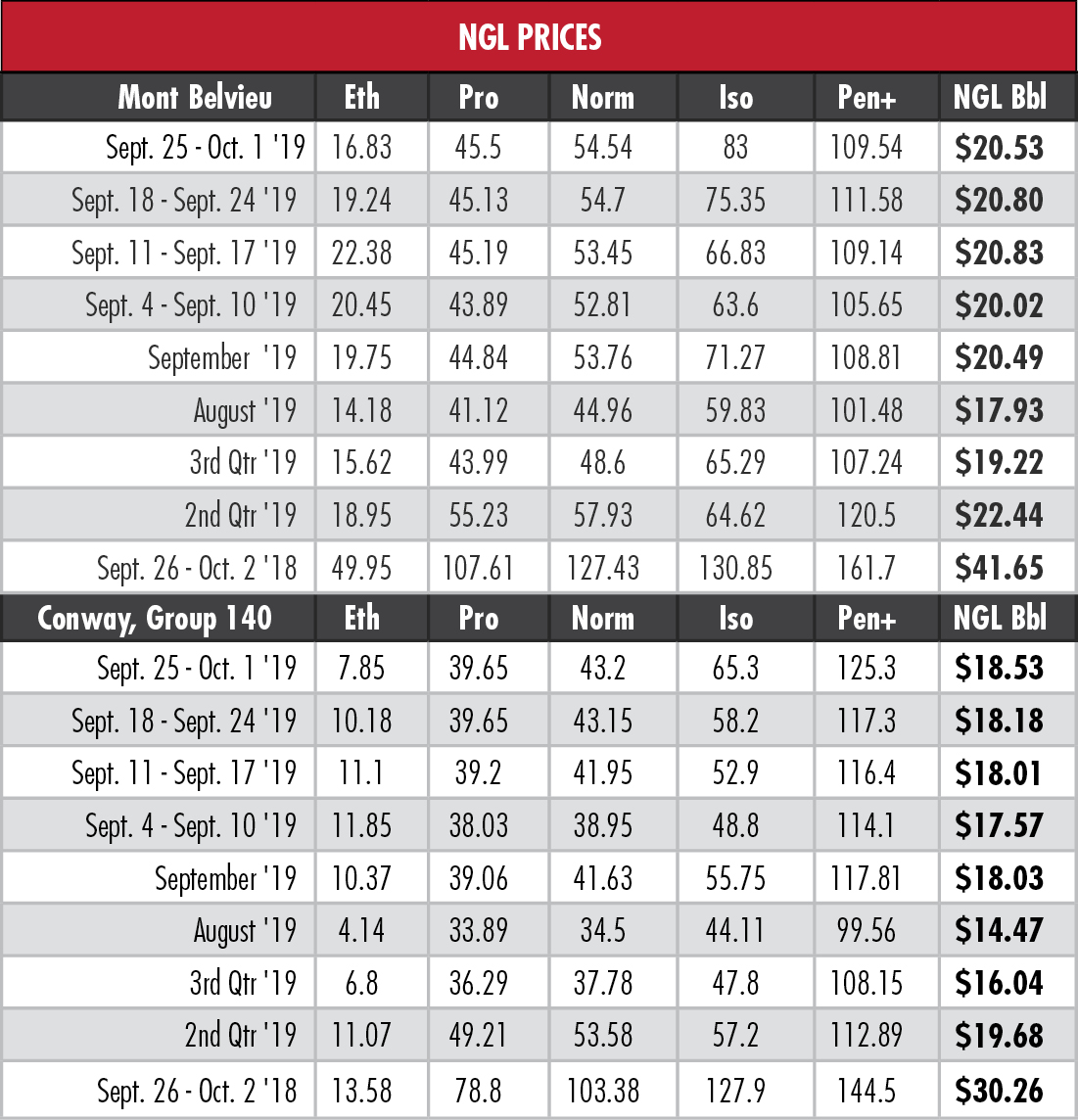 Heavy NGLs showed some strength this week with isobutane hitting its highest price at Mont Belvieu since March. Given the lack of gasoline demand, the likely cause for this spike is downtime at Enterprise's butane isomerization complex.

While heavy NGLs had some strength, the same couldn't be said for crude oil, which fell to their lowest levels in two months. WTI was down to $52.64/bbl and Brent fell to $57.69/bbl on Oct. 2 as a result of economic uncertainty, increasing U.S. stock levels, and the likely rapid return of Saudi Arabian crude production to the global market. 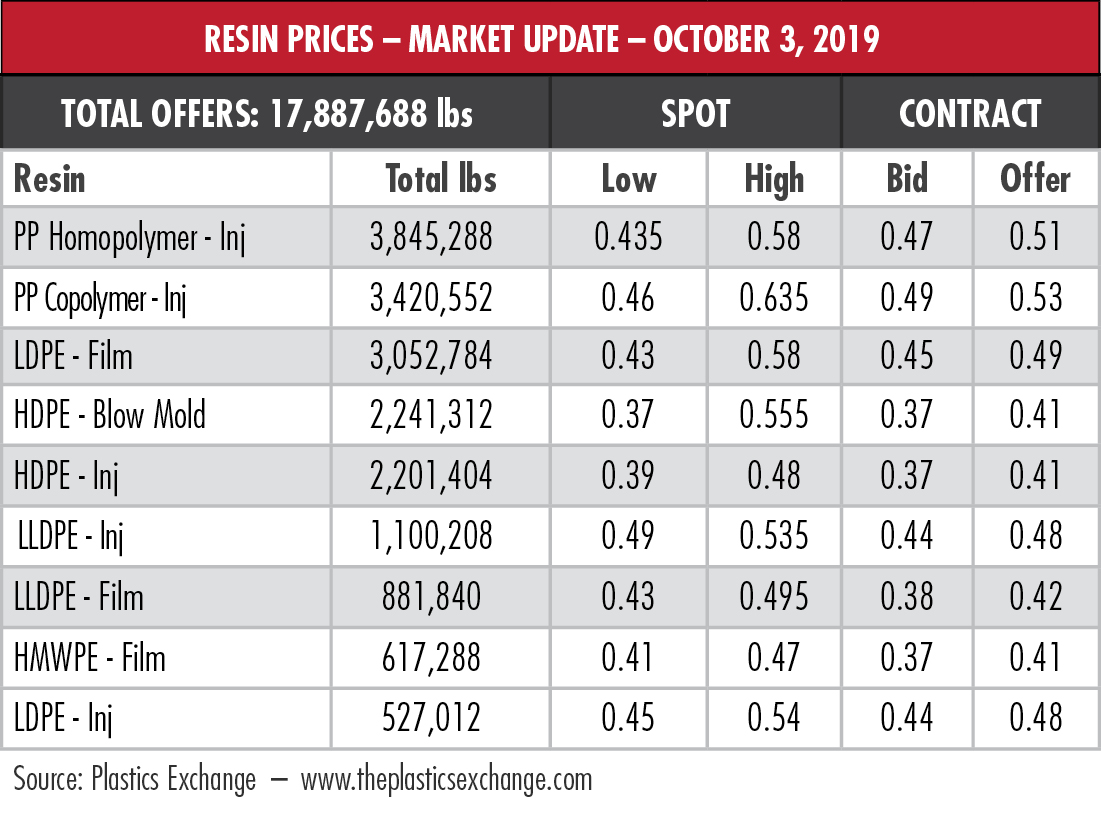 Cooling demand is expected to remain well above average for this time of year in some parts of the country according to the National Weather Service’s forecast for the coming week. Temperatures are expected to be well above average from the Mid-Atlantic along the East Coast and into the Gulf Coast. However, the rest of the country can expect to experience more normalized temperatures.