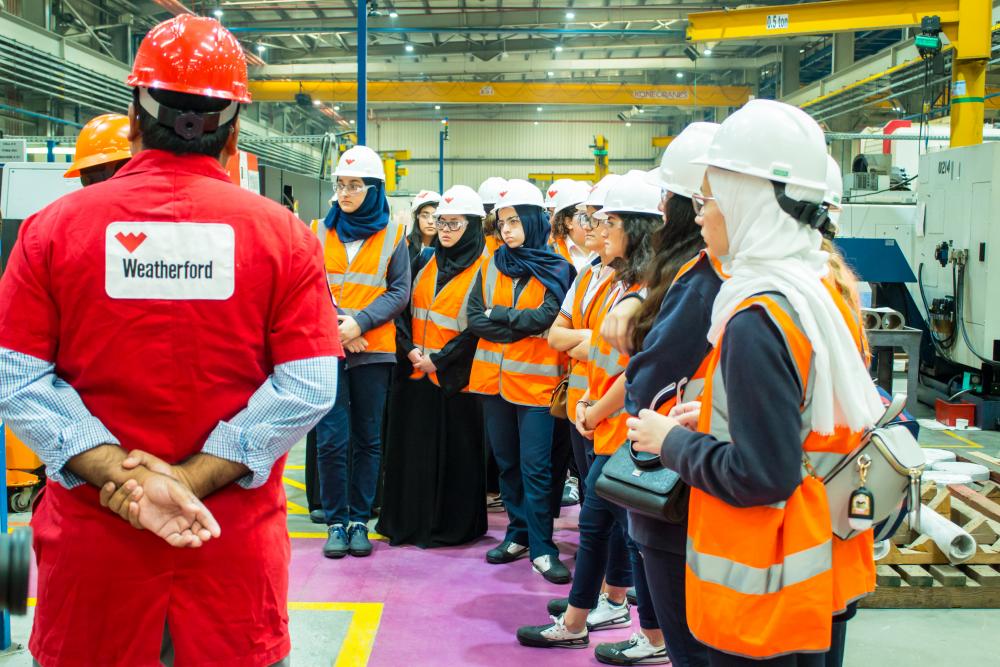 Earlier this year, Weatherford signed an agreement with the Leading National Academy to sponsor the training of young Saudi women in different vocational disciplines aligned with the Kingdom’s goal for its 2030 Vision framework. (Source: Weatherford)

Nearly three years ago, Weatherford welcomed a new president and CEO who immediately set to work transforming the global company culture with a focus on redefining the company’s mission and core values. It was a necessary first step. With a strong foundation of diversity and inclusion (D&I), the company set the stage for more collaboration with both employees and customers, greater productivity and higher profitability. It was not, and never will be, enough to passively claim Weatherford as a diverse and inclusive organization. Since 2017, the company has tracked its D&I performance to statistically assure it moves tangibly beyond tired buzzwords and physically creates a quantifiably improved mix of global talent in the field and office.

Creating a culture of accountability

From the beginning, the company’s challenge was implementing and sustaining a vision of D&I that would become a self-perpetuating company culture rather than a trend. A culture of accountability, starting with its leaders, was built. In doing so, the company began the steady climb to becoming an inclusive and diverse organization that would stand out.

To be sure, the company’s managers were on the front line in its war to eradicate the oil industry’s old-guard culture. The key to effective and successful employee buy-in was honest and transparent employee-manager engagement that would become a bridge from implantation to behavior to, eventually, a new diverse and inclusive company culture. From the initial ideation, managers were the organizational cornerstones with the credibility to provide support for employees to contribute knowledge, insights, perspectives and concerns.

Managers were tasked with implementing scheduled check-ins with their charges in a way that tangibly showed interest, care and availability to each employee to whom they were responsible. They asked and answered hard questions: Did the employees feel comfortable to the point they would share whether or not they felt valued and empowered to contribute, regardless of the size of the project, or did they feel marginalized and undervalued? Did their manger do an adequate job of charting a path for the employee’s career growth and increasing responsibility?

A significant portion of the new culture was predicated on casting the right shadow. That is, employees assume the characteristics of their leaders. For that reason, the vision and mission of a successful D&I program hinged heavily on its direction and adoption by upper-level managers as well as the company’s C-suite. Training and assessment equipped and empowered leaders at both levels to cast the shadow needed for the Weatherford organization to thrive.

Once Weatherford had the cultural structure and highest-level buy-in to support its D&I initiatives, the company engaged its employees at all levels. Internally, the company developed a network to support the organization in aspects of both visible and invisible diversity. Several groups were developed: Women of Weatherford network, Young Professionals, Gay and Lesbian+ of One Weatherford, and Vet Net. Participation from all employees was encouraged, so they recognize, appreciate and support the differences and similarities that make Weatherford a stronger organization.

With a commitment to positively impacting the communities in which the company operates, Weatherford launched a global program called WISE (Worldwide Initiative Supporting Education), where educational opportunities are afforded students in STEM, with a strong focus on encouraging young girls and underrepresented populations. The touchstone is an introduction to industry professionals, with opportunities for externships and the ability to access the company’s facilities and events in local communities. Plans are underway to launch WISE in the Permian Basin and for an internal Saudi Women of Weatherford Chapter, a regional network of women supporting women where none previously existed.

During the recent 2020 in-Kingdom Total Value Add (iktva) Forum and Exhibition in Dammam, Saudi Arabia, Weatherford signed an agreement with the Leading National Academy to sponsor the training of young Saudi women in different vocational disciplines aligned with the Kingdom’s goals for its 2030 Vision project. The collaboration reaffirms the company’s commitment to the localization program as well as its commitment to fostering a diverse and inclusive workforce.

Diversity is not enough on its own—inclusion must be a key priority for real success. As such, Weatherford is seeking to offer more inclusion training globally in 2020, especially for its front-line managers. Critical to that effort is the company’s NextGen program, a leadership development initiative for field engineers that has been well received by both the newest team members and veteran field leadership.

What drives strong technology innovation and deployment is also the bedrock of D&I: culture. Organizational culture encompasses the values and behaviors that contribute to the unique social and psychological environment of a business. For D&I to take root, an influential culture must be perpetuated to seed, nurture and maintain collaboration, ethics, integrity and a willingness to innovate, both technologically and behaviorally.

As the petroleum industry moves into a new age of digitalization and navigates a fourth industrial revolution, it is essential to recognize the role of diversity. Diverse teams are more productive and perform better. More importantly, diverse cultural perspectives can inspire creativity and inspire fervent customer problem-solving innovators.

Weatherford is changing, just as the industry in which it operates and the world in which we live. The company’s continued success is dependent on employee buy-in of a genuine and transparent commitment to D&I, the result of which will be an increased market share, improved earnings and the company’s continued reputation as a solutions provider rather than a widget manufacturer.

Changing minds and interpretations of what it means to be a diverse and inclusive organization takes novel forms. More than 4,000 employees, mostly middle managers and front-line leaders, have been tasked with “unfreezing” their perception of a diverse global workforce and devising ways to become more productive, less stressed and consciously aware of living in the present, both personally and professionally. They are challenged to think about their “Blue Chips,” which are their most important professional and personal priorities, and to put more focus and energy toward those items moving forward.

The hard reality is that organizational culture change cannot be successful if not cascaded from the highest level. Silos must be razed, and retention must be a focus. Leadership must be physically and emotionally engaged, not by appearance but by action. The formula is simple math: Discussion plus awareness equals behavioral change because diversity is more than programs and metrics. It is a healthy culture, built and sustained by collaboration and teamwork. Those elements working together are the difference between an organization that is “to be” rather than “to seem.”