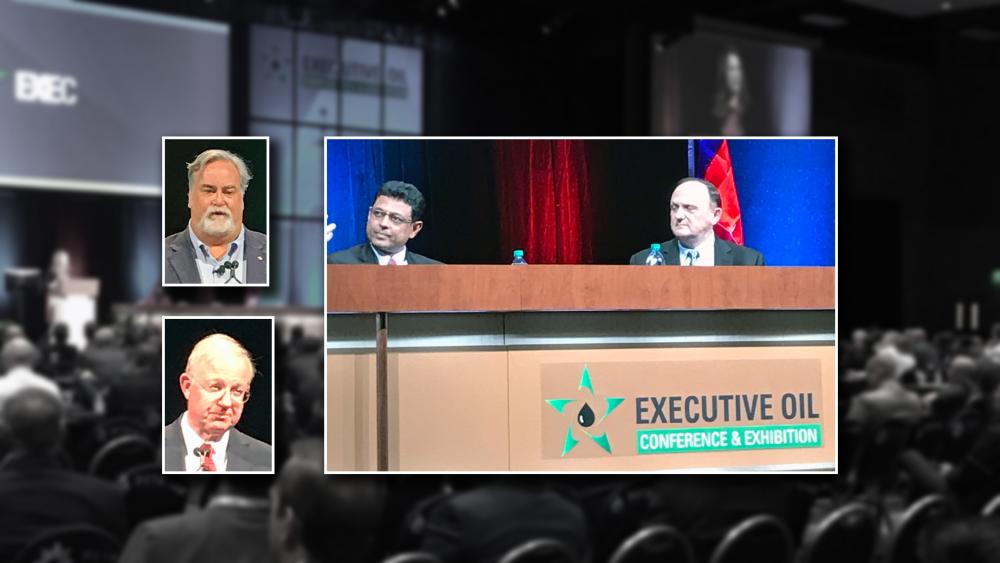 MIDLAND, Texas—Knowledge is king in the oil patch and sweeping technological innovation has granted producers sovereignty.

“You have to know the rock and be able to innovate quickly,” Phil Webb, COO of Surge Energy, told attendees of Hart Energy’s Executive Oil Conference on Nov. 7.

Know these—viscosity, velocity and proppant size—and you have the advantage.

“The tools to steer wells are incredible today, and now the effort is to accurately quantify the subsurface volume,” said Allen Gilmer, co-founder and executive chairman of Drillinginfo Inc. The goal, said members of the afternoon “positive sum production” roundtable, is to wrest as many boe/d as possible per dollar invested.

Prior to the afternoon break, the topic shifted to geopolitics, specifically the murder of Washington Post columnist Jamal Ahmad Khashoggi by Saudi Arabian operatives in early October in that country’s consulate in Istanbul, Turkey.

“The Khashoggi execution will likely have far-reaching, negative impacts on Saudi Arabia’s world standing, including the end of its hopes for its IPO for Saudi Aramco,” said Tom Petrie, founder of Petrie Partners.

Earlier in the day, Bill Wren of the University of Texas at Austin’s McDonald Observatory discussed how he works with the industry in the Permian Basin to keep the night skies dark to the benefit of both astronomers and operators.

Wren said that such collaboration entails the use of shielded lighting fixtures as well as aiming lights downward. Those suggestions benefit the industry as well because they reduce glare and enhance visibility, he said. Full cutoff fixtures, warmer color temperatures and improved management of flares are some of the actions the industry can take that work well for both industry and the observatory’s Hobby-Eberly Telescope, third-largest in the world.

The panelists examined pricey tracts of land in the basin. Bids on the Bureau of Land Management’s 50,000 acres in New Mexico totaled $972 million. That’s partly the acres are in the prolific Delaware Basin and partly because the tracts are longer. Pricees for side-by-side parcels swung from $300 to $2,500 per acre based on the ability to accommodate 2-mile laterals.

Very large firms will be able to swallow a percentage of leaseholds with a low cost of capital, with the result that the big get much bigger, panelists said. As these companies consolidate, they will shed non-core assets down the chain.

For the smaller companies, the story is a bit different. Panelists said it’s likely that small to mid-sized Permian E&Ps can expect stock-heavy offers and a pittance of cash these days.

Earlier, the conference kicked off with a focus on the Permian, which for supermajor Shell Oil Co. (NYSE: RDS.A), is home, sweet home.

Shell views shales as a complement to its vast international and deepwater portfolio, Gretchen Watkins, the company’s executive vice president for upstream unconventionals, told attendees. Shell plans to grow its Permian production from the current average of 120,000 barrels of oil equivalent per day (boe/d) today to 200,000 boe/d by 2020.

“Reducing flaring is critical for the industry’s social license to operate,” Watkins said, adding that economic production was also key. Shell has stopped installing flare stacks on its new well pads in the Permian, she said.

The importance of the basin was underscored by Reed Olmstead, director of North American onshore research and business development for IHS Markit. The dramatic growth in U.S. crude oil supply—1.3 million barrels per day (bbl/d) in 2018 alone—is propelled by strong Permian Basin production.

As takeaway constraints are relieved, Olmstead believes U.S. crude supply will grow another 1.5 million bbl/d in 2019, but pipeline bottlenecks will likely keep Midland and Cushing, Okla., hub differentials wide well into next year, with no easing expected until 2020, he said.

The entrance of global operators into the Permian will change the activity profile of the play, said members of the takeaway roundtable. That is because programs executed by multinationals tend to be stable and less sensitive to volatile oil prices.

Steve Pruett, president and CEO of Elevation Resources LLC, said there are lots of incentives for companies to delay completions at the moment, but this is just a pause. At this point, he sees uncertainties above ground outweighing those below the ground.

One issue to be reckoned with: water.

“We plan for water as much as we plan for oil,” said Carrie Endorf, vice president for reservoir engineering and planning at Parsley Energy (NYSE: PE).

But once those issues are resolved, those massive volumes of Permian crude need a destination, said Joel Fry, principal at Tailwater Capital.

“It has to be exported, and we need the infrastructure and the market destinations for Permian Basin crude,” he said. “It’s a global issue.”